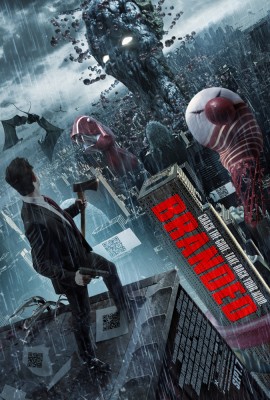 Branded feels a lot like it was made as the final project for a social economics class at a liberal arts university. I attended such a university, but the previous statement is not meant to be a compliment. A blunt sendup of corporate dominance, capitalism and fast food, Branded is smug and self-satisfied, and grows tiresome long before it reaches its nonsensical third act. Directors Jamie Bradshaw and Aleksandr Dulerayn at least make the film visually stimulating, and lead actors Ed Stoppard and Leelee Sobieski manage to get through pages of inane dialogue without rolling their eyes. Somehow Jeffrey Tambor and Max von Sydow got roped into this mess, too, and I hope the veteran actors didn't sign on out of financial desperation. Branded is what happens when filmmakers take on obvious targets with reheated criticisms and weak resolve. Branded is less a film than a half-assed term paper.

With such a strange final act, it's difficult to describe the basic direction of the film's narrative. Long story short, the heads of the world's fast food giants come to a veteran marketing exec (von Sydow) when their profits hit record lows. The exec proposes a radical new plan to make fat beautiful again, and third-world markets like Russia and Kenya will be the first targets. That said, the film follows hotshot ad man Misha Galkin (Stoppard), who becomes unwittingly wrapped up in the whole debacle thanks to his boss (Tambor) and love interest, Abby (Sobieski). Seemingly overnight, Moscow is saturated with pro-consumption ads for a McDonald's like chain called "The Burger," and Misha begins a whole new platform of irresponsible advertising for his own clients.

What makes Branded one big, sloppy mess is its inability to focus on one target. The film takes shots at everything from KFC to Apple, but it never really makes a point. The idea that society is obsessed with branding is an interesting one, but Branded gets too wrapped up in condemning obesity and the corporate culture to make an intelligent argument about its main subject. The third act is borderline incomprehensible, and involves Misha taking some kind of blood oath that allows him to see voluminous creatures floating above consumers' heads. Said creatures then battle for market dominance. The winner becomes the new corporate fad, and the loser goes bankrupt. Yeah, it doesn't make much sense in the movie, either.

The film is at least somewhat visually stimulating on its limited budget, and the directors are able to capture some nice shots of downtown Moscow. The third-act creatures are imaginative if ridiculous, and some of the faux advertisements are creative. It's too bad Branded doesn't explore the cheeky advertisements more, as its best moments are watching Misha cut trailers for a violent horror flick that have absolutely nothing to do with the film. A film about branding in modern society might have been interesting, but Branded is nothing more than an overreaching bully pulpit. The film feels like it was made by a bunch of out-of-work whiners, and it hardly makes the case to limit advertising.

The 2.40:1/1080p/AVC-encoded transfer looks fairly good, with decent detail and texture in both close-ups and wide shots. Colors are bold and well saturated, and black crush is minimal. There is a fair amount of banding between fade-outs, and I noticed some minor aliasing.

The 5.1 DTS-HD Master Audio soundtrack is strong, with decent surround action and immersive elements. Dialogue is crystal clear, and ambient effects like traffic and office hum surround the viewer. Action effects are pronounced, and a riot late in the film is quite impressive. There is good balance between dialogue, effects and score. English, English SDH and Spanish subtitles are available.

The Commentary with Writers, Directors and Producers Jamie Bradshaw and Aleksandr Dulerayn is a bust, and the filmmakers offer little explanation as to why the film is such a mess. The pair gratingly narrates what is happening on screen, and little anecdotal flair is provided. Also included are Theatrical Trailer 1 (2:31/HD) and Theatrical Trailer 2 (2:32/HD).

Yeah, yeah; fast food is unhealthy, society is obsessed with branding, and marketing is misleading. Tell me something I don't know. Branded is a hot mess of undercooked nonsense that feels like some sociology major's wet dream. This crock of overbroad criticism can barely focus long enough to tell its incomprehensible story, which is something about a hotshot ad man getting wrapped up in a bizarre corporate war. Skip It.