What Ever Happened to Baby Jane: 50th Anniversary Edition


"Whatever Happened to Baby Jane" is no easy film to classify; without a doubt, the dual-lead performances by Bette Davis and Joan Crawford, the former of who secured an Academy Award nomination for, are worth the price of multiple admissions. The difficulty lies in whether "Whatever Happened to Baby Jane" is a legitimately classic psychological thriller or merely an exercise in campy acting and preposterous plotting that is irresistible to the human eye. Masterfully directed by Robert Aldrich, the 1962 film, based on a novel of the same title, tells the tale of sisters Blanche (Crawford) and "Baby Jane" Hudson (Davis), the latter a child star whose shine tarnished later in life as her sister's foray into acting took off full steam. Things take an irrevocable turn at the end of the film's prologue when one of the sisters (it's clearly shown) causes a tragic accident that ends the career of Blanche by leaving her paralyzed from the waist down. 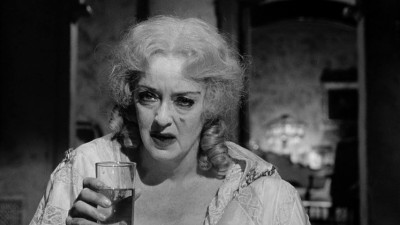 As the film's opening titles come to a close, viewers are introduced to the now older sisters, holed-up tight in a mansion, with the psychotic in appearance and demeanor, "Baby Jane" caring (to use the term loosely) for his bed-ridden sister. The film starts of quite strongly, revealing Jane's cruel treatment and psychological torture of her sister through verbal abuse and mockingly serving Blanche's beloved parakeet on a platter for lunch. All the while, Jane cackles like a madwoman, eyes wide with lunacy and a face caked with horrific make-up, a constant reminder that Jane tragically clings to her career, decades long past. Davis' performance is, to use a truly clichéd phrase, absolutely electric and eventually overshadows much of the film's massive shortcomings and leaps in logic. The role is a marked departure from the actresses' prior efforts in melodramas and there's no doubt, Davis is having fun in the role. Subtler though, is Crawford's performance as Blanche; Crawford perfectly captures the physically broken and emotionally unraveling hostage to Jane's madness. In the hands of a lesser actress, Blanche would feel more like an object necessary to let Davis go wild, but Crawford brings dignity to the role and truly earns her double-billing. 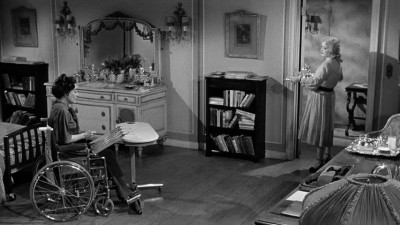 Where "What Happened to Baby Jane" goes off the rails, ever so-slightly, but enough to deny it of masterpiece status, is its eventually meandering plot, revolving around Jane's own manipulation by con-man Edwin Flagg (Victor Buono, in an Oscar nominated performance originally meant for Peter Lawford), as well as a bevy of supporting characters who may be the dumbest ever written and put on the screen in such a solidly produced and otherwise, well acted film. As Flagg's fleecing of Jane increases, it serves as a catalyst for Jane to increase her horrific behavior and treatment of her sister to the point of criminality; the film teases possible discovery by outsiders, including the sisters' long-suffering maid, but the story undermines the brilliant tension Aldrich creates by quickly and illogically resolving these teases. At 133 minutes, the film struggles to firmly cement true terror with all these false moments and the resolution, while shocking and memorable, feels morbidly comedic as a result. 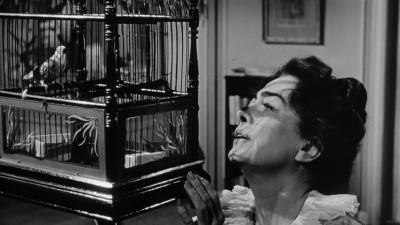 I'd be remiss if I didn't praise Ernest Haller's exquisite cinematography, which next to the performances of Davis, Crawford, and Buono (who earns his nomination, but whose own over-the-top performance feels lacking alongside Davis') is another necessary reason the film screams to be watched. While filmed and set in the 1960s, Haller manages to give the film the look of a late-40s to early-50s piece and the result is a sinister time capsule in which the Hudson sisters are locked. Frankly, "What Ever Happened to Baby Jane" is a very, very good film, but for more than a few unintentional reasons. On repeat viewings Davis' performance is a guilty pleasure that one revels in, rather than fears and the stupidity of the supporting cast will always garner chuckles and eye-rolls. It's the rare film that can truly horrify in certain instances, yet provide tremendous entertainment as pure camp; in other words, mandatory viewing.


The 1.78:1 anamorphic widescreen transfer is incredibly crisp and vibrant, capturing the look of a bygone era, despite being produced in the early 60s; knowing this fact makes one appreciate the quality of the transfer all the more. Contrast levels are spot-on, key to building suspense without losing detail in any number of the film's dark, brooding scenes. Detail is well above average with no signs of digital tinkering or compression artifacts.


The Dolby Digital English mono soundtrack is a very clear, clean mix. At times it could easily be mistaken for a stereo track with its perfect balance between music, dialogue and effects, with no single element feeling lost in the shuffle.


Disc one contains a feature-length commentary by Charles Busch and John Epperson; while not film scholars, the duo is a solid choice to discuss the film's high camp factor. Disc two contains three full documentaries including "Bette and Joan: Blind Ambition," "All About Bette," and "Film Profile: Joan Crawford." Rounding out these features are a brief making-of featurette titled "Behind the Scenes with Baby Jane" and an excerpt from "The Andy Williams Show" featuring Bette Davis.

While just a tad bloated and populated by poorly written supporting characters, "Whatever Happened to Baby Jane" isn't a film you'll watch nor revisit for any reason but to watch Davis and Crawford work their magic. The performances from both women show that camp is just as much an art form as serious drama and the result, especially in Davis' case, is a career highlight performance. Add to that, a solid technical offering from Warner and this is a disc waiting to find a home on your shelf. "Highly Recommended."