With Bloomer Girl, the folks at Video Artists International (VAI) unearth another interesting, obscure artifact from the early days of live TV. Originally aired as an episode of Producer's Showcase on May 28, 1956, Bloomer Girl re-mounts one of the stirring, message-heavy musicals that came about as a result of Oklahoma's precedent-setting success from a decade earlier. The stage musical enjoyed a good-sized run in 1944-46, so the live TV version would have made sense. What the producers at the time didn't realize is that Bloomer Girl (unlike Oklahoma) would never have another revival on Broadway again. Aside from the original cast recording album, this performance - preserved on this DVD as a black and white kinescope - remains the only visual record of this one-time stage hit.

Based on the evidence on this DVD, the entertaining yet frustrating mishmash of Bloomer Girl reveals why it was a big hit in the '40s, yet also destined for Broadway-geek obscurity. The basic story - about a headstrong Civil War-era maiden who becomes the protégé of her eccentric feminist/abolitionist aunt - served a dual purpose as cozy Americana and as a vehicle for progressive, proto-P.C. ideas (including a sympathetic view towards race relations). Sid Herzig and Fred Saidy's book details the goings-on of the Applegates, a prosperous family in an 1861 industrial town on the Northern Atlantic coast. While the older Applegate daughters await their husbands' return from war duty, youngest daughter Evelina (Barbara Cook) is causing consternation with the parents (Paul Ford and Nydia Westman) for her rebellious personality and refusal to settle down. Evelina's father, hoop skirt magnate Horatio, decides to set her up with a handsome traveling salesman, Jeff Calhoun (Keith Andes). Although Evelina and Jeff, a slave-owning Southerner, seem to like each other, she's too dedicated to the industrial and political causes of her pantaloon-manufacturing aunt Dolly Bloomer (Carmen Mathews as the only character in the show based on a real person) to think about marriage. Aunt Dolly serves as the town's de facto firebrand; her controversial status in the community becomes intensified when it's revealed that she helped smuggle a Southern black man to freedom - Pompey (Rawn Spearman), who happens to be Jeff's former slave.

Although the televised Bloomer Girl omits some dialogue and a few of Harold Arlen and E. Y. "Yip" Harburg's songs, the presentation adheres closely to how it was done on stage. The story is enjoyable if somewhat schizophrenic and hard to follow, supported by music that covers all the '40s musical bases - fun, elaborately staged set piece ("It Was Good Enough for Grandma"), typical yet lyrically clever ballad ("Evelina"), go-and-get-'em inspirational screed ("The Eagle and Me"). Arlen and Harburg's contributions serve their purpose well, it's just not a terribly memorable score (and a far cry from "Over the Rainbow" and their other Wizard of Oz tunes). It's all performed by a cast that is spirited yet strangely colorless compared with the ladies and gents on the original cast recording. Barbara Cook makes for an enjoyably pert Evelina, but she's a little too perfect compared with the quirky-voiced Celeste Holm from the original (wonder if the two actresses compared notes when they got together for The Yeomen of the Guard the following year?). The pleasant tenor of Keith Andes is a nice surprise, but he seems a bit wan against the OCR's David Brooks. On Broadway, the part of escaped slave Pompey was played by Casablanca's Dooley Wilson. The smiley, kinda bland Rawn Spearman does a decent enough job with Pompey, but like Cook he lacks the original performer's quirk and personality.

The definite, no-question-about-it highlight of Bloomer Girl? Agnes De Mille's choreography. Bloomer came a few years after De Mille worked on Oklahoma and, while the dancing is very much in the mold of the earlier show, the very presence of her modern, defiantly out-there choreography elevates the show's not so thrilling book and music. The Bloomer Girl ballet of women anxiously awaiting their men returning from war has the same feel as Oklahoma's dream ballet. The TV version even uses the same dancers from the stage production - making it a valuable historic record of WWII-era musical history.

Compared with The Yeomen of the Guard, the other VAI live TV on DVD extravaganza I recently reviewed, Bloomer Girl comes across as downright clunky and much more typical of what you'd imagine average live productions from that period were like. The direction is flat and many of the performances pale next to their '40s stage counterparts. While it has some appeal for theatre historians (and that dance sequence is a must-see for dance students), Evelina and her bloomers ultimately don't have the legs to stand up to more than one cursory viewing. 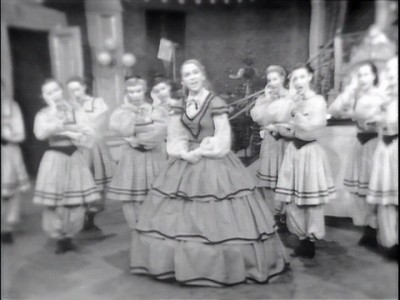 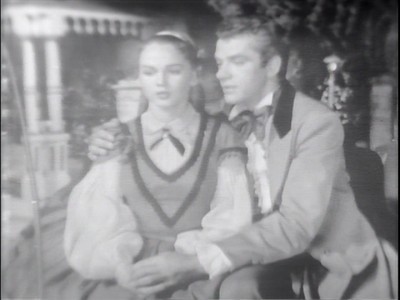 As with the content of the show itself, the video image on Bloomer Girl suffers in comparison with The Yeomen of the Guard. The 4:3 black and white image has the persistent waves and lack of contrast one usually finds on kinescopes, compounded with a persistent blur around the edges (maybe this should have been billed as having added Daguerrotype-O-Vision?).

Again, the disc's mono soundtrack sounds somewhat thin and raggedy compared with Yeoman, but at least it's decent sounding and evenly mixed. No subtitle options are provided.

Like The Yeoman of the Guard the telecast's original commercials are furnished as a separate bonus "for fans of vintage television". Running just under 10 minutes, the kitschy program shills the latest products from the Ford Motor Company (dig those sleek convertibles!) and RCA Victor (only $329.95 for a brand new television? Sign me up!). Also included with the DVD is a 10-minute More from VAI featurette showing highlights from the company's other offerings and a paper insert outlining the cast, crew, and a detailed DVD chapter list.

VAI's DVD edition of the 1956 televised Broadway musical Bloomer Girl is pure catnip for theater nerds, others might want to proceed with caution. The show's not-so-memorable score and ho-hum performances make it more of a curiosity than a keeper. The best reason to check this out: Agnes de Mille's daring choreography on the musical's ballet sequence (which employs the original dancers from the stage production, making it a priceless historic record of the show's 1944-46 stage run) - even on blurry black and white kinescope, it dazzles. Rent It. 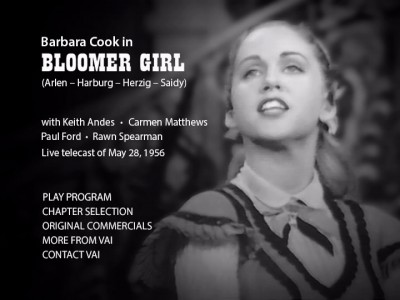 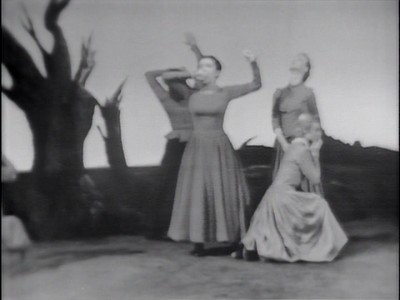