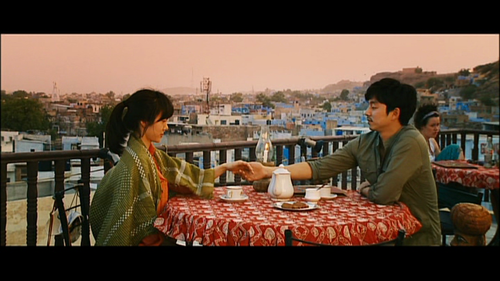 If given the opportunity, would you make an effort to correct a past wrong - or is it better to just "live and learn" and move on?

The airy Korean romantic comedy Finding Mr. Destiny centers itself around that idea, which gives it a bit more universal appeal than the standard-issue cutesy rom-com that this DVD's packaging implies. Despite (or maybe because of) its quirkiness, the film's upbeat message and charming lead performers are enough to make it a good example of mainstream Asian cinema.

Adapted from the stage musical Finding Kim Jong-wook (the Korean Mamma Mia!?) that enjoyed a healthy run in its native country, Finding Mr. Destiny follows a workoholic, stubbornly single stage director as she embarks on finding her first love through the help of a geeky yet eager-to-please entrepeneur. She's a slovenly mess and he's a neat freak, so you know where that's heading - but the script is appealingly handled, serving as an excellent vehicle for its attractive stars, Im Soo-jung (the Korean Katherine Heigl?) and Gong Yoo (the Korean Ryan Gosling?).

Finding Mr. Destiny's feathery plot probably won't win any awards for originality, but the relatable characters and engaging setup go a long way toward making the film work. The story centers around Seo Ji-Woo (Im Soo-jung), a harried theatrical director who is too involved in overseeing production on the gala musical Last Show to have much of a personal life. She's intelligent and self-sufficient, but rejecting a proposal from a handsome suitor becomes the latest, most annoying signal that she needs a relationship intervention from her ex-military dad (Cheon Ho-jin) and her man-hungry sister (Lee Cheong-a). When dad sets her up with a humble "finder of lost loves" outfit operated by nerdy ex-travel agent Han Gi-Joon (Gong Yoo), Ji-Woo takes it as an opportunity to reconnect with a man she met a decade prior on a trip to India. Armed with only the guy's name, Gi-Joon and Ji-Woo embark on a cross-country jaunt to find the man who haunts her memories. Meanwhile, production on Last Show becomes derailed by an accident involving the show's tempremental star (Su-Keong Jeon) and an unplanned vacancy by a cast member that Ji-Woo takes it upon herself to fill. As Gi-Joon gradually finds himself falling for his client, will Ji-Woo eventually catch up with her past infatuation - or is a different "Destiny Midnight" in the cards for her? 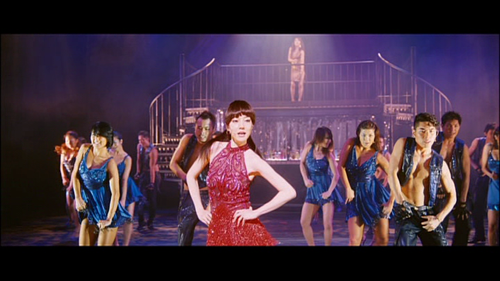 In the end, Finding Mr. Destiny winds up being a surprisingly enjoyable effort with some good performances by the leads. There are a few oddly chosen elements that take some time to adjust too, however. While the story is basically a solidly performed, emotionally resonant drama, it is punctuated with off-beat humor (often accentuated with goofy sound effects and music) which might be likened to a live-action version of anime. While strange at first, it's actually pretty funny. This was the first film for director Chang Yeo-jung, who also helmed the stage version of Mr. Destiny, and her efforts are generally good and on-par with most mainstream Asian films. Ironically, the only place where the direction falters comes during the lavishly staged climactic musical number in which Ji-Woo steps in for a missing cast member (with no understudy?). The song itself is an odd Chicago-ish strutter with an English chorus - "Destiny Midnight" - of random words meant to evoke a mood (like ABBA's "Summer Night City"). While one could see where it could have worked in the stage version, the listlessness of the direction and actress Im Soo-jung's perfomance only emphasize that the entire stage-show subplot is completely unnecessary. Speaking of unnecessary, there's also a coda at film's end which seems too precious and overwrought to be truly believable - scenes like that make it a little too unwieldly for its own good. Extraneous baggage aside, this romantic comedy brims with energy. What I most enjoyed about it: the lead actors' oil-and-water friction and some lush photography of Korea and India (apparently this was the first Korean film shot in that country; they came back home with a lot of nice footage).

Despite its flaws, it's the more intimate aspects of Finding Mr. Destiny that make it sing - the lead performers' chemistry, and the theme of searching for that missing something that you eventually realize isn't missing after all. 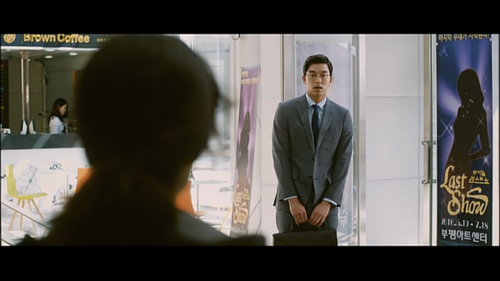 Five Points Pictures and CJ Entertainment have given Finding Mr. Destiny an exellent presentation on DVD, starting with the feature's visuals. The film's letterboxed 2.35:1 image has some interlacing issues, but the film's evocative photography (presumably shot on film) is given a fine treament in anamorphic widescreen. The extras are 4:3 and have a compressed, flat quality.

A Korean 5.1 soundtrack is the disc's sole audio option, a full-bodied mix with clear dialogue, immersive ambient sound and a crytalline music track that never overwhelms the other elements. Optional English subtitles are provided, either in standard white or white and yellow (whenever two characters are simultaneously speaking) - a nice touch.

The disc includes a great assortment of extras, mostly obsequious featurettes, but they also contain some valuable info geared toward American viewers who might not be familiar with the film's back story, the actors, or certain gags that are geared toward an in-the-know Korean audience. The main featurette, The Making of Finding Mr. Destiny (24:26), compiles some brief interviews with the cast and crew (all of whom seem exceedingly polite). Production Short (3:07) briefs us on the film's sojourn shooting in India (the first Korean production to do so). Poster Shoot (1:03) follows Im Soo-jung and Gong Yoo during photography sessions for the marketing material, which has them glammed up in ways that their characters are never seen. There's also a music video with English subtitles, A Second First Love (2:44), which is sung by actor Gong Yoo over the closing credits. A battery of text-only extras include an interview with director Chang Yoo-jeong, cast and crew bios, an article on the Indian location shoot, and a brief bit explaining a gag which would be lost on a non-Asian audience. The film's TV Commercial, an Original Trailer and Trailers for Five Points Pictures releases Tazza: The High Rollers and Moss round out the bonus content.

The cute yet bloated Finding Mr. Destiny nearly collapses under its own scattered ambitions. Is it a story of personal redemption, a fun musical, or a happy-go-lucky tale of opposites attracting? How about all three! Despite all that, this Korean romantic comedy glides along winningly on the considerable charm of actors Im Soo-jung and Gong Yoo. It sure beats the hell out of whatever Jennifer Aniston is slumming in these days. Recommended. 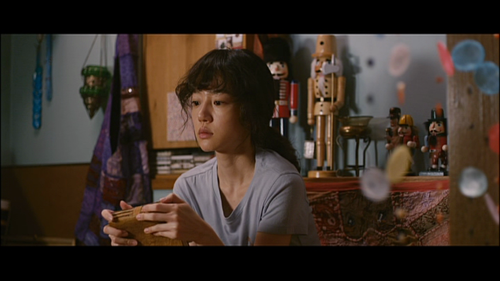