World Was His Jury, The

Other // Unrated // August 7, 2012 // Region 0
List Price: $20.95 [Buy now and save at Amazon]
Review by Stuart Galbraith IV | posted December 22, 2012 | E-mail the Author
The World Was His Jury (1958) is a pretty decent courtroom drama starring Edmond O'Brien as a famous attorney defending a cruise ship captain accused of criminal negligence after his ship catches fire. Produced by Sam Katzman's Clover Productions, Columbia Picture's B-movie unit, the film seems to have been a slightly bigger and classier production than Clover's usual output. It has a more prestigious leading man in Edmond O'Brien while its running time, 82 minutes, is longer than the usual Clover second feature.

Probably this is because The World Was His Jury all too clearly is trying to steal the thunder surrounding Hammond Innes's bestselling novel The Wreck of the Mary Deare (1956), which had an almost identical story and was soon to be made into a big-budget movie starring Gary Cooper and Charlton Heston. The movie was just one of five 1958 releases directed by Fred F. Sears, quite an accomplishment considering he died in November 1957. Sears, a former B-Western actor, was only 44 and apparently had worked himself to death. Although he directed his share of literal turkeys (i.e., 1957's The Giant Claw), Sears was efficient and talented at once, and many of his films, this one included, are rather good.

A Sony Pictures' "Choice Classic" manufactured-on-demand title, The World Was His Jury is presented is its correct 1.85:1 widescreen aspect ratio with 16:9 enhancement. It's a typically strong transfer from good ol' reliable Sony. 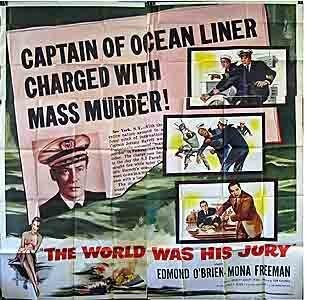 After the captain of the luxury liner S.S. Paradise dies suddenly, First Officer Jerry Barrett (Robert McQueeney) is appointed interim captain. But while he's dining with passengers on the last night of the voyage a fire breaks out. Barrett is hit in the head by some falling debris, and First Officer Martin Ranker (Paul Birch, in a scenery chewing, monologue-heavy role) instead orders the first wave of emergency procedures until Barrett recovers.

There much pandemonium aboard the burning vessel; 162 die and many more are injured, though Barrett escapes unscathed. However, public opinion quickly turns against him, and his children are taunted by classmates and hounded by reporters. Barrett's found guilty of gross negligence by a maritime review board that also recommends federal prosecutors charge him with manslaughter.

Even though initially he too believes him guilty, famous, Perry Mason-like celebrity attorney David Carson (Edmond O'Brien) eagerly takes Barrett's case. This doesn't sit well with David's wife, Robin (Mona Freeman), who is ashamed that her husband would defend such an obviously guilty client.

The movie opens with the fire breaking out aboard the S.S. Paradise and this sequence features some impressive visual effects, but all of it appears to be stock footage. The IMDb and other sources don't identify it, but I'd bet dollars to doughnuts that it's footage from Dante's Inferno, the 1935 Spencer Tracy film that climaxes with a ship, also named the S.S. Paradise, catching fire while at sea. (Both films have story elements suggested by the deadly 1934 fire aboard the S.S. Morro Castle.)

Although in all likelihood filmed before the September 1957 premiere of TV's Perry Mason, O'Brien's character has many of Perry's attributes, including an extraordinarily impressive winning record ("140 straight acquittals") and a Paul Drake-like associate, private investigator Tony Armand (John Beradino). Herbert Abbott Spiro's screenplay is similarly interested in legal minutiae and procedural maneuvering (there's a great overuse here of both sides wanting testimony "stricken from the record") though O'Brien's mouthpiece has a much more acrimonious relationship with the judge (Harvey Stephens), which turns out later to be a strategic move on O'Brien's part.

The film was O'Brien's last leading role in a Hollywood film, though he would headline the French-made noir The Ambitious One the following year. O'Brien would, of course, enjoy a good 15 more years as an exceptional character actor in films like Fantastic Voyage (1966) and The Wild Bunch (1969), this despite advancing Alzheimer's disease who roots may date as far back as 1953, when director Don Siegel first noticed symptoms. Indeed, in The World Was His Jury O'Brien often refers to "courtroom documents" that camera angles reveal to be O'Brien's annotated script.

Presented in its original widescreen with 16:9 enhancement, The World Was His Jury looks great on DVD, the black and white image so sharp that one can see a big hair sticking out of Mona Freeman's cheek in one shot, and an even bigger hair protruding from the tip of O'Brien's nose in another. There are no menu screens; the movie simply begins then restarts automatically after it's done. The mono audio (English only, not subtitle options) is fine and the disc is region-free. No Extra Features.

Though hardly in the class of, say, Anatomy of a Murder or even The Wreck of the Mary Deare, The World Was His Jury aims to please, and does. Sony is really doing a fine job with these '50s-era second features, almost all of which are entertaining and worthwhile. Recommended.