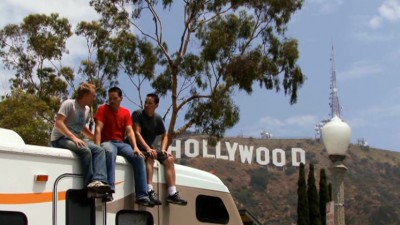 The poster tagline for 2011's documentary Hollywood To Dollywood - "Twin brothers with a dream in an RV named Jolene..." - accurately captures the feel of this lightweight but thoroughly enjoyable little film. The project follows a pair of gay twin brothers - major fans of Country music icon Dolly Parton - as they embark on a 2,100 mile trip to give their idol a copy of the film script they've written especially for her.

The film's main subjects, 35 year-olds Gary and Larry Lane, are a pair of sweet, unpretentious North Carolina boys-turned-Hollywood scenesters. They've been situated in Los Angeles for most of their adult lives, sure, but there's still a whole lot of country in them. In the introductory scenes, the boyishly handsome duo are seen shopping around their screenplay. The script, a Southern-set comedy/drama with several meaty female roles (the guys don't go into too much detail on that subject), was inspired by Gary and Larry's small town upbringing and Dolly Parton's songs. Their ultimate goal is to present the script to Dolly during her appearances at the 25th anniversary of her Pigeon Forge, Tennessee theme park, Dollywood.

As Gary and Larry, accompanied by Gary's cute boyfriend Mike, discuss the iconic Dolly and the script with some of their Hollywood friends, the film takes on the feel of a Logo channel reality show (unsurprisingly, the director has a background in reality show pilots). The guys' visits with out actors Chad Allen and Leslie Jordan (Will & Grace), character actress Beth Grant (Jericho), and screenwriter Dustin Lance Black (Milk) carry the stong whiff of contrivance, but they're fun and the twins' enthusiasm about their pet project is totally contagious.

When Gary, Larry and Mike embark on their 5-day RV trip, the film shifts gears somewhat, becoming a hybrid of carefree road trip and probing examination of the Southern American LGBT community (at times it reminded me of a milder version of the 2007 doc Small Town Gay Bar). The trip coincided with the massive flooding which affected Nashville in the Summer of 2010, which is depicted via shots of Gary and Larry attempting to keep updated while they playfully snipe at each other. As the trio chat with various fellow travelers, visit with an Arkansas hairdresser who came out to his wife and son in his thirties, and party with a bar full of fellow Dolly worshippers in Nashville, one gets a decent feel for how well the gay sensibility has penetrated this still conservative region. The twins' arrival at Dollywood becomes the emotional highlight as the men come to grips with their Southern identity and their complicated familial relationship (as for whether they get to meet Dolly, I'm staying mum). The qualities Gary and Larry admire about Dolly become the central theme of the film itself - a good-natured embrace of generosity, unconditional acceptance, and the celebration of the inner freak in all of us.

Director John Lavin filmed Hollywood To Dollywood accompanied by a two-person crew over a period of only a few weeks. The production never truly gets over its own modesty (at times it feels like a home movie straight out of YouTube), but it does a good job in showing a middle America still set in its ways but inching ever-so-gradually towards acceptance. Dolly Parton donated the use of several of her songs to the film (with the proceeds going toward her literacy awareness program), which add a lot to the honey-dripped Southernness of this compelling documentary. 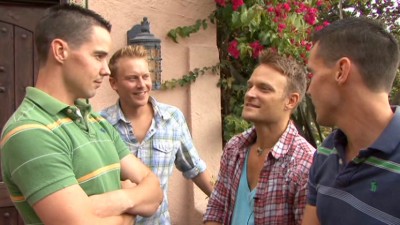 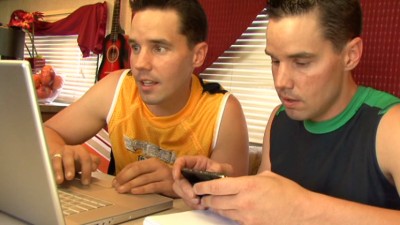 Breaking Glass Pictures' DVD of Hollywood To Dollywood sports an adequate transfer for this digitally-shot documentary. It might have been the source photography, but the 16:9 picture gets noticeably digitized sometimes with jagged edges and spotchy gradations. Colors and light levels are OK.

Sound-wise, Hollywood To Dollywood has the typical feel of low-budget documentaries shot with available sound. The stereo track isn't too bad overall, with dialogue occasionally becoming indistinct or echo. The songs are mixed in at much louder levels to the effect that they smother the rest of the soundtrack (good if you dig Dolly's music, I suppose). No subtitles are provided with this disc.

Hollywood To Dollywood might be a slight journey at 79 minutes, but Breaking Glass seems to have compensated with the RV-sized bonus content on its DVD edition of the film. Totaling about 86 minutes, the extra interviews, candid footage, and outtakes include the following:

It wouldn't be too far-off to call Hollywood To Dollywood a glorified home movie, but I enjoyed this breezy documentary of twin brothers and major Dolly Parton fans embarking on a cross-country journey to contact their idol. One doesn't even need to be a fan of Dolly or her music to appreciate its positive "be proud of who you are" message. Recommended. 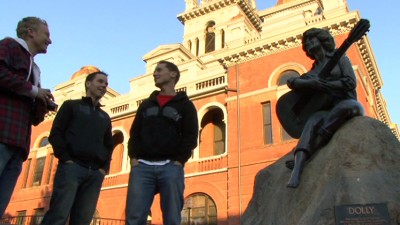 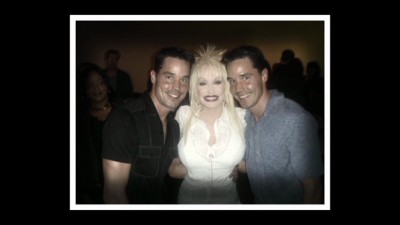