Ever hear of the child's book called The Little Engine That Could? 1953's surprise hit The Little Fugitive is The Little Film That Could. Kino's beautifully done blu ray edition serves as a great excuse to revisit this charming classic.

The film, which follows a little boy as he spends an eventful day and evening at New York's Coney Island (really - that's about it), has had an influence which stands in marked contrast with its humble concept and execution. Husband-and-wife photographers Morris Engel and Ruth Orkin, working with collaborator Ray Ashley, conceived The Little Fugitive as a slice-of-life look at the way children perceive things in an urban environment. The $30,000 film was shot with a single hand-held camera (constructed by Engel especially for this project), using a small cast of mostly non-professionals, and a script that made ample use of Coney Island and other outdoor locales. This do-it-yourself filmmaking method was mostly unprecedented (in the U.S., anyhow), which led many to peg it as the first modern American indie film - and a towering influence on the French New Wave movement.

The slight but endearing story in The Little Fugitive centers around Joey (Richie Andrusco), a freckle-faced boy of seven years. Like other kids that age, Joey's main concern is fitting in with his big brother Lennie (Richard Brewster), who wants nothing to do with the annoying twerp. As Lennie and his two pals conspire ways to get cash to go to Coney Island for Lennie's birthday, Joey occupies himself with chalk drawings and watching cowboy shows on TV. When the boys' mother (Winifred Cushing) is called away on a family emergency, Lennie is left to care for his brother for the weekend. Instead of being responsible, however, he decides to gang up with his buddies to play a cruel trick on Joey, making him believe that he fatally shot his own brother with a toy rifle. The frightened "Little Fugitive" escapes on a train and follows the crowd at the line's final stop - Coney Island.

Joey's exploration of the amusement park, making up the bulk of the film, transforms this intriguing yet flawed little domestic drama into a memorable, impressionistic time capsule of 1950s New York. One gets a strong feel of the filmmakers' empathy for their subject as Joey is seen at child-height - casually walking about, playing midway games, eating junk food, and basically forgetting the fracas that got him there in the first place. It's actually a terrific segment, brimming with the natural, spontaneous performance of the kid and a wonderful sense of the bustling environment (I wonder how they managed to avoid passers-by staring into the camera?). Casual scenes of activity are interspersed with a few scripted moments, with Joey encountering an energetic photographer (Will Lee, better known as Sesame Street's Mr. Hooper) and a friendly pony ride operator (Jay Williams) who eventually finds out why Joey is hanging around so much.

In my household, we happened to watch the Little Fugitive blu ray at around the same time we viewed Vincente Minnelli's extravagant adaptation of Madame Bovary from 1948. While a period MGM spectacular like that might not be the best example for comparison, it does stand as a good example of the kind of immaculate, somewhat sterile fare that audiences expected back then. In that context, the gritty reality of Little Fugitive must have seemed as alien as photographs of a lunar surface - and yet the approachability of its simple story allowed it to become a hit. Unpolished yet never amateurish, the filmmakers bring a spontaneity to each scene that still feels fresh, all these decades later. The photography background of Morris Engel and Ruth Orkin certainly helps. The couple's documentary-like aesthetic, borrowing not so much from Hollywood as from great New York-based artists like Berenice Abbott and Edward Steichen, turns Little Fugitive into an appealing, unique experience. 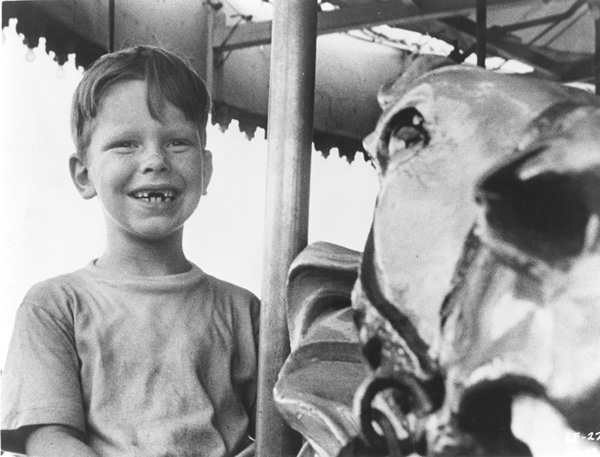 Kino Lorber, Inc. Note: image does not reflect the contents of the Little Fugitive blu ray.

Kino Lorber's blu ray edition of Little Fugitive is mastered from a 35mm print preserved by The Museum of Modern Art. Flecks, dust and other signs of age still periodically show up, but overall it's a handsomely mastered presentation that nicely showcases the film's grainy, naturally lit vistas. The disc's bonus content is not so well-preserved, but pleasing nonetheless.

The film's 2.0 Mono soundtrack is a pleasant, somewhat raggedy listen. Since the film's dialogue was dubbed in post-production, it has some issues with conflicting sound levels between ambient sounds and the actors' voices. Other than that, it's a consistent sounding track with only a few spots where the sound gets overly shrill.

Kino has carried over all of the bonus content on the Little Fugitive blu from their 2008 DVD edition. Two featurettes are included which delve into the lives of filmmakers Morris Engel and Ruth Orkin, lovingly directed by the couple's daughter, Mary Engel. Morris Engel: The Independent (2008; 28 minutes) and Ruth Orkin: Frames of Life (1995; 18 minutes) serve as concise overviews, dealing with Little Fugitive and their follow-up, 1956's Lovers and Lollipops. In addition to the film's Theatrical Trailer and a Photo Gallery of stills and promotional material, the disc contains an Audio Commentary with Morris Engel, recorded shortly before his 2005 death. The track is warmly delivered, nostalgic and informative in equal measure (although it strangely lacks much info on the film's mysterious third collaborator, Ray Ashley).

1953's charming, low-key, kid-friendly classic Little Fugitive might have a few faults (stilted, overdubbed dialogue), but its freshness and spontaneity makes it more re-watchable than other films of its vintage. Following a young boy as he spends a memorable afternoon, evening and morning at New York's Coney Island, this documentary-like tale accurately captures the yearning to escape to a completely new place, if only for a few hours. Highly Recommended.