"Perhaps there are invisible spaces..." 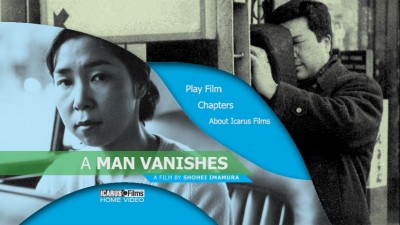 The 1967 documentary A Man Vanishes, made by revered Japanese director Shohei Imamura (The Insect Woman, The Pornographers) is perhaps as challenging for the audience as it is to the genre. What begins as a common missing persons story quickly turns into a mystery involving sisterly rivalry and dubious mysticism before exploding into queries about perceived truth and the artifice of film. As it ends, you will be left with little more explanation than what you began with and a ton more questions. How much of the preceding two hours was real, and how much was an expertly executed philosophical provocation?

The central story of A Man Vanishes is the search for a salesman named Oshima. He has been missing for nearly two years, having disappeared without a trace, leaving a worried fiancée (Yoshie Hayakawa, who is nicknamed "Mouse"), a baffled boss, and a family that wants answers, but only if they are convenient. They say to search for the lost individual might be to ignore his wishes and mess up whatever plan he has. Oshima is a small-town boy who left his family for Tokyo when he was young, and his parents still adhere to country ways. They have kept Oshima's disappearance a secret in their community lest his actions dishonor all of them.

The emphasis on Oshima's background is important, especially as the film shifts into a profile of other such young people living in the city. At one point, it looks as if Imamura is going to turn A Man Vanishes into a critique of modern Japanese life, but this minor detour is a feint, a kind of journalistic red herring, and one of many such dodges that emerge as the narrative develops. Oshima was always meant to be representative of a larger whole, a singular example of a phenomenon. Japanese citizens disappear every day, never to be heard from again. Where do they go? How do they remain unseen? As a symbol of the problem, however, Oshima is a bit troubling. The crew's investigation reveals that he had been busted for embezzling rather larger sums from his workplace. They also uncover a previous fiancée, and though she denies it, there are rumors that he impregnated her and had an abortion. Oshima is not all that he seemed, and the deeper the hunt goes, Yoshie realizes how little she knew him. The more that is exposed, the less urgent her search, and the less she appears to care for her would-be husband. 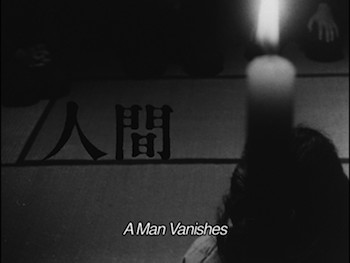 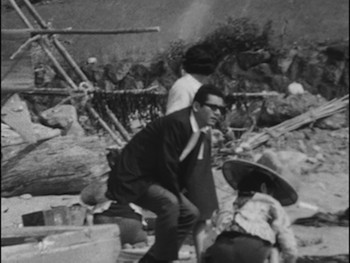 Taking hold midway is a narrative thread involving Yoshie and her older sister, Sayo. Stories about Oshima and Sayo begin to surface, regarding both his anger over her being a kept woman and also talk of a possible affair between them. Yoshie and the film crew find witnesses who claim to have seen then together. A psychic claims that Oshima is dead, and that Sayo poisoned him. Now Yoshie has reason to doubt not just her intended, but also her own sister. At the same time, outsiders are starting to wonder just what this "Mouse" really hopes to gain out of her public hunt for the missing man. Several decades before the 24-hour news cycle made such opportunism commonplace, people already had reason to doubt when someone went to the media as an outlet to explore and/or exploit personal tragedy.

Imamura and his team establish an avant-garde, verité style for A Man Vanishes. Interviews are often shot with "secret" cameras, peering around corners, just out of sight. There also appears to be multiple cameras at times, catching different angles--which could be an explanation for why the recorded audio so often doesn't match the conversation being observed. There is never a doubt that the speakers we are seeing are whom we are hearing, but why are the vocals so disconnected? Is cameraman Kenji Ishiguro capturing his images separately from the soundmen?

Possibly. Or it could be an intentionally disconcerting affectation. For as much as he is chasing a real story, Imamura is also purposely building a rickety house of cards, one that he eventually topples to reveal a film director's sleight of hand. This is not a trick a la Catfish, where the filmmaker intends to dupe us into accepting a false reality, but rather to make us question our own perception of that reality. As he tells the feuding sisters, their truths may differ, but to his way of thinking, they equal a single, greater truth, one that encompasses their willingness to be manipulated, to participate in a film where motives may be as false as the staging. By the director's estimation, A Man Vanishes is a fiction in how it is put together, but with enough of a relationship to facts that it is more accurate than a film that accepts everything at face value.

Arguably, the movie is over when Imamura lifts this lid, and he might have been better served by cutting to the end title right then. The sequence that follows goes on too long and doesn't add all that much more to the story. When one of the observers declares that the argument between Yoshie and Sayo is one without end, he echoes our frustration as a audience. I was yearning for Imamura to step off the sidelines and yell "cut." Sure, this underlines that the mystery of Oshima is ultimately one that has no solution, but it becomes a bit of a tedious overstatement before the final slate is called and A Man Vanishes wraps. 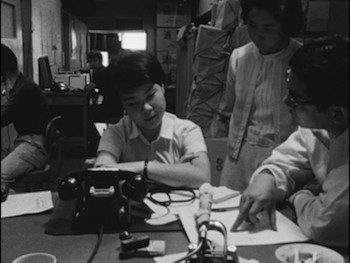 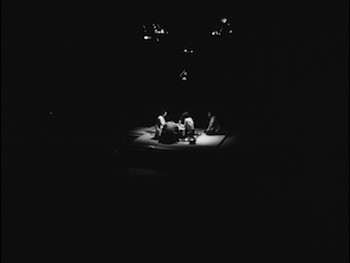 Video:
A Man Vanishes was shot in black-and-white and shown at a full-frame 4x3 aspect ratio. This restoration looks fantastic, with a clear picture and excellent resolution. Print damage is minimal, and the overall quality of the image is superb. The off-the-cuff photography holds up really well, giving us not just a well-produced motion picture, but a record of Japan in the 1960s--fashion, architecture, and everyday life in general.

The bonus films are all also full frame, though since they were shot for television in the 1970s, they are in full color. Resolution is somewhat softer, and colors are a bit muted, but it looks fairly normal for television programs of the time.

Sound:
The Japanese soundtrack is also well preserved, with clear tones and no indication of hiss, distortion, or dropouts. The subtitles are well written and paced to work with the explanatory title cards so that we can keep up without getting overwhelmed or lost.

Extras:
Icarus has packaged A Man Vanishes in a thick plastic case with trays for all four discs in the set, as well as a place for the accompanying 16-page booklet, which features credits and liner notes.

The reason for the extra packaging is that this set features five other Shohei Imamura documentaries as bonus features, spread across three separate discs. (A Man Vanishes is on its own DVD.) The first of these is a two-parter from 1971, In Search of the Unreturned Soldiers in Malaysia (50 minutes) and In Search of the Unreturned Soldiers in Thailand (45 minutes). In both films, Imamura travels to those countries looking for Japanese soldiers who remained behind at the end of World War II, with the goal of finding out why (the reasons vary) and to get their point of view on what became of post-War Japan. The Malaysia endeavor is mostly a fruitless search, ending in an extended interview with one soldier who converted to Islam and seeks peace and enlightenment. The Thai documentary is basically a long conversation with three men Imamura found. They share their pre-War history and detail what led them here. Both of these are self-contained, both in terms of their function as movies and how you engage with them. Judging by how the information came across to me, much of what is discussed will likely go over your head if you aren't extremely well versed in the workings of Japanese society. 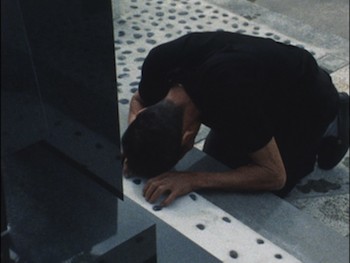 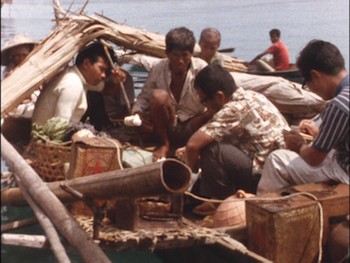 The subject of the exiled soldiers returns in 1973's Outlaw-Matsu Comes Home (47 minutes). In this program, Imamura follows one of the men he met n Thailand, Matsu, as he finally returns to Japan. Matsu was a soldier who stayed behind based on a crazy rumor that this was the army's orders, and they'd be back to pick him up thirteen years. During the documentary, he visits his remaining family (many of his relatives, including his mother, died when the atomic bomb was dropped on Nagasaki) and old friends/colleagues, and he discovers the truth behind how his death was erroneously reported. The film ends on a bitter, angry note, with much of the real drama unresolved.

The Pirates of Bubuan (46 minutes) is another travel piece. Released in 1972, it features Imamura visiting a small island in the Philippines and talking to the fisherman there. They are divided into two ethnic groups, split more by religion than they are race. The pirates of the title loom over their activities in a way that is, as it turns out, mythical. When the director finally tracks down the supposed head buccaneer, he finds a figure who is far from the romanticized image the name "pirate" conjures. 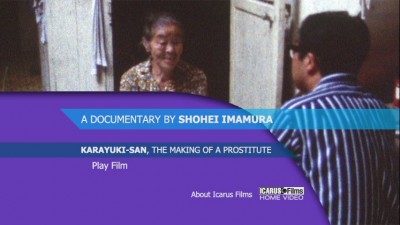 Karayuki-san, the Making of a Prostitute (75 minutes) is the last of the films, and it was released in 1975. (After it, Imamura would return to fiction-based filmmaking with Vengeance is Mine.) The term "karayuki-san" refers to Japanese women who were conned or kidnapped and sold into prostitution in the early part of the 20th Century. Imamura finds one surviving karayuki-san, Kikuyo, who was taken from Hiroshima and sent to Singapore just after WWI. She takes him through her journey, showing him where she worked, and he also talks to other people who might have known her or have some insight into the history behind her victimization, including those familiar with the time she spent in an Indian prison camp during the second World War. Imamura sees the women lost to this industry as another group abandoned by his country, particularly as tensions with China caused them to be further shunned. This point is driven home by visiting a pauper's graveyard where such women were buried, most of them with unmarked stones or, worse, wooden posts.

Throughout these films, themes of disenfranchisement and lost values emerge, as Imamura expresses disappointment in how Japan has developed following the tragedy of WWII. He sees all of his subjects as forgotten people, and the films serve as a way to bring them back from exile, both figuratively and, in Outlaw-Matsu's case, literally.

FINAL THOUGHTS:
Highly Recommended. An impressive package for an impressive movie. Icarus has pulled out all the stops for the first North American release of A Man Vanishes, taking the challenging 1967 documentary and putting it together with five more nonfiction films director Shohei Imamura made for television in the years following. All the movies form a thematic whole, of looking for folks who have been lost or disenfranchised in post-War Japan and asking why they have become separated from their fellow citizens. A Man Vanishes deserves the pole position, as it is certainly the best, turning an intriguing missing persons case into a critique of fame and the public's acceptance of conveniently framed, so-called truths. 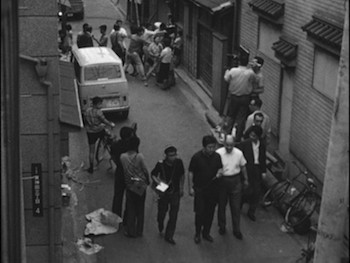 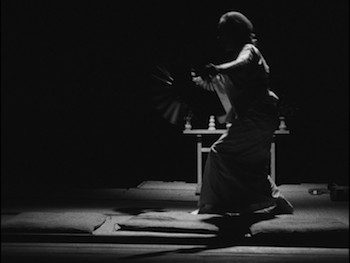