The history of burlesque via a pair of twirling tassels 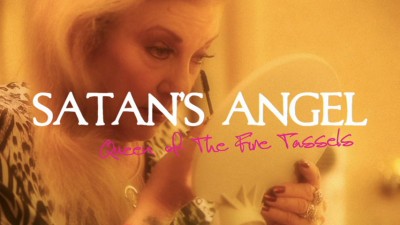 Dislikes: The general concept of burlesque

Hates: People who make good money and blow it

Documentaries with adult themes are often quite interesting, because the world of adult-entertainment is inaccessible to most of us, its citizens live by a very different set of rules and mores and, of course, where they live, there's often a good deal of nudity nearby. That's certainly the case with the story of Satan's Angel, a well-known burlesque performer who got her start in the '60s, and who continues to perform today in her 60s. It's a story of bad choices, rough living and a brassy broad who has taken on all comers from her days as a Catholic school girl to her role as a legend in exotic dancing. While the course of the tale is mostly one big cliche, there are enough unique elements to Satan's Angel to make her stand out from the crowd.

Told mainly through a number of interviews with the grand old dame, along with interviews with her wife and mother, as well as with some of her contemporaries and spiritual descendants, the story of Satan's Angel is undeniably interesting, as it spans decades and involves some crazy situations, famous celebrities and enough of a unique worldview to work despite the majority of the tale being relayed by one person. She's almost like a topless Forrest Gump. Of course, with one person's voice dominating the film, that means it relies a lot on how you feel about that one person. With Angel's take-no-guff personality, she can come off like a cranky old lady, which can be hard to stick with, but her blunt nature can also be refreshing, and her delivery fits perfectly with her gritty, Vegas-flavored background. However, when her story requires empathy, it can be hard to dredge much up. 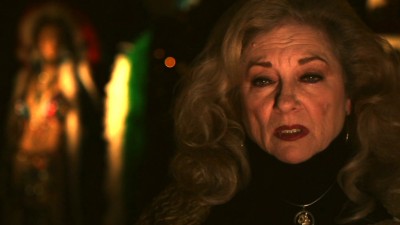 While the story of Angel's climb as a dancer, her inevitable decline and her return from retirement, riding a wave of retro nostalgia, is a big enough story for a feature documentary, especially with the influence she's had on a generation of younger dancers who look up to her, but the director worked in her status as a lesbian as a relatively major plot point (which a cynic might argue created an opportunity for more festival pick-ups.) Though there's obvious bravery displayed, as she was known to be gay in a time that was far less tolerant, and suffered for it, this storyline isn't integrated well with the overall film. Considering that she dated men as well at this time, and married men several times, the situation feels a bit confusing (which may just be the whole point.) In the end, combining her struggles with how her sexuality was accepted and this older woman's decline resulting in her gyrating on-stage as a senior citizen is actually rather depressing, whether it's allowed her tp find a new fanbase or not.


Angel may be entertaining, but overall, the film is more interesting when it (and she) talks about the history of burlesque, or when Angel discusses her more lurid tales, like her descriptions of famous lovers. The wealth of archival footage and imagery is reason enough to check out the film (though it's also reason enough to curse the progress of time (and self-abuse), as the young Angel is incredibly gorgeous.) And obviously, if you enjoy burlesque, there's a large amount of it on display in this film, including lots of the more natural-looking women who worked the circuit back in the day. Thankfully, the film doesn't hold out when it comes to Angel's signature trick, the fire tassels, capturing this oddly captivating routine. That's probably a fitting way to describe the whole thing: oddly captivating. 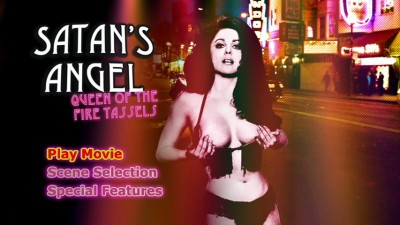 The film arrives on a single DVD, which is packed in a standard keepcase. The disc features a mildly animated, anamorphic widescreen menu with options to play the film, select scenes and check out the extras. There are no audio options, but subtitles are available in English.

If you plopped this film down in front of me with no explanation, I don't think I'd be able to guess the budget of this film, as everything looks great, with a crisp, clean image that boasts quality color and a nice level of fine detail, with no issues with compression artifacts. Even the old images and footage looks good, despite the effects of time.

Delivered via a Dolby Digital 2.0 track, the audio here is appropriate for a documentary, with a center-balanced presentation that keeps everything sounding good, which is all you really want from a documentary (especially a low-budget one.) No one's dialogue is problematic, and the excellent soundtrack, which is loaded with era-appropriate surf rock and lounge music, comes across strong. The soundtrack may be the single strongest element of the film, so this presentation is no disappointment.

The extras kick off with an episode of the video podcast "How We Make Movies," (15:46) featuring creators Josh Dragotta and Tony Marsico. It feels a bit college-television-ish, but it offers some background on the filmmakers and the film itself, as well as some discussion on the art of documentary film and funding an independent film. It's followed by a piece about the film's premiere at the Scottsdale International Film Festival (6:38), with an interview with the two creators and Angel, as they talk about the film's reception at various festivals.

The rest of the extras about the movie is made up of deleted footage, starting with "What's in a Name?" (1:12), where she relates the story of how she came up with her stage name, "The Hummingbirds," (2:47) a story about her role in a topless band, and "Steve," (2:03) a recounting of her encounter with a Hollywood legend and how it got her into a movie (sort of.)

The film was completed with the assistance of a Kickstarter campaign, which let fans support the film financially. The DVD includes several elements from the campaign, like six "quick tease" clips (3:57 in all) which were released to pump up pledges, along with three promotional videos for the campaign, one for the project (with the trailer) (3:29), and two focusing on the poster (2:18) and soundtrack (1:19). The poster featurette is the most engaging, as you get to watch printmaker Mike Hamel handmake the poster prints, though the annoying chirp in the audio at the beginning threatens to drive you away.

Also included are a pair of trailers for the film, one a general one and one focusing on her status as a legend of burlesque, as well as some other Breaking Glass releases. 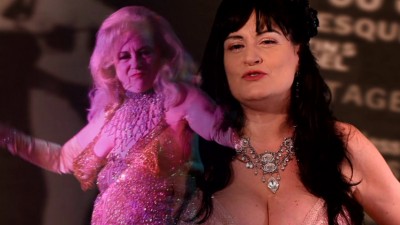 Though dancer Satan's Angel is ostensibly the focus of this documentary, the real star is the world of burlesque and its history, and that's where it succeeds most. But your enjoyment will ride mainly on how you take to the old broad in the title, which can be a challenge. The movie looks and sounds solid though, and offers a good selection of bonus content, so if you do give Satan's Angel's story a look, there's enough reward.