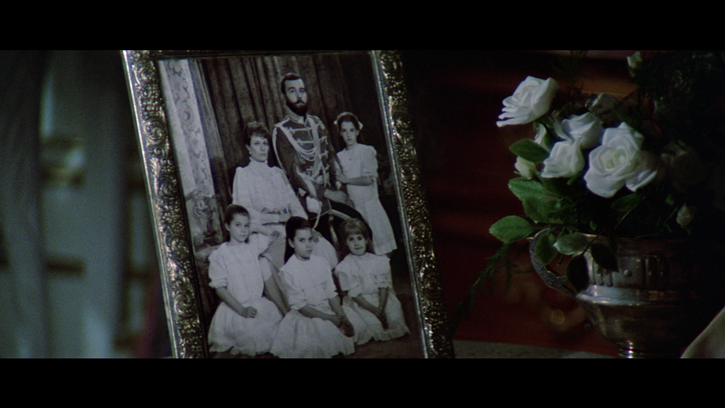 Nicholas and Alexandra is an ambitious, sprawling, and well-meaning motion picture about the remaining members of the Romanov family dynasty in Russia. The characters are in the thrust surrounding revolution and changes to Russian government. Directed by Franklin J. Schaffner and produced by Sam Spiegel, this is an expansive and determined motion-picture from 1971.

Yet Tsar leader Nicholas (Michael Jayston) and his wife Alexandra (Janet Suzman) hardly pay any attention to these dramatic shifts in the times of their country, and they are both far more concerned with caring for their sick son, who was born with an illness that caused exorbitant grief for their family. Along with their several daughters they live a family life that seems to some extents ordinary. However, they fail to recognize the country's needs and they live out lives of great wealth and royalty. Following revolts that occurred from Russia's starving and suffering people, millions of Russians died in a great tragedy, and the course of the story has become more complex in significant ways; affecting all of Russia along with the Tsar family.

This isn't a perfectly structured film that excels on every level of filmmaking. I found there to be a lot of good effort involved in the production anyway.  This isn't really average as a film. Not by any means is this merely "average" on technical merits. But does it excel to the heights it hopes to achieve? That really stands as a far more intriguing question regarding the success found within Nicholas and Alexandra.

The direction of the film by Franklin J. Schaffner (Planet of the Apes, Patton) is actually quite good in some respects. The film has many interesting moments visually and it sometimes has performances that are also quite interesting and worthwhile. These are definite marks of good direction and should by all means be positive qualities acknowledge about the film's direction. 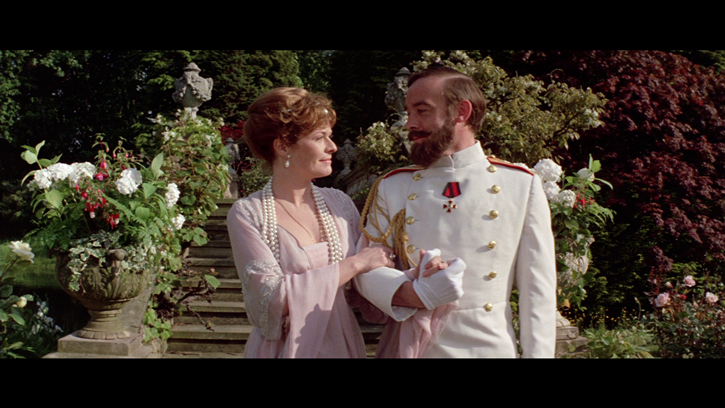 However, the film doesn't hit a perfect stride at any point during the entire story. This is both Schaffner's fault as director and the fault of the screenwriter James Goldman, who adapted Nicholas and Alexandra from the novel written by Robert K. Massie but forgot to make characters that people in the audience could feel invested in more.

None of the characters feel well developed. This is particularly problematic for the script as everything is dealing with real events and people and none of them seems particularly well portrayed. This is also dampened even further by weak pacing. Sometimes the film feels as unbelievably flat and uninvolving as one can imagine. At other times, it's quite good and is interesting to behold. It's all over the map.

Schaffner also plays around with having entire sequences filmed and acted out as believable and fairly "ordinary" scenes in which characters talk and interact with one another, before he lunges forward into a more dream-like mystique that seems intended to add a certain flavor to the film. These moments seem like attempts to make it more experimental and artistic. Yet it doesn't all work out that well. It just seems odd to me how many sequences were handled like this and it doesn't really do the film any favors in its stylistic approach.

There is one element that really dampened the film's overall quality and it was inherent in both script and direction: this is a film that is undermined somewhat by its own obvious ambitions. This rarely happens to a film (though sometimes it does), and here is a good example of that. Producer Sam Spiegel (Lawrence of Arabia, On the Waterfront) wanted this to be a massive success and wanted big name actors and big, well, everything. 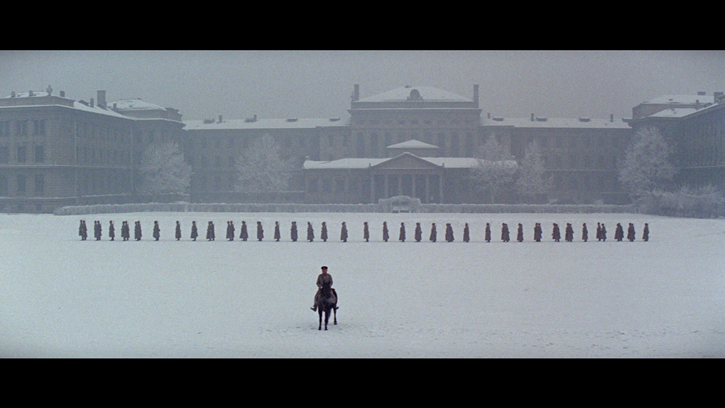 Yet the film is constantly an undermined production because of these elements.  It just doesn't match the ambition found displayed everywhere else. For every artistic moment of brilliance from the direction, acting, a costume, or make-up moment of artistry there's another element working unfavorably for the film's success. The production seems to be overblown and has unfortunately failed to grasp a clear sense of unity through all artistic areas.

It's odd to see a film where everyone involved seems to be determined to make a masterpiece - an ambitious effort that wants to succeed on every level. That may be the biggest problem of them all. Most of the movies that I would describe as masterpiece material are masterpieces because the filmmakers succeeded in telling a great story exceedingly well. Not because something about the story they were telling seemed appropriate for the label of being a masterpiece by some suggestion of name or ambition inherent.

Yet that's exactly what sometimes seems to be the point of this as a production. It feels designed to win big, overwhelming, and triumphant amounts of Academy Awards.  It doesn't feel as if it designed to tell the audiences a story crafted with precision filmmaking. It feels like something made for awards potential, and I rarely ever feel that way about sweepingly epic productions.

I appreciate the artistic merits of Nicholas and Alexandra as a production. It is genuinely good in many regards and it is worth the recognition for its costumes and production designs and all of that other fine jazz that helped with the quality of the sets and other backdrop elements. It's really just too bad that the film doesn't work out as perfectly as the filmmakers envisioned. Nicholas and Alexandra is sometimes just an over-the-top dramatic period piece but it's a worthwhile trip into an interesting passage in Russia's history nonetheless. 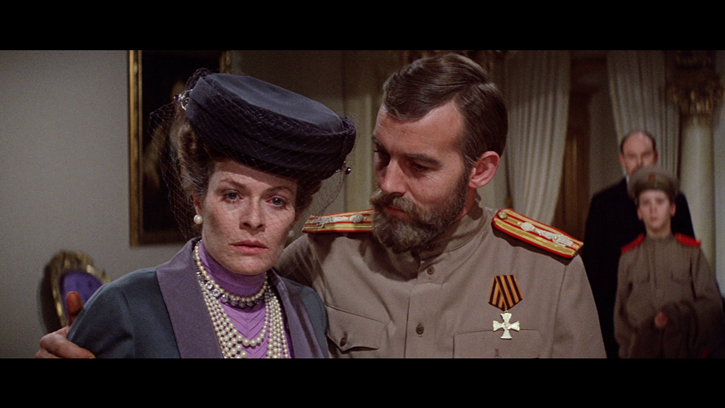 Nicholas and Alexandra at last arrives on Blu-ray with a 1080p High Definition transfer which preserves the 2.35:1 aspect ratio of the original theatrical exhibition, as intended by director Franklin J. Schaffner and director of photography Freddie Young. Fans of the film will undoubtedly find themselves feeling pleased with the presentation quality.

This is a well preserved presentation. The film has never looked better than it does on this quality High Definition release. The transfer retains a reasonable amount of film grain, has good depth throughout the entire course, and color reproduction is reasonably strong. The transfer doesn't have the sorts of annoyances sometimes found on classic films: specks of dirt or damage and other big problematic possibilities aren't found here. The overall image is crisp and smooth. There is some minor softness, but it's something that seems to be the result of the source material. I have little doubt that longtime fans will find this release to contain a worthy presentation in regards to the film's transfer.

The 1.0 DTS-HD Master Audio is not even remotely close to being as good as the film's video quality presentation and it's nothing that really ever impresses. Unlike the rather stunning HD transfer, the audio lacks a sense of real "punch" and flavor and feels rather dated. This is the result of an underwhelming audio source that was surely used for the original elements.

Everything sounded slightly muffled to me. The dialogue is understandable enough to follow but it is rather soft and the volume levels I use were actually disagreeable with this presentation and had to be raised significantly. This isn't just because of it being a mono presentation, either. It's certainly not that aspect. I just reviewed Easter Parade (which had a magnificent sounding 1.0 lossless audio track) and the comparison in quality seems rather drastic. The audio disappoints with an average lossless presentation with only some minor added depth, clarity, and jubilance when it comes to the score. Nicholas and Alexandrasounds altogether dated. Don't expect a great presentation in the audio department on this release. 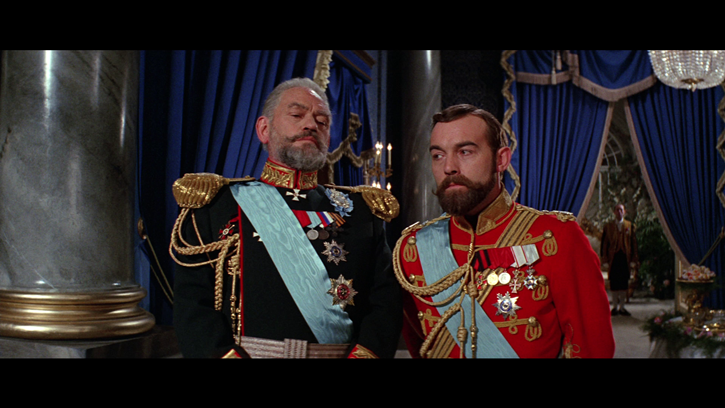 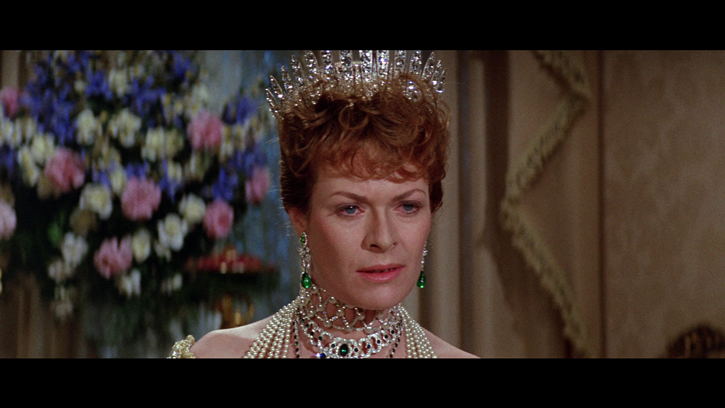 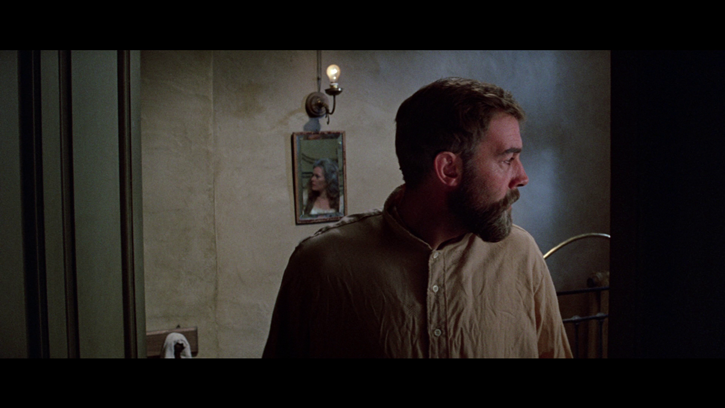 The main supplement is an Isolated Score Track containing the music of composer Richard Rodney Bennett. This receives a lossless DTS-HD Master Audio 2.0 presentation. This was certainly an acclaimed score at the time of the film's release, and it earned the composer an Academy Award nomination. Fans of the score will enjoy this supplement.

There is also a printed essay written by Twilight Time's Julie Kirgo. She writes extensive notes about the film's behind the scenes production aspects and it makes for an interesting and quite worthwhile read for anyone interested in the film and its creation.

Video Supplements are included in1080p High Definition, but they are clearly dated and are not as stellar as some may hope to discover. Still, the effort to include these vintage featurettes in HD at all is something worth appreciating.

Royal Daughters (8 min.) focuses on the actresses who portrayed the young Tsar's daughters.

Changing Faces (7 min.) takes a look behind-the-scenes at the use of makeup on the film with transforming the actors into their respective roles.

The Royal Touch (6 min.) is about the Academy Award winning costumes used on the film. 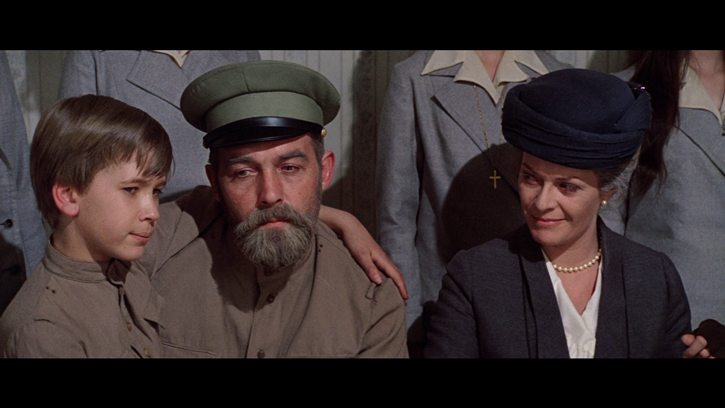 Nicholas and Alexandra offers a bag of decidedly mixed results. On the one hand, you have an entirely lush and impressive scope in design with expansive sets, costumes, makeup, and more technical success at every corner of the film and elaborate efforts. Conversely, the film's really lacking characters that are easy to connect to. Despite the historical backdrop being significant there isn't as much time spent trying to develop characters to make audiences care about them and the film suffers because of that element. This is a historically interesting motion-picture a viewer will be able to recognize as an ambitious and worthy effort but it doesn't meet its own established sense of potential.

Longtime fans of Nicholas and Alexandra should be pleased with the Blu-ray presentation even despite some disappointment found with the audio. For that audience, this release is a worthy purchase. The video presentation and amount of extra supplemental material included is notable. As for everyone else, it's worth seeking out for history buffs hoping to see some extra artistic flair and creativity but most audience members should probably rent the film first and decide about a purchase from there.