While I've always associated John Cusack mainly with comedies, including the absolutely hilarious Better Off Dead, he's done well in many more serious roles as well although somehow not many of them have stuck with me. In The Numbers Station, he plays Emerson Kent, a CIA black ops agent who has been increasingly bothered with issues of the morality of his job. He reaches a breaking point when on a mission he is first forced to kill a man at his home as his daughter watches, and his partner then kills the daughter in the name of "no loose ends" after Emerson refuses to do so. After this episode, his superiors feel that a less stressful position is in his best interest, and is transferred to the town of Suffolk in England to guard the film's title location- a numbers station set up in a defunct US Army base that "officially doesn't exist." Text at the beginning of the movie explains just what a "numbers station" is: a top-secret location from where a person reads numbers over a shortwave radio frequency. While anyone tuning in hears only a voice reciting digits, to CIA field agents these are code for their assignment instructions. The meaning of the numbers changes so many times that it's supposedly impossible for anyone else to decipher them, and it's also hard for anyone to trace where the broadcasts are coming from. The intro also states that governments deny "numbers stations" actually exist but nevertheless they can be heard on shortwave radios. (I haven't listened to one myself in a long time, but have heard such readings of numbers before in various languages.) 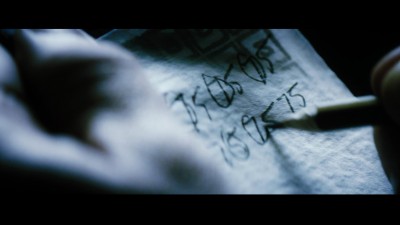 Katherine (Malin Akerman) has the task of announcing the numbers on-air from a sealed area within the base, Emerson just has to guard her and the location. The setup consists of one additional operator and guard, with each team staying at the station for three days at a time until the other takes over, when the departing guard then drives the operator to the train station, picking her up and taking her back three days later. The movie's conflict arises when Emerson and Katherine arrive and the other team isn't out front ready to leave as they usually are, and are then shot at when getting out of the car. They make it inside but other intruders are waiting for them there as well. They must then figure out how and why this breach of security happened, and also plan their escape.

The Numbers Station runs a bit under 90 minutes, which is just enough for it to be effective without dragging things out. The majority of it takes place within the army base with Katherine and Emerson uncovering clues. At one point they find some audio surveillance recordings on a computer (there are cameras also, but they were taken out by the intruders), and as they listen to them the movie flashes back to these scenes between the other team and the intruders playing out. Other clues are discovered on the computers as well (accompanied by the movie clichÃ© of fast typing and sounds whenever something important pops up on the screen). The film maintains an atmosphere that gives the viewer the feeling of being closed-in, with most scenes darkly lit and accompanied by a tense, bass-heavy score by Paul Leonard-Morgan. There are plenty of twists and surprises along the way which any further discussion would spoil. 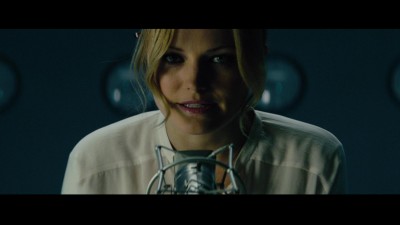 The AVC-encoded image is presented in a 2.35 ratio, and I was very surprised to find that The Numbers Station was shot using a digital format as the picture has several film-like attributes including grain in the darkest shots and some flaring inherent in anamorphic film. Admittedly I still don't know a lot about digital movie photography- while I've thought before that it didn't quite match the look of film, this was close enough to fool me. As I mentioned, most of this movie takes place in very dark settings but they're lighted just right to show the needed details while retaining the atmosphere.

Audio is in 5.1 DTS-HD Master Audio, with the surrounds used sparingly but effectively, most notably in scenes with gunshots. The tense music score seems to extend into the LFE channel which greatly enhances the mood of the film.

Subtitles are included in English SDH format as well as Spanish.

A 15-minute making-of feature is included, which consists mainly of insight from producer Sean Furst along with John Cusack and Malin Akerman, with mostly the usual re-hashing of the story and characters although it gives you a bit of a sense of what the filmmakers' intentions were as well as more explanation of the CIA communication portrayed.

The disc opens with hi-def trailers for The Tax Man, Day of the Falcon and The Double. 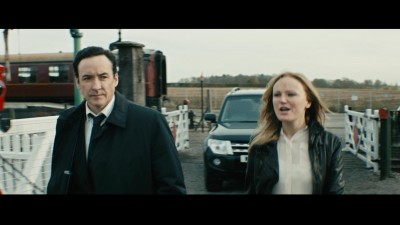 Although The Numbers Station is a bit- dare I say it- by the numbers, it's nevertheless an engaging and suspenseful thriller. John Cusack's performance makes you care about his character and the situations, and the photography and music score set just the right atmosphere, and again is a good display of how digital technology can mimic the look of film.