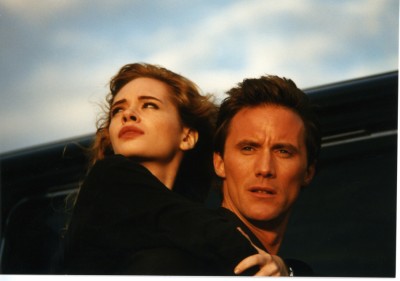 Of all that the revival/re-release DVD/Blu-ray imprint Olive Films has given cinephiles to be ecstatically grateful for, its systematic, ongoing reissue, in carefully preserved and cleaned-up new editions, of the works of maverick American independent-film director Hal Hartley is among the most pleasant surprises. The latest Hartley arrival from Olive (after 1990's Trust and 1995's Flirt appeared earlier this year) is his debut feature, 1989's The Unbelievable Truth. As it turns out, the out-of-chronological-order scheduling of these releases doesn't make so much of a difference to those of us interested in charting the Hartley's artistic development over his filmography: As the opening salvo in an instantly recognizable series of stark, sharp, deadpan, but unexpectedly un-ironic pictures about intellectual misfits in trouble struggling to maintain their dignity, integrity, and sense of romance in an aggressively mundane world, it bears no trace of faltering or uncertainty, nor does it have the remarkable but still-hesitant voice one often sees a the first features of the period (compare the very intriguingly inflected but relatively safe genre-templated debuts of Paul Thomas Anderson (Hard Eight), Wes Anderson (Bottle Rocket), or even Quentin Tarantino (Reservoir Dogs) with the full-throatedness of the sophomore efforts -- Boogie Nights, Rushmore, and Pulp Fiction, respectively). The Unbelievable Truth is as accomplished, distinctive, and poised as the spate of films that followed it, possessed of a cinematic style and complementary thematic preoccupations already fully formed and surefooted right from the outset. 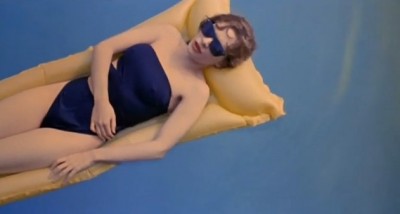 In this iteration of Hartley's recurrent mythology (which reached its apotheosis in 1997's Henry Fool) of the prodigal, cerebral, and morally/philosophically preoccupied son ambivalently returning to his roots in that gray zone where the lower-middle and working class experiences blur together, it's the lankily handsome Josh (Robert John Burke, Gossip Girl) -- a mechanic dressed in black who's mistaken for a priest by the drivers from whom, when we first see him between the opening-credit title cards, he's thumbing rides back home to Long Island -- who's tumbling around with a well-set moral compass but no sure place to land. It's Josh's tangled past, which has seen him convicted of murder and sentenced to a long prison stretch from which he's just now reemerging, that contains the unbelievable truth of the title (like they always say, it's stranger than fiction), obscured by the many rumors, guesses, and exaggerations spread him that surface as he tries to reintegrate himself into the community. Josh's also-black-clad opposite number is Audry (the late Adrienne Shelly), a high-school senior too young to remember Josh's local infamy, who's lately found herself at loggerheads with both her hard-headed, small-minded small-businessman pop (Christopher Cooke, in a cantankerously memorable gem of a comic performance) and her aspiring-yuppie, testosterone-addled ex-boyfriend (Gary Sauer) because she's been blowing off class, plans for college, and any sex life in favor of reading about and obsessing over the likelihood of a nuclear holocaust. Audry and Josh are kindred, free, curious spirits, drawn to one another, but so much stands in their way: a lucrative but cynical modeling career Audry falls into; the steadfast belief in "deals" and money propagated by her father; the past that Josh can't quite seem to live down; and the quotidian, materialistic, "practical" values that saturate the world around them, fogging and dampening their inquisitive, romantic, wise but "naÃ¯ve" natures. 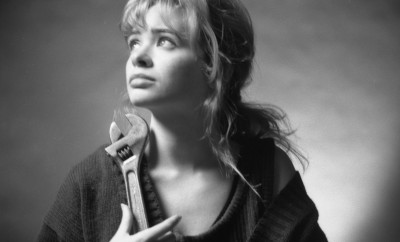 It's an almost too complicated story, also involving a whole menagerie of colorful supporting characters (a down-and-outer played by In the Company of Men's Matt Malloy; Edie Falco (The Sopranos) as a hyper-realist, bluntly critical waitress; and Julia McNeal as the woman whose secrets include the unbelievable truth that will set Audry and Josh free if she can bring herself to disclose it). But Hartley's approach, as usual, gives everything an air of elegant, matter-of-fact simplicity, if hardly "naturalness"; this director's signature style -- visually, sonically, dramatically, and performatively -- is anti-naturalistic, the actors encouraged to line-read rather than emote and, whether static or in movement, usually set against one another and their environments as if choreographed or posed, tableaux vivants created through foregrounding shallow-focus compositions or symmetric, geometrically-patterned Godardian ones for a near-Pop-Art look and feel that, along with intertitles that read "meanwhile" or "but then" and the film's measured, razor-precise editing rhythms (provided by Hartley himself, and boosted by accompanying, sometimes quick-syncopated and sometimes liltingly melancholy synthesized musical themes by composer Jim Coleman) give the whole affair the feel of a minimalist comic strip -- swift, artificial, distanced, and frequently very, very funny. 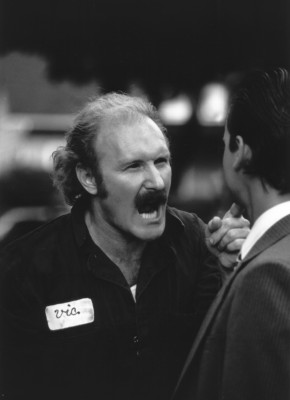 But none of it is the least bit ironic or parodic; the distancing, intentional stiffness and near-archetypal quality of the characters and interactions is meant to lay bare something essential, "universal" even, in their longings and foibles and real passions and blind spots. Hartley's cool, detached style lets his scenario easily switch gears, calmly yet to great juxtapositional effect, between zippy, near-nonsensical, rapid-fire screwball patter; arch, read-aloud and quote-heavy musing and philosophizing; and what comes in this context to seem a truly guileless, plainspoken emotion. The emergence, seemingly in spite of itself, of that pure feeling packs an almost disconcerting resonance given the anti-expressive restraint imposed by the filmmaker that shapes and informs every frame of The Unbelievable Truth's world, like some comically crystallized and boldfaced version of our own. Hartley's style is stringent, no doubt, but refreshingly so, in ingeniously counterintuitive aid of some surprisingly classical narrative virtues: we laugh, we're moved, we're intensely interested in these troubled, out-of-place people and want them to find what they're looking for. Smart but never smart-assed, clever but never merely so, The Unbelievable Truth, like all of Hal Hartley's best work, is the clearest illustration one could hope for of the difference, in cinema and other representative arts, between the merely slavishly "realistic" and what gets, no matter through what channels, to something that's real. It never wears its heart on its sleeve, but the film's full-blooded beat lets us be certain that it's there, and its artifice, which seems so extreme at first as to be jarring, reveals itself in the end as just Hartley's well-chosen aesthetic path to a deeper kind of truth. 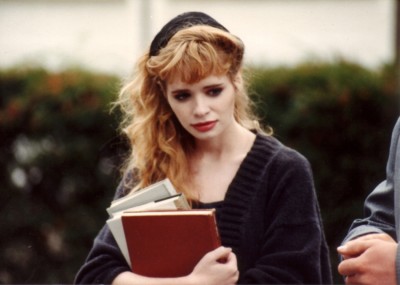 
The film's transfer -- an AVC/MPEG-4, 1080-mastered presentation at the widescreen aspect ratio of 1.78:1 -- is very nice. The cool but bright lighting and colors of Michael Spiller's cinematography retain all solidity, detail, and variegation, while the film's actually filmic, celluloid-like texture is left unsullied by too much digital noise reduction (DNR). It's a very fine-looking and respectful translation of film to digital that maximizes our viewing pleasure.


The film's original stereo mix comes to us fully intact as a DTS-HD Master Audio 1.0 track on which every sound is resonant, clear, deep, and multifaceted, from the dialogue to Jim Coleman's character-defining (and character-unto-itself) music. It all sounds absolutely faithful and gorgeous, with not a trace of imbalance, distortion, or any other flaw.


--Opera No. 1 (1994, 8 min.), a delightful, entirely musical pastiche that beautifully blends Hartley's high-culture familiarity (and side-outlet as a working composer/musician) and love of the grimy modern workaday and slapstick. The plot involves a bookish young man (James Urbaniak, later star of Henry Fool), a harried bicycle courier (Patricia Dunnock)and two roller blade-wearing fairies (Hartley regulars Adrienne Shelly and Parker Posey) who look on from a loft above and attempt to intervene and bring the oblivious, defensive, and self-involved pair together in love, leading to misunderstandings almost as tenderly hilarious as the film's very incongruous but wonderfully comic combination of beautiful, actually sincerely operatic music/voice (sung by real opera singers and lip-synced by the actors) and very contemporary-New-York, often bluntly literal lyrics.

--The Unbelievable Truth and Its Consequences (2010, 18 min.), a documentary on the making of The Unbelievable Truth that doubles as a fairly thorough thumbnail retrospective of Hartley's entire filmography and career (some snippets here are also used in a similar supplement on the recently released Blu-ray of Trust). Featuring circa-2005 interviews about working with Hartley with this film's stars, Robert Burke and Adrienne Shelly, along with future Hartley principal cast members Parker Posey, Thomas Jay Ryan, and Jeff Goldblum (who co-starred in 2006's Fay Grim). 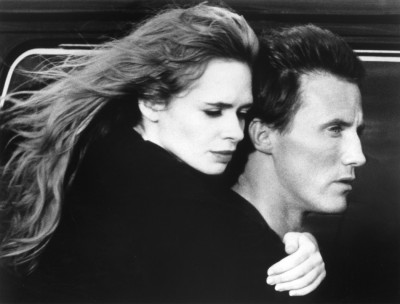 The Unbelievable Truth may be American-indie wunderkind Hal Hartley's debut feature, but it stands as a remarkably strong, nearly fully-formed introduction to his aesthetic, which remains fresh and distinctive as the film nears its 25th anniversary, and must have seemed like a revelation and an inspiration when it was first released back in 1989. As it spins its tale, in delightfully eccentric fits and starts, of the usual Hartley genius/malcontents/secret romantics (Robert Burke as a priestly mechanic whose past holds the unbelievable truth of the title; Hartley discovery Adrienne Shelly as a precocious, nuclear-holocaust-obsessed teen), the perhaps initially off-putting, ultra-deadpan flavor that permeates its style, pace, and performances seduces us, gradually revealing its tart addictiveness. As we do with the actors' characterizations, which Hartley, like his incongruous, almost never comedic filmmaker-hero Robert Bresson (A Man Escaped), severely discourages from any kind of "expressiveness," we intuit more than see the film's heart, which beats a very funny, then suddenly touching, rhythm made up of clipped, staccato screwball cadences/line readings and "unrealistic" but very real epiphanies, realizations, and ethical, philosophical, and emotional movements that play out within and among Hartley's gallery of tough yet tender characters. The Unbelievable Truth marked the arrival of what is still perhaps the most unique voice from the American indie-cinema boom of the '90s, and it's a film whose considerable, eccentrically distinguished virtues stands up more than well enough to leave it both ripe for rediscovery and worthy of a permanent spot in most serious collectors' Blu-ray libraries. Highly Recommended.