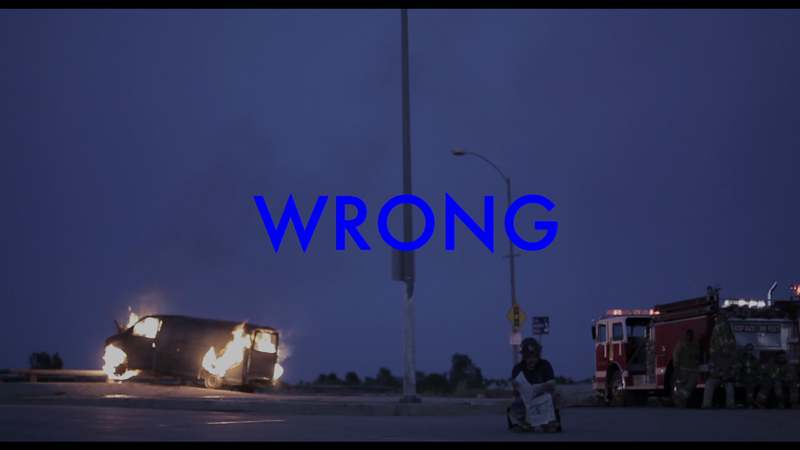 
The Movie
Quentin Dupieux's 2010 English-language debut Rubber is a striking film, telling the story of a homicidal tire with psychic powers, on a killing spree, as an audience watches from a "safe" distance. If that description doesn't make it clear, it's an unusual film, a neat example of just where Dupieux' coming from as a surreal artist unbound by the traditional "rules" of filmmaking. For anyone who enjoyed it (which is decidedly not a wide swath of mainstream audiences) the idea of Dupieux making another film was a very exciting prospect. Even if the story is a simple one: a man loses his dog.

Of course, in Dupieux' hands, a simple story does not end up so simple, as Dolph (Jack Plotnick) ends up in a swirl of surreal activity as he tries to find Paul, his beloved canine companion. It may seem like a bit of a reviewer cop-out, but revealing much about what goes on in this movie is bound to ruin it, as the surprise of what the movie reveals about Dolph's world is a big part of the perverse joy the film imparts on the viewer. That said, there's a plot behind Paul's disappearance, involving a seemingly omnipresent guru, and a bizarre romantic subplot involving pizza, fertility and gardening. To be completely honest though, the plot is almost secondary to the experience. 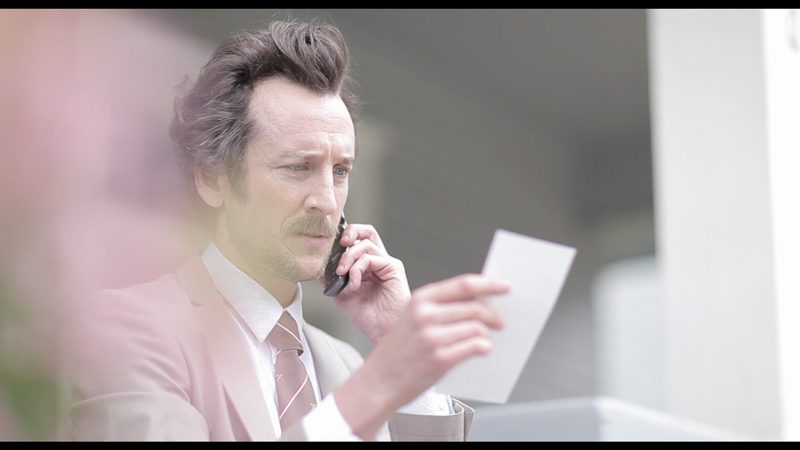 Much of what happens in Wrong is meaningless, or at the very least, the meaning is so obtuse or buried that it will require a team of film scholars or obsessive bloggers to crack, especially when it comes to Dolph's neighbor, who is on a quest of his own that literally takes him to the ends of the Earth, and whose presence in the film would be considered wholly unnecessary in another movie. You're asked to overcome some severe suspension of disbelief in order to make it to the finish line, including giving up on the idea that what you're seeing is actually happening in the film's reality, but if you give yourself over, the feats of oddity add up to an entertainingly surreal run of events, that manages to maintain the thread of the story and even completes the tale in a satisfying manner.

For as weird as the movie can be, and it gets so weird that the memories of dog excrement becomes a plot point, there's actually some rather conventional comedy in here, and it even has what can be considered a traditional moral. Many viewers will find it hard to enjoy, and some might actually get angry about the confusion it can impart, but it's actually a cohesive film that happens to be dripping in absurdity. It's also a gorgeous film, as Dupieux is an artist in every sense of the word. Dolph's world is detailed, bright and clean, almost sitcom-like, which offers a perfect contrast to the oddness it holds. The cast is just as impressive, especially Plotnick as our hero and Alexis Dziena as a impetuous woman who works her way into his life. as they don't give in to the weirdness, and keep the film grounded. 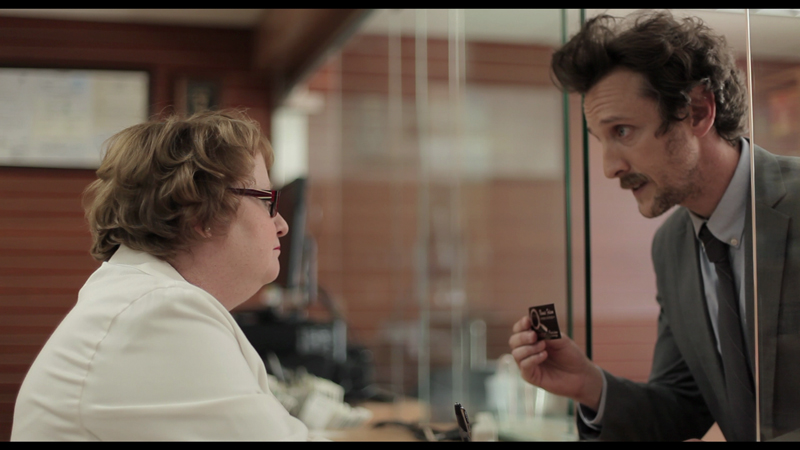 The Disc
A one-disc release, this film arrives on a single Blu-ray Disc in a clear Blu-ray keepcase with a digital-copy code (designed to match a prop in the film) and a 20-page booklet (also designed to mimic a key item from the film. It also has a reversible cover, which gives you a choice of the colorful illustration most know or beautifully simple black and white artwork. The disc has an interestingly odd animated menu with options to watch the film, select scenes, adjust languages and check out the extras. Audio options include English DTS-HD Master Audio 5.1 and Dolby Digital 2.0, while subtitles are available in English and English SDH.

The Quality
The AVC-encoded, 1080p transfer here is impressively clean, presenting Dupieux' gorgeously designed vision crisply with a high level of fine detail, while all of the bright, vivid colors are reproduced perfectly, and appropriate black levels. Nothing is noticeably off about the image, with no concerns about digital artifacts in the presentation. Considering the heights of detail that are obvious in Dupieux' artistry, this transfer does the job right.

The DTS-HD Master Audio 5.1 track doesn't have a tremendous deal of work to do in presenting the film's audio, making its biggest impact with Dupieux' eletronic score and some important sound effects, as the mix doesn't feature a lot of directional effects or dynamic mixing. The dialogue is clean and clear throughout though, and there are no issues with distortion.

The Extras
The first extra is the 12:17 "Phase 7: The Making of a Nonfilm" which is an entertaining look behind the scenes of Wrong. The participation of Dupieux and producer Gregory Bernard, as well as many of the cast members, is what makes this such an interesting look at the making of the movie as well as Dupieux' process. It's followed by an oddball featurette "The Wrong â€˜Behind the Scenes'" (17:56) which features VHS-quality video of many of the cast members reading selected moments from the script, normally lines they themselves did not perform. It's just the kind of thing that's right up Dupieux' alley, though it might take the joke a bit too far. Even so, it's worth watching to the end.

Also included is "Memories of a Dog Turd" (3:37) which is the full video that plays in a key part of the movie, though this time it has a nice techno soundtrack. The title really says it all.

In addition to some trailers, as mentioned before, there's a code for a digital copy of the film, as well as a booklet that includes some of the content of the book in the movie, along with an all-too-appropriate introduction by Eric Wareheim (of Tim & Eric Awesome Show, Great Job!) along with interviews with Dupieux and Bernard. It's a handy bit of insight into the movie for anyone lost when the credits roll. 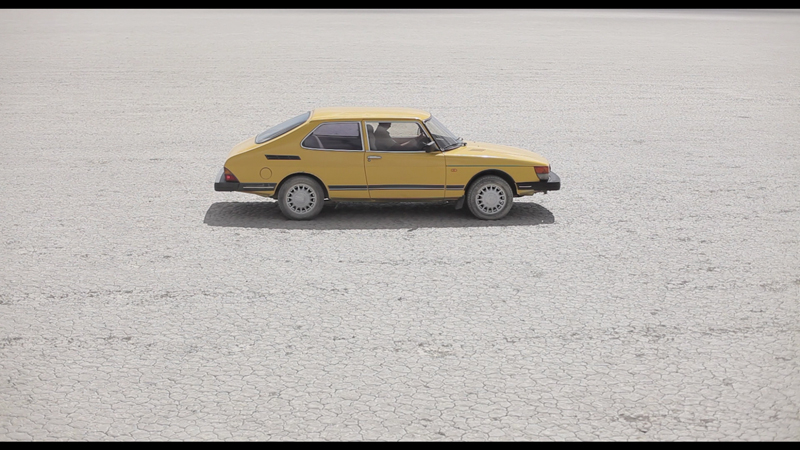 The Bottom Line
If you enjoyed Rubber, you obviously want to check out Wrong, as it's a continuation of the same sense of the absurd Dupieux seemingly revels in. That said, if Rubber didn't do it for you, but you appreciated its post-modern touches, you should give Wrong a shot, as it's a more accessible film but with all the same strange accoutrements. The presentation is great, right down to the menu and packaging, and there are some interesting extras to check out, making it well worth checking out if you can deal with having your mind twisted a bit. If it wasn't so divisive, it would easily be worth a highly-recommended rating, but the audience for this movie is a bit limited.