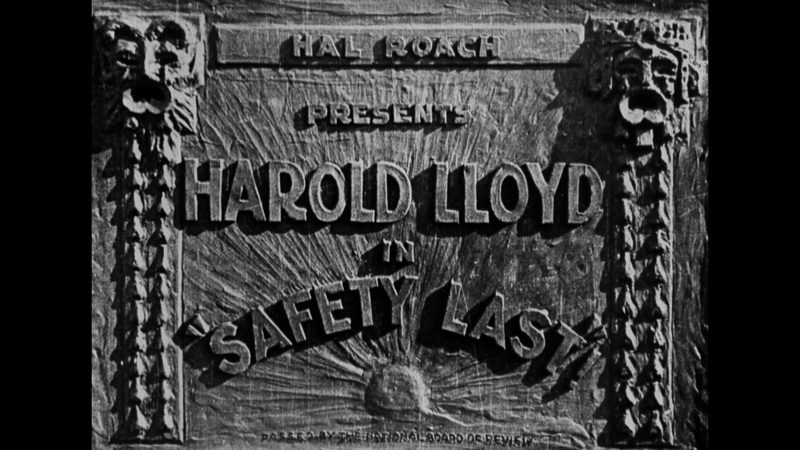 
The Movie
If you ask most film fans who the biggest name in comedy of the silent-film era, most will likely say either Charlie Chaplin or Buster Keaton. Either name is a fine choice, and in a long-term view, they are absolutely correct, but at the time, neither could hold a candle to Harold Lloyd, whose signature straw hat and round glasses were the biggest draws in comedy. And if you show any film fan today the scene of Lloyd hanging precariously from a clock high on the side of a building, they may not know who the man is, but they probably know the indelible image, which is the biggest highlight from Safety Last!, probably the most beloved of Lloyd's lightly-remembered, but critically-acclaimed career (thanks largely to his unwillingness to show the films on TV.).

The story of Safety Last! follows the Boy (Lloyd) as he seeks his livelihood in the big city of Los Angeles, in the hopes of making enough to wed his beloved Girl (Lloyd's soon-to-be real-life wife Mildred Davis.) Working as a fabric counter clerk in a department store though, fortune eludes him, but he spends every dime to buy his Girl jewelry to convince her he's doing well. Eventually the scheme catches up with him, but he has a plan to make some quick cash, involving a human fly who plans to climb the side of the store's building for some easy publicity. It's a moderately simple story broken into two main parts, the store struggles and the big climb, but it's meticulously paced to keep the energy high and the laughs flowing thanks to precision gags by Lloyd and an impressive filmmaking effort.. 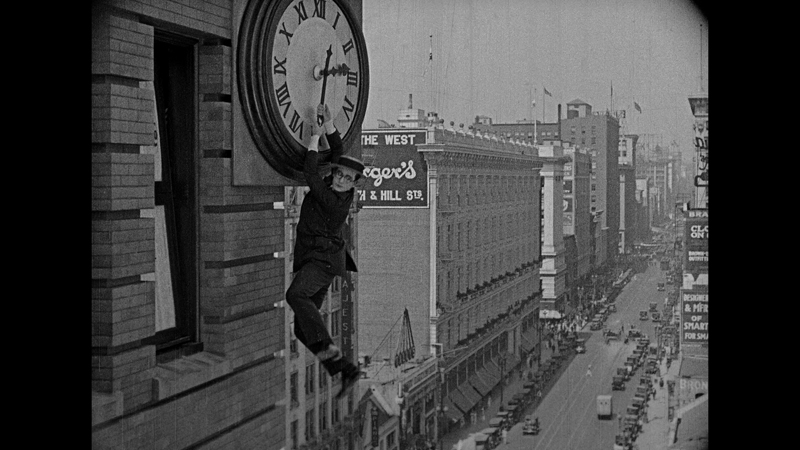 Though the story's entertaining, everything rides on Lloyd, whose confident, yet harried persona makes the Boy's battles all the easier to believe in and root for. Llloyd's connection to the audience was always rooted in his accessibility, as he represented the everyman, overcoming obstacles to succeed in all areas of life. Nothing was handed to him, and he held no obvious advantages, but he could use his quick wit to get ahead. This is never more obvious than in his literal and metaphorical climb to success on the outside of the store's building. Though he's not intended to actually be the human fly, he takes on the challenge and has to face down interrupting pigeons, gawking residents and even a badminton net on the way to the top.

The thing about this massive stunt, which takes up most of the second half of the film (and somehow never feels overdone) is that unlike in today's digital world, Lloyd really put himself at risk in these scenes (to a lesser, but no less dangerous degree) and relied pretty much entirely on his control of his physicality, resulting in some hair-raising moments on the edge of ledges, if you know how it was shot. Once you're aware, you'll get that chilling feeling as you watch him dance on the edge of disaster. Even without that knowledge, it's a fantastic comedic performance, one that has and should stand the test of time. Yes, some bits probably played better back in the day, like when things like floorwalkers actually still existed, but the grace of the comedic dance is easy to appreciate in any era. 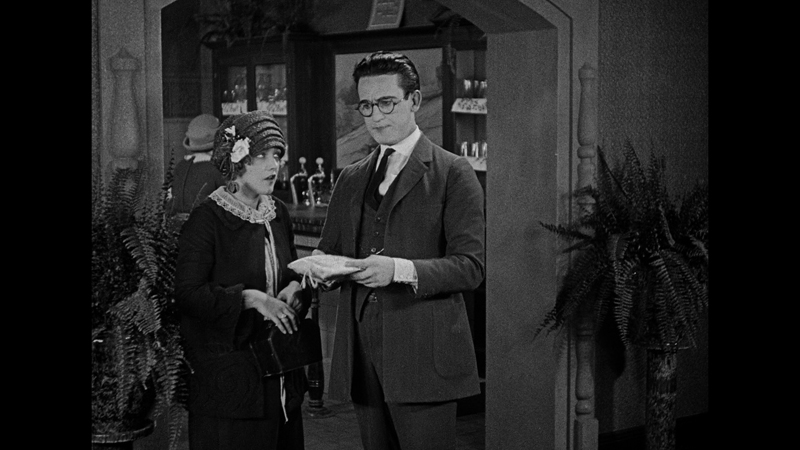 The Disc
Safety Last! arrives on one Blu-Ray disc in a standard clear Blu-ray-height keepcase with a nicely designed two-sided cover and a 20-page booklet. The disc gives the choice to watch the film, navigate the timeline, select scenes, adjust the set-up and check out the special features. Audio options include LCPM 2.0 and 1.0 music tracks, while there are no subtitles or closed captioning (naturally.)

The Quality
The pinnacle of black-and-white home video presentation for me has to be Criterion's DVD of Carnival of Souls. If a Blu-ray of that disc is ever released, it risks blinding the populace thanks to its clarity and contrast. That said, this transfer, of a film now 90 years old, is outstanding. It is not perfect, no, as there is still some flickering in the 1:37.1,, 1080i, AVC-encoded transfer, along with spots of damage here and there, but overall, it would be hard to ask for more out of this resurrection. The level of fine detail borders on obscene it's so high, with the texture of the Boy's hat in close-ups looking as crisp as some of today's films, while the black levels are excellent and the amount of grain in the image is appropriate. Comparing it to the relatively recent Blu-ray release of The Artist, you wouldn't get much of an argument if you said Safety Last! actually looks a bit crisper.

You get two options when it comes to the audio, as you can choose Carl Davis' 1989 score, which is presented as an LCPM 2.0 track, or an improvised score by organist Gaylor Carter, recorded in 1969 and delivered in an LCPM 1.0 track. Both tracks sound both clean and strong, yet appropriately "aged," and your preferences will be subjective more than anything, though personally, Davis' score, which was planned out and works better with the action on scren, is the better experience, as Carter seems to rely on integrating old standards into his performance. At the same time, Carter's performance is likely closer to the original theatrical experience many had at their local movie house.

The Extras
The bonus features kick off with a 2005 commentary by film expert Leonard Maltin and Lloyd archivist Richard Correll (previously available on DVD from New Line.) The track was obviously well-outlined, and both men speak with both expertise on and reverence for the film, which makes for an informative and enjoyable track for both newcomers to the film and longtime fans, as Correll offers tons of details and Maltin talks on a more general level of film history and technique. When it comes time for the big climb, the duo almost become like sports commentators, providing play-by-play and analysis for the massive student sequence.

Three newly restored shorts from Lloyd that pre-date Safety Last! are also included, with Take a Chance (10:21), Young Mr. Jazz (9:50) and His Royal Slyness (21:39) offered with optional commentary from Correll and film historian John Bengtson. The commentary tracks are full of details about the film, and are also something of a travelogue of early 20th-century Los Angeles, as the pair talk a lot about the filming locations. There's some slight repetition on Correll's part between the feature commentary and these tracks, but there's plenty of new, short-specific info.

The feature film isn't even the largest element on this disc, as it includes Harold Lloyd: The Third Genius, a two-part, 108-minute documentary from the American Masters series on the man, his career as a filmmaker, his personal life and his legacy. Featuring interviews with many of his contemporaries and families, along with home movies and set photos, the film reveal a full picture of the man from his origins to his great successes to his late-career failures right to his eventual passing, with stops along the way to look at his biggest productions along the way. It's just about the perfect capsule summary of Lloyd's life.

A pair of new featurettes follow, starting with "Locations and Effects," a short (20:37) documentary on Lloyd's impressive pioneering work in terms of the visual effects, stunts and "thrill comedies." Bengtson returns, joined by FX expert Craig Barron, to discuss the work that went into his signature bits, particularly the big climb. The best parts are a visit to the location of the shooting by the two men, an animation that shows how the shots were likely achieved, as well as several behind-the-scenes photos. The remaining new featurette "Carl Davis: Scoring for Harold" (24:08) is an interview with the composer and conductor, where he talks about his score for Safety Last!, his work creating scores for silent films and how a silent-film score is created, with specific scene examples, in a kind of audio commentary for the score. It would have been nice to hear some thoughts about alternate scores though, like the one included on this disc.

In addition to details about the Blu-ray, the beautifully-designed booklet includes "High-Flying Harold," an essay on Lloyd's work by film writer Ed Park that's a good companion to the documentary on the disc. 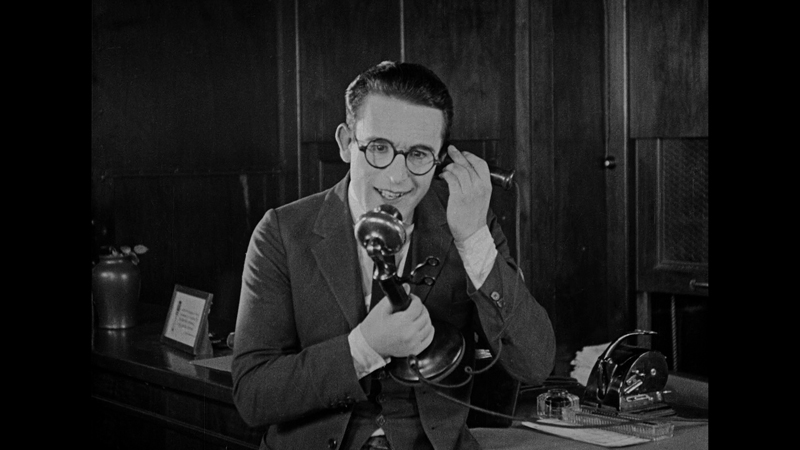 The Bottom Line
Comedy perfection is rare, because by its nature comedy is usually chaotic, the antithesis of perfect. But here, Lloyd's timing is so incredibly dead-on that every note lands with laser-like precision, resulting in some incredibly funny moments, and a movie that's highly entertaining across the board. The presentation is equally impressive, and the wealth of bonus content makes this a master class in Lloyd on one disc. Those new to Lloyd should add this to their collection as an excellent way of getting to know him, and longtime fans should enjoy seeing this film get a right and proper treatment.