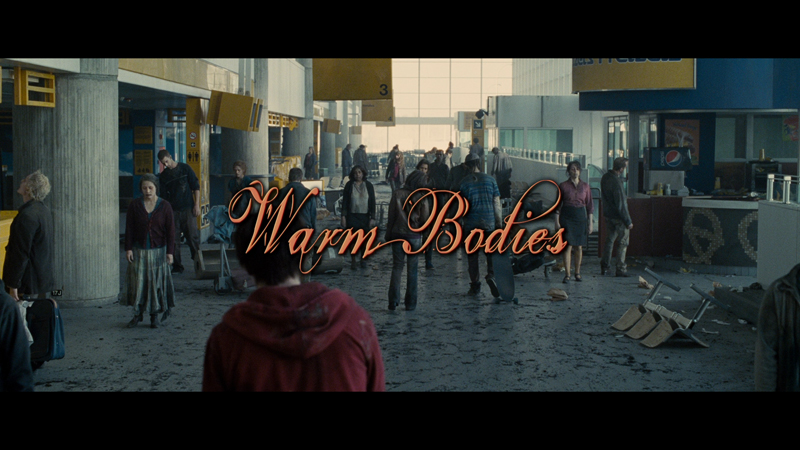 
The Movie
Warm Bodies is as pandering as a film concept can get while still being original and entertaining. Take the fantasy love story of Twilight (complete with a cute, young, blood-thirsty monster) and add in the over-exposed crowd-pleasing genre of zombie movies, give it a PG-13 rating and you've got a flick programmed to sell tickets to proto-goth tweens. The thing is, along the way, writer/director Jonathan Levine (50/50, The Wackness), working off Isaac Marion's novel, managed to integrate comedy, action and a lot of style to craft a fun flick with genuine universal appeal, with enough romance for the Twihards and enough fun and excitement for everyone else, without stepping on either group's toes too often.

Our hero is R (Nicholas Hoult, X-Men: First Class), a shambling zombie wandering an airport aimlessly. Via internal monologue, it's clear he's got a bit more going on upstairs than the other zombies who inhabit the post-infection world, but he's still just walking around seeking to feed on the remaining living. However, when he meets Julie (Theresa Palmer, I am Number Four), just after eating her boyfriend's brains, he finds himself more interested in her heart, and takes her captive. Though at first terrified by a creature she's spent her adult life battling for survival, eventually they get to know each other a bit, and R seems to be becoming more human. There are still plenty of dangers in the world for both of them, but they are willing to give it a try to make it work. 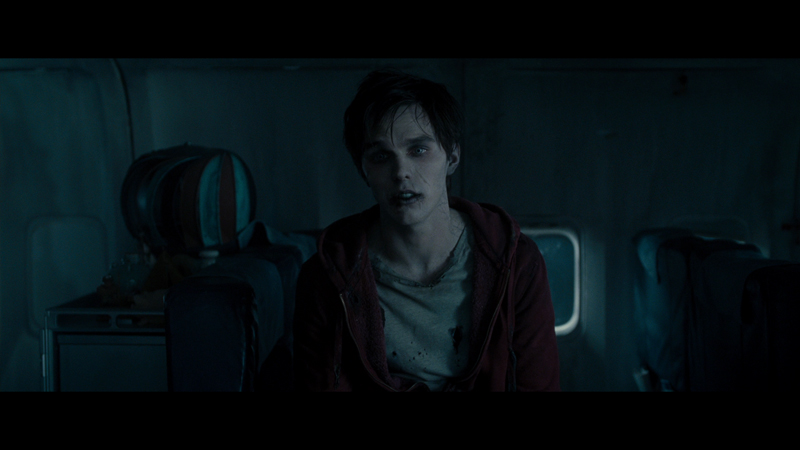 Though there are a decent amount of jumpy scares and action scenes, the key to the film is the romance between R and Julia, an unlikely match to be sure. Though they try to build a parallel to Shakespeare's Romeo and Juliet without any hint of subtlety, including a balcony scene and several corresponding character names, the story ties better to the early themes of Twilight, as the undead hottie defends his lady love from his fellow creatures, and battles his instincts out of his love for her. But it's the humorous tone that's established in the first half of the film, mainly via R's dry inner monologue and the hilarious presence of Rob Corddry as R's zombie pal M, that makes it such a fun film. Though the second half's action prevents the romantic storyline from dominating the film, at the same time Hoult and Palmer's chemistry as the mismatched pair lets their storyline maintain balance with the rest of the film. .

As good as the leads are, the supporting cast is just as great, with Corddry getting laughs with a monosyllabic vocabulary, and Analeigh Tipton (the memorable Jessica from Crazy, Stupid Love) stealing scenes as Julie's best friend. However, they had their work cut out for them, simply by sharing the same film with John Malkovich, who plays the head of the human resistance. He doesn't have the deepest part in the history of his acting career, but, as usual, he's just magnetic whenever he's on the screen, and his presence raises the bar and lends some gravitas to the film's most lesser-known cast. But no one captures eyeballs the way the boneys do. The creepiest of the undead, these skeletal baddies keep things dark and scary, even if they do move in a way that's more than a bit reminiscent of Ray Harryhausen's skeleton warriors. Putting together romance, laughs, action and scares in a single film is no easy task, but Levine and company do it without giving short shrift to any one part, and manages to keep things flowing without any obvious speedbumps, resulting in a fun fairytale that offers something for just about everyone. 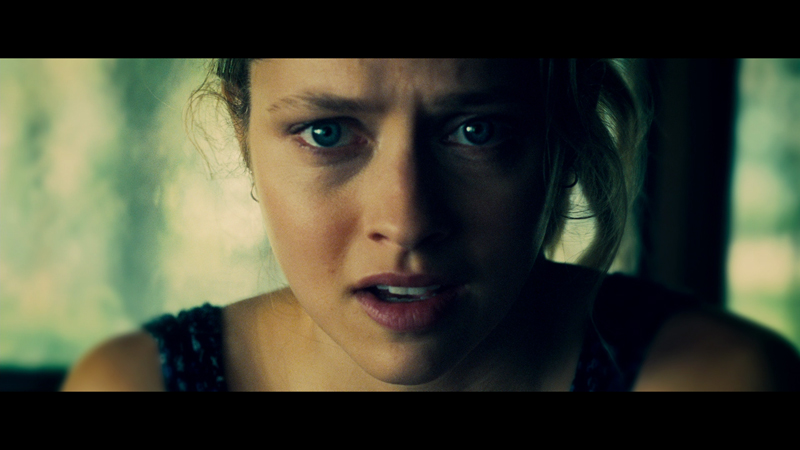 The Disc
A one-disc release, this film arrives on a single Blu-ray Disc in a standard-width keepcase with a digital-copy code (held inside an embossed holofoil slipcover.) The disc has an animated menu with options to watch the film, select scenes, adjust languages and check out the extras. Audio options include English DTS-HD Master Audio 7.1 and Spanish 5.1 Dolby Digital 5.1 tracks, while subtitles are available in English, English SDH and Spanish.

The Quality
The AVC-encoded, 1080p transfer on Warm Bodies smoothly handles the film's divergent color schemes (leaning heavily toward cold blue tints for most of the trip, with touches of warm amber), maintains a nice degree of grain and offers a healthy amount of fine detail, showing off the amount of work that went into the set design and make-up effects. The clarity causes the usual issues with CG content, as the boneys are a bit too obviously separate from the live-action actors, and actualy seem a bit too weightless to seem real. Though there doesn't seem to be any issues with most digital distractions, there are a few moments where banding is a minor problem. When things get going action-wise, it all holds up quite well.

Getting a DTS-HD Master Audio 7.1 track was a bit of a surprise, as most viewers wouldn't think audio bombast when it comes to a zombie romance, however there's a good amount of action in the film that gives the surround speakers plenty of material to work with. There's also a fine soundtrack and some nice atmospheric effects, especially the rain, which make for an engaging presentation. Dialogue is clear and clean, and the bass has a nice impact where implemented. Overall, it's an excellent presentation that really helps put you right in the mix in this post-apocalyptic world.

The Extras
The extras kick off with a very comfortable feature-length audio commentary with Levine, Hoult and Palmer, perhaps aided by someone plying the trio with margaritas part of the way through. They have lots of thoughts about the film and stories from the set, leaving almost no dead air, while sharing lots of production info and creating a fun, very friendly tone (not to mention kick starting work on Tomb Raider 3 it seems.) Their obvious affection for the film carries the track, but the presence of three different accents makes for an interesting listen. It's also an R-rated one, as the language is a touch salty, far more swear-y than the film.

The disc is loaded with featurettes, nine in all, covering various aspects of the production, with all nine entries sharing the same title sequence style, making for a cohesive feel. Up first is "Boy Meets, Er, Doesn't Eat Girl" (Novel and Movie Development), which runs 9:44. Featuring interviews with producers, Levine and the novel's author Marion, this piece talks about how the novel was discovered and optioned before it was published, and how it was developed into a film by Levine. It's an interesting angle on the origin of a film, and the story is told very well. It's followed by "R&J" (Nick and Theresa) (16:21), a look at the two lead actors and characters, with an emphasis on the romance in the movie. Meanwhile, "A Little Less Dead" (The Acting Ensemble) (16:41) spreads the spotlight around a bit more, focusing on the casting process that filled out the roster, and giving Corddry carte blanche to be hysterical, as he jokes for the on-set cameras.

"Extreme Zombie Makeover!" (Make-Up Effects) (10:11) starts to get into the technical elements of the production, talking with Oscar-nominated FX artist Adrien Morot, who provided the excellent make-up design on the film, and showing much of the process via time-lapse photography, while "Beware the Boneys" (Visual Effects) (7:04) discovers the techniques used to create the movie's disturbing villains. Then, the film's impressive production design is covered in "A Wreck in Progress" (Production Design and Montreal) (14:59) which explores the abandoned airport that serves as the film's core set and the work that went into turning Montreal into the world of zombies.

The gun and combat training that the cast did is the focus of "Bustin Caps" (Weapons/Stunts) (10:09), which is fun thanks to the cast's enthusiasm for firearms, including Palmer, who provides 12:38 of home movies from the set in "Whimsical Sweetness." Though a bit nausea-inducing thanks to the rapid movement of her FlipCam, its silly and fun, and you get plenty of her dog to enjoy. There's more silliness in the 4:43 "Zombie Acting Tips with Rob Corddry," an episode of the Screen Junkies' YouTube series (which leaves the show's YouTube-specific ending in place.) Again, Corddry is hilarious, a fact proven true in the 5:07 "Shrug & Groan Gag Reel," which catches the actors breaking, often thanks to Corddry, along with several pranks from the set.

Nine deleted scenes (11:11) are available to check out, with optional commentary from Levine, who does it the right way, talking a bit about what's in the scene and, most importantly, why it was cut from the film. The scenes, a few of which are alternate cuts, don't add a lot to the movie, and were smartly removed/replaced in the final cut.

The extras wrap with the film's theatrical trailer (the far-too-revealing one) and other Lionsgate trailers, along with a code to download a digital copy and an Ultraviolet stream. 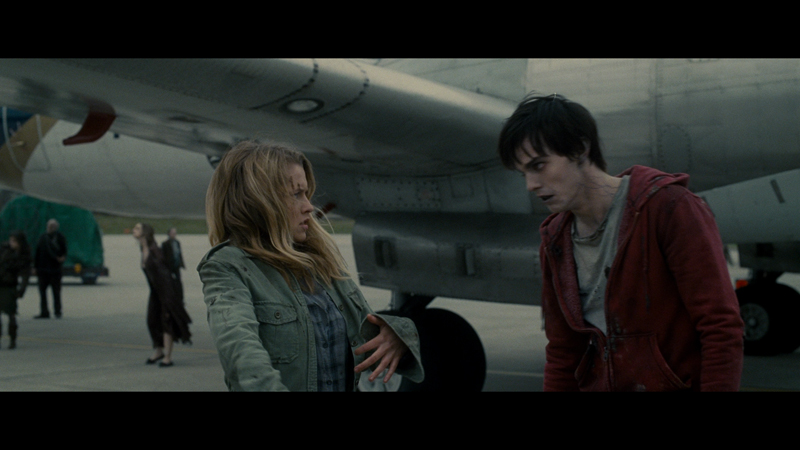 The Bottom Line
It's easy to compare Warm Bodies to its studio-mate Twilight in general terms, but as an experience, they couldn't be more dissimilar, with Levine's zombie action-romance ending up far more entertaining and original for most audiences. This Blu-ray offers up a solid presentation, and a pile of entertaining and informative extras that fans of the film will definitely want to check out. After getting sucked in by the film's amusing trailer, it's great to see the final film deliver on its promise, and to see a non-blockbuster get top-flight home-video package.