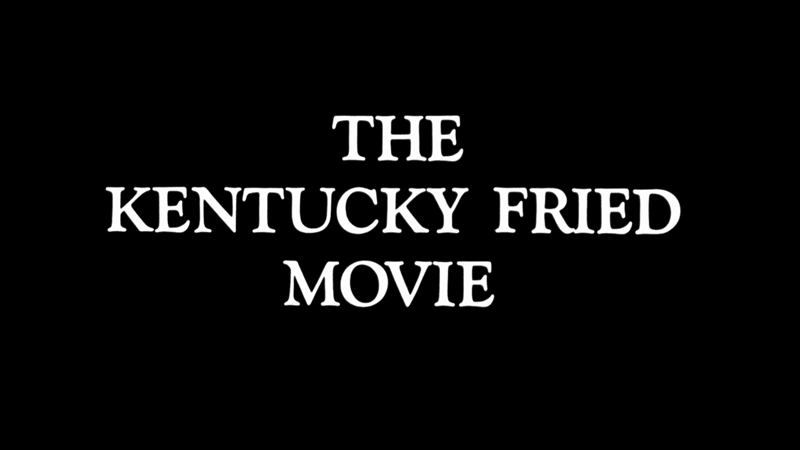 
The Movie
In the realm of the spoof/parody genre, the undeniable masters are ZAZ, the acronym for David Zucker, Jim Abrahams and Jerry Zucker, a trio of filmmakers who set the stage with comedy classics like Airplane!, The Naked Gun and Top Secret!. Unfortunately, their career as a team petered out early, leaving their early work as their best work, starting with their first film, the low-budget sketch movie The Kentucky Fried Movie, directed by a young John Landis. One of a small genre of sketch movies unsuccessfully resurrected by the recent Movie 43, The Kentucky Fried Movie is best known for its blend of comedy, nudity and politically-incorrect jokes, but it remains a fun watch today.

While Landis's later Amazon Women on the Moon would figure out a better concept for stringing together the sketches, The Kentucky Fried Movie offers up a selection of ads, trailers, news segments and more, wrapping around a "feature film," the kung-fu action parody A Fistful of Yen. There's a little bit of everything here, including T&A comedy, pun-loaded wordplay, sight gags, spoofs, one-joke segments and absurdist sketches.A lot of what powers the comedy would be considered politically incorrect today, and undoubtedly sophomoric, which probably explains why so few films have been made in this genre (and perhaps why the ZAZ' style of comedy has mostly fallen out of favor. (That, and the need to pay attention to enjoy their films, which has long been a problem for them.) 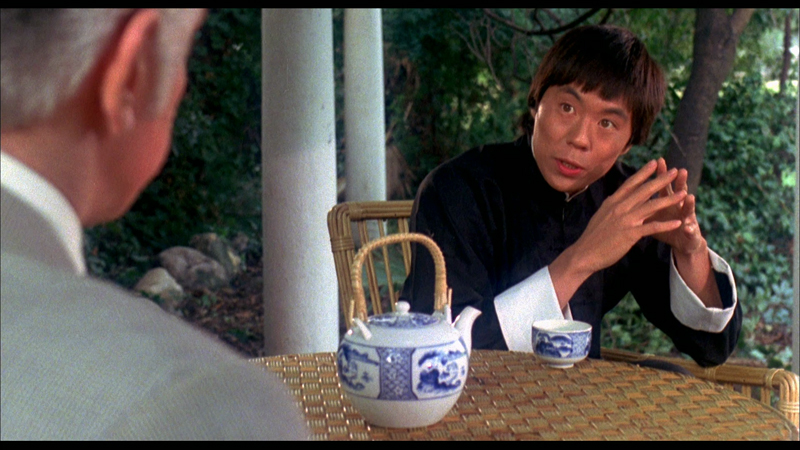 A Fistful of Yes, which takes up a large chunk of the middle of the film, is obviously the most memorable, as the kung-fu parody features all the hallmarks of the ZAZ brand of comedy, as secret agent Loo takes on the evil forces of Dr. Klahn in a Bruce Lee-style adventure. This segment has plenty of highlights, with plenty of sight gags (the alarm in Klahn's lair is laugh-worthy every time) and silly spoofs, like an interrogation that takes the form of "The Dating Game," as well as some classic elevation of exaggerations, as a series of increasingly obvious listening devices are revealed. That the film looks and feels like an old-school chop-sockey flick is what sells the spoof though, and established what would be ZAZ' greatest strength in their films, namely their ability to mimic the genre they were tackling, in order to let the jokes stand on their own.

It would be no surprise if the majority of the film's male fanbase became devotees in their early teens, as the sense of humor sits firmly in that sweet spot, seen clearly in the ridiculous Zinc Oxide and You or the simple, yet hilarious household odors sketch, and the copious female nudity appeals to that demographic as well. The classic fake trailer for Catholic High School Girls in Trouble may be the most effective use of female breasts for comedic effect in movie history, the preview for Cleopatra Schwartz is funny and features a foxy blaxploitation heroine, and a sketch which pairs a hot and heavy hook-up with a TV news broadcast walks a fine line between sexy and goofy. Even when the film isn't flashing a pair of breasts at you, it's often simply being silly, with the "Courtroom" sketch piling on the wordplay gags at an incredibly rapid pace and with no shame at all (plus there's a bonus appearance by Airplane! scene-stealer Stephen Stucker (and a dildo too!)) Though there are a few sketches that rise above the somewhat low bar, particularly a dark ad for a board game built around the JFK assassination, there's nothing wrong with a comedy that just goes for laughs. 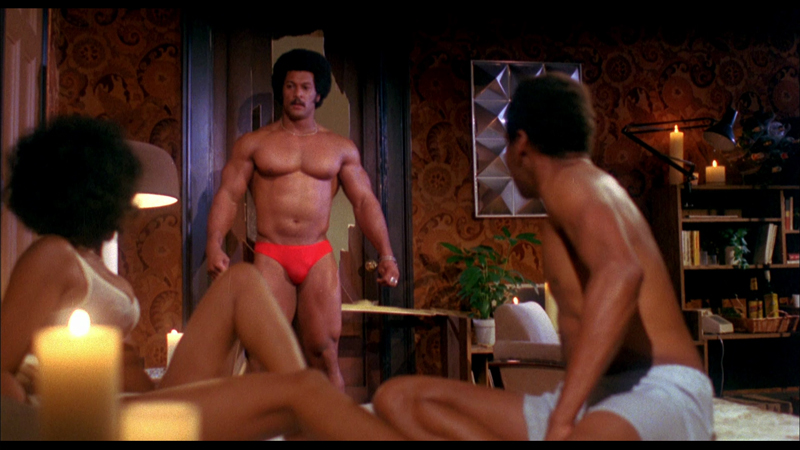 The Disc
A one-disc release, this film arrives in a standard Blu-ray keepcase with a dual-sided cover that has the more attractive (though less thematically appropriate) bomber-plane art on the inside. The disc has an animated menu with options to watch the film, adjust languages and check out the extras (there are no scene selections.) There are no audio options, but subtitles are available in English.

The Quality
The 1080p, AVC-encoded transfer on this film does a decent job with less-than-ideal materials that varied in quality even in the source (with different stocks and techniques used during filming. There's definitely a bump in quality from the previous Anchor Bay DVD release, with an overall sharper (but not entirely sharp) image and an improvement in the color, which is richer than before. The visual quality of the main feature, A Fistful of Yen remains a faithful parody of old kung-fu flicks though. It's the kind of presentation that says "this is probably as good as its going to get," even with a good deal of scratches, dirt and noise, and seemingly ever-present flickering in the brightness.

There's not much to the audio presentation on this DTS-HD Master Audio 2.0 track, as can be expected when you're dealing with a low-budget, late-'70s comedy, but there are no noteable problems either, as the dialogue, sound effects and music are all clear and distortion-free, with the original mono mix doubled up here for a center-balanced delivery.

The Extras
Before we get into what's included, let's just talk about what's been left out. The previous DVD release offered nearly 20 minutes of on-set home videos, a pretty entertaining look at the production's loose feel, while you also had a behind-the-scenes still gallery and some of the old-school text bios for the filmmakers. Of the group, the home movies is obviously the biggest loss when it comes to this release.

Carried over from the 2000 DVD release is a feature-length audio commentary with Landis, the Zuckers, Abrahams and producer Robert Weiss. This is a classic track, as ZAZ and Landis deliver just the kind of fun, yet informative commentary you hope for from a movie like this, discussing how scenes were shot, how the movie came together and who all the unknown actors are, with some very healthy doses of self-deprecation. If there was to be a retrospective book written about this movie, you'd hope it would be as good as this great oral history.

Fortunately, this isn't just a case of just porting (or not porting) extras, as Shout! Factory has come through with a 62-minute interview (apparently shot in 2010) with the two Zucker brothers, who respond to title-card questions by talking about the film and the rest of their careers with a light, enjoyable tone. There are some interesting topics covered, including a scene mentioned in the credits but missing from the film, and thankfully there's very little overlap with the commentary, as freed from a direct connection to the film, they can cover plenty of different topics, including their thoughts on the art of comedy, their sources of influence and even their less comedic work. A fine addition to the film for fans of two-thirds of the ZAZ.

Also included here (and on the previous DVD) is the film's trailer. 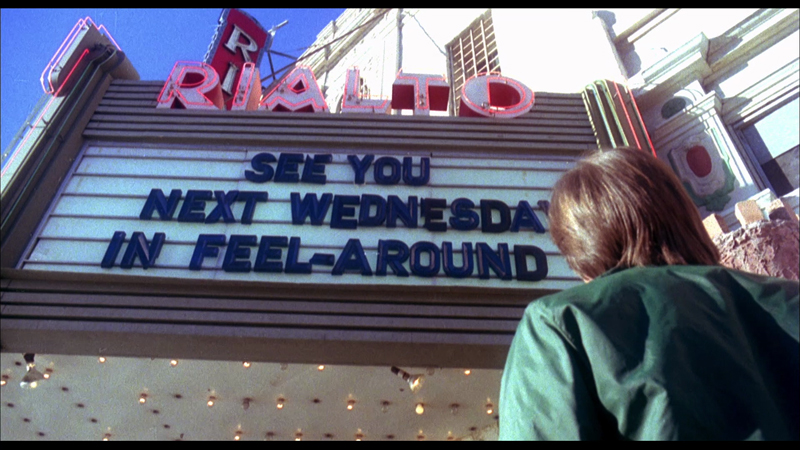 The Bottom Line
Is Kentucky Fried Movie a comedy classic for the ages? Probably not, but when it hits, it can be hysterical. Could you make something like it today? Absolutely not, as it revels in politically incorrect comedy, even if it hardly feels as aggressively offensive as the spoofs and parodies we get today. Instead, it's a silly, ribald good time, with some iconic gags, and this presentation, with a lengthy new chat with the Zuckers, makes it worth the upgrade for owners of the previous release. If you're new to the film, but love movies like Airplane! or The Naked Gun, you owe it to yourself to see where it all began.