Image // Unrated // July 16, 2013
List Price: $39.98 [Buy now and save at Amazon]
Review by Stuart Galbraith IV | posted August 14, 2013 | E-mail the Author
Watching Combat! (1962-67) again for the first time in about ten years, I kept thinking how difficult, if not impossible, it would be to try and produce a series like it now. Following the adventures of an American squad of G.I.s fighting their way through Vichy France in the months following D-Day (like M*A*S*H, it ran years longer than the historical space it occupies), Combat could only have been made during the early to mid-1960s.

At the time, primetime network television had developed a streamlined but unsustainable production method that had evolved from the B-movie and theatrical film series production of the 1940s and early ‘50s. By 1962 it was possible to shoot a program like Combat! in 35mm and give it a slickness rivaling medium-budget feature films.

In Combat!'s case, that included a second unit sent to France to film establishing and long shots incorporating explicitly French topography and architecture. This footage was then (usually) seamlessly matched with first unit scenes shot on MGM's expansive but rapidly decaying back lots, standing sets all torn down by 1973. It probably didn't take much to make its European streets look as beaten and shot up as they do on the series. Moreover, the series began less than 20 years after D-Day, and so props - the guns, the tanks, and other hardware needed - were easily accessible both in Hollywood and on location in France.

Finally, Combat!'s prolific output (152 hour episodes over just five seasons) was made possible due to a production method common to numerous hour dramas of the period, Maverick and Rawhide being two other famous examples. In short, the series had not one but two stars alternating the leading role. On Combat!, Rick Jason and Vic Morrow were the stars, but often Jason would be the focus of an episode in which Morrow did not appear, or vice versa, though they'd also appear together equally in some shows, or make token appearances in programs otherwise focusing on the other.

I hadn't watched Combat! at all since 2004, when I was bitterly disappointed by a "Season One, Campaign One" DVD set licensed by Disney to Image. Those episodes looked terrible, smeary old video masters that were time-compressed to boot. Combat! The Complete Fourth Season, though below par considering how good it should look, is still an improvement. Clearly old masters are again utilized, but to my eyes these are more acceptable to what I saw of the first season shows. (Probably this is a cost issue, remastering more than a hundred hours of shows, but it's also possible the ownership of Combat!, which was a Selmur Production for ABC, may have something to do with it. Selmur's other films and TV shows have likewise been sketchily released.) 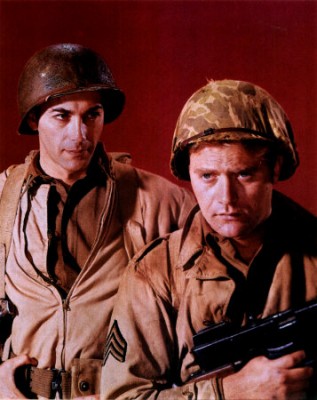 The legacy of Combat! is two-fold. In retrospect, the show proved a training ground for a wide range of talent, many of whom went on to bigger and sometimes better things. Directors Robert Altman, Richard Donner, Burt Kennedy, and Tom Gries all got big breaks on the show, which had scripts by the likes of Richard Matheson, Richard Maibaum, Robert Pirosh, and others. By season four Gries was still directing Combat! though most of the others had moved on.

The show was, clearly, influenced by the early-'60s fascination with all things military. Soldier-themed toys and comic books where all the rage with children, and World War II veterans, by then in their early forties, ate up big screen recreations of famous battles: The Longest Day (1962), The Battle of the Bulge (1965), Tora! Tora! Tora! (1970), etc.

Combat! struck a chord. As an episodic, weekly series produced on a television budget (about $125,000 per episode), shows were usually confined to the adventures of a single infantry squad. In telling its stories from the point-of-view of the ordinary foot soldier, audiences around the world embraced its universally recognizable characters and themes. It was, for instance, phenomenally popular in Japan.

As television historian Stephen Bowie points out, Combat!'s season four is composed of the same writing and producing staff as seasons two and three, so it's pretty much business as usual. The episodes I watched were intelligent, well acted, and by television standards expertly produced, though none really stood out. "The Linesman," for instance, directed by Tom Gries, is a decent enough character study with Jack Lord playing a martinet Signal Corps officer, whose psychological problems make him an ineffective leader running afoul of Chip Saunders.

"9 Place Vendee" (a clever title whose meaning is revealed at the end of the episode) is a Gil Hanley show with the lieutenant searching a German-occupied French village for a wounded OSS man. There he encounters a French boy (Pat Michenaud) who is desperately trying to tell the American something, but neither can understand the other's language. You'd think after three seasons Hanley would have picked up more than a word or two of French ("Because," argues reader Sergei Hasenecz, "it would only have been a matter of weeks or months since D-Day, and frontline combat troops would not have had a lot of time for fraternizing with the locals."), but the overdone episode avoids the obvious: why doesn't the boy draw a picture or use hand gestures to convey his message? Nevertheless, that the show tries whenever possible to have the French speak French and the Germans German is an achievement. You'd never see that on Hogan's Heroes.

The season's 31 episodes, spread across eight compactly packaged single-sided, dual-layered discs, are acceptable but not great, sourcing older video masters. On my largish monitor their age was noticeable but the shows still watchable. The Dolby Digital mono audio, English only with no subtitles, is okay.

My big complaint is the absurdly unhelpful packaging, which nowhere - not inside the case, as a paper insert, on the discs themselves - are episode titles listed. They're not even numbered on the DVDs, so the viewer looking for a specific episode has no way of knowing what's where and how to find it.

The main supplement is bits of trivia on each episode as provided by Jo Davidsmeyer, author of the book Combat! A Viewer's Companion to the WWII TV Series. Also included are photo galleries and audio commentaries, none of which are identified on the packaging, either.

Combat! is a good show poorly served on DVD, though this season's set is somewhat better. Recommended.