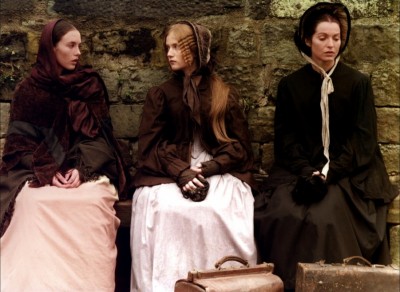 Please Note: The images used here are taken from photos provided by the Cohen Film Collection and promotional materials, and do not directly reflect the picture quality of the Blu-ray edition under review.

The French director André Téchiné, like his more internationally famous filmmaking countrymen François Truffaut, Jean-Luc Godard, Eric Rohmer, and Jacques Rivette, got his start as a critic at the fabled Parisian film journal Cahiers du cinéma. But he was of a generation that came after the enfant terrible-isms of the late-'50s New Wave, and it's fair to say that his body of work bears a less ferociously imprinted stamp of personal vision and style than those of his predecessors. The downside of this comparative reticence has been a body of work that's less like a nonstop, reckless juggernaut (as is Godard's) and more like a loose, casual constellation, with more dim or diffuse (if often interesting and worthy) stars like The Girl on the Train and Unforgivable than big, bright, luminous landmarks like 1995's Wild Reeds. His 1979 film The Brontë Sisters (Les Soeurs Brontë) -- now rescued from undeserved obscurity, restored, and released to Blu-ray by the Cohen Film Collection -- is an unequivocally bright star, reinforcing the upside of Téchiné's more detached, considered, case-by-case, journeyman/artisan-like approach: Whether by marvelous luck or insightful, self-aware design, his cooler, more studied and formal take on the literary bio-film results in something much more affecting and powerful than one might have expected. 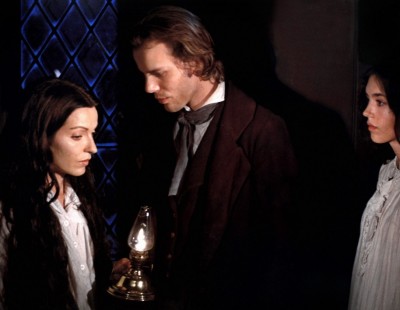 One wouldn't, in fact, be quite sure what to expect from the description: A Frenchman making the definitive film, in French, on the lives of Charlotte, Emily, and Anne Brontë, the sisters from gray-skied Northern Britain whose 19th-century literary output -- Jane Eyre (Charlotte), Wuthering Heights (Emily), and Agnes Grey (Anne) -- has come to be an eternal cultural touchstone, a still widely-read and much-discussed worldwide symbol of England's contribution to world culture? But it works, and precisely because of Téchiné's distance, his knowledgeable but more dispassionate outsider's view and deep fascination and curiosity. He and co-writer Pascal Bonitzer do not chain themselves to a timeline of the most presumably important or formative events, as a biopic intending to give us "the whole story" of the Brontës might have done. Instead, they focus on the less than 10-year period in which Charlotte, Emily, and Anne, while living very quiet, demure country lives whose strangeness was only intermittently visible on the surface, had their surreptitiously-written, pseudonymously-published novels meet entirely unexpected and unintended public success. The narrative blueprint Téchiné and Bonitzer devise is simple, even skeletal: The sisters (Marie-France Pisier's (Camille Claudel, Possession) Emily; and Isabelle Huppert's (I Heart Huckabees, Amour) Anne), good and dutiful daughters of a widowed pastor (Patrick Magee) living in the shadow of their dissipated, unfocusedly "artistic" and "gifted" brother, Branwell (Pascal Gregory, La Vie en rose), each rebels in her own quiet but determined way against the repressive mores of the time, experience doubt and pain in family life and love, and finally, due to Charlotte's ambition, have their work published and celebrated, a success as bittersweet as it was unexpected. 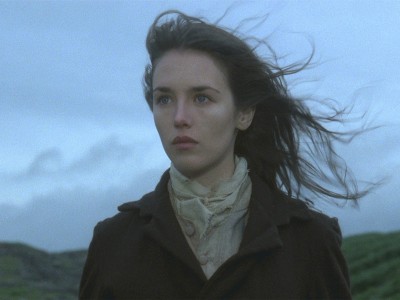 But the film as a whole isn't simple at all. Téchiné and Bonitzer go at their pared-down narrative obliquely, sumptuously; what they've is almost excised specimen-episodes from what is known of the Brontës' experiences to hold up to very careful, very detailed scrutiny, and they are in no rush to add it all up or connect the dots for us. Their selection of story-pieces don't have a literal-minded, direct, cut-and-dried, cause-and-effect relationship to one another; they are rather placed side by side with sometimes startling, puzzling ellipses, and played out with indefatigable, patient, calm assurance and striking beauty that leaves a deep, niggling, unshakeable impression of the physical textures, the inescapable formality and inevitable curiosity and yearning of the sisters' lives inside a well-appointed, cloistered bastion of "civilization" -- their father's warm, well-lit house -- sitting unstably amid a wild, windswept, terrifyingly beautiful Northern-England vortex of untamable Nature. These tense, abrasive juxtapositions (inside/outside, wilderness/civilization, for which Téchiné inspiredly borrows Wuthering Heights' windows-and-doors motif to render onscreen as strikingly suggestive images and cinematic spaces) blurring and bleeding into one another were the glowing ember that fueled the Brontës' great novels and has made them perpetually resonant, captivating, and disturbing -- all qualities with which Téchiné, employing the awe-inspiring precision and measured formality of lightings, framings, and movements he's created with D.P. Bruno Nuytten (a frequent collaborator on Marguerite Duras's films), imbues every savored, simultaneously gorgeous and disconcerting frame of The Brontë Sisters. The presence brought by Téchiné's stellar actors completes the painstakingly assembled picture of stifled, civilized indoor comfort longing for the destructive but free abandon of what's outside: Pisier, Adjani, Huppert, and Gregory (whose character was never a success but who is far from minor in the film; the toll taken by his romantic travails, alcoholism, and drug addiction causes Branwell to fade away physically, mentally, and artistically even as his sisters flourish, lending an air of inadvertent but unmistakable sibling-rivalry vampirism to that integral part of the story, as well as creating a nod to the helplessly parasitic side of any artistic creation drawing from life) all discipline themselves to turn in restrained, tempered performances whose chilliness is perfectly of a piece with the picture, as apt and magnetic as that of the film in its entirety. 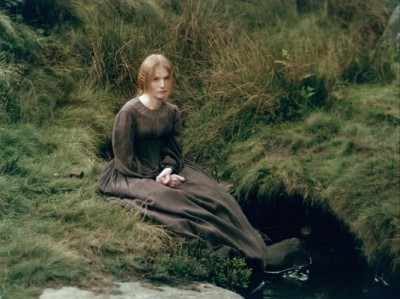 Téchiné, his excellent cast, his smart co-writers (the great screenwriter Jean Gruault (Jules and Jim, Rossellini's The Taking of Power by Louis XIV) also lent a helping hand), and his brilliant cinematographer all invent, inspire, and balance one another in such a way as to offer up a film that's as much an experience shared as famous life stories recounted. Their evocative, elliptical approach to the Brontës' lives gets us inside of them -- inside of the slow, dutiful days and candlelit nights and all that dark, vast, wild nature visible just outside their protective but imprisoning parish windows -- much more effectively than a thorough, fully explanatory biographical rundown ever could have. Once you've finally roused yourself from the film's entrancing spell, you probably wouldn't be able to draw up a dated chart of the Brontës' existences and works. What you are left with is something much deeper, much less expressible, much more valuable: You can honestly claim, after your immersion in the aura carefully created by all involved in each of the film's narratively minimalist, seemingly dissociated episodes, not to have learned about some famous 19th-century novelists like a literary-history lesson, but to have been well embedded within, if only for a couple of hours, the sensibility and physical character of the place and time they inhabited, to have experienced the actual feel and flavor of their world as it shaped them and provoked their strange genius. 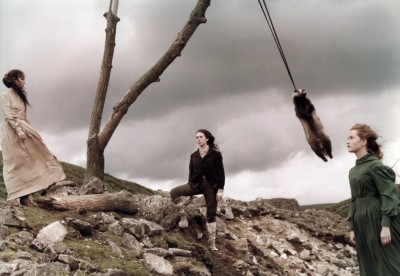 
The transfer presented here, retaining the film's original theatrical aspect ratio of 1.85:1, is in most important ways impeccable: A great celluloid-like texture has been retained in the image (no overuse of DNR or other corrosion of all-important texture due to digital clean-up processes), while the predominantly cool, gray, moors-appropriate color/lighting palate (along with so many dark interior scenes with dimmer/intricate lighting) chosen by Téchiné and cinematographer Bruno Nuytten wonderfully stable and solid as they appear here. After some careful consideration, I've marked the video quality down one star due to a technical flaw in this edition -- an intermittent stutter to the image (that looks like a very brief, blink-and-you'll-miss-it jump cut at odd moments) that is noticeable, appears to be due to an encoding error, and should have been better vetted, but does not in the end mar the experience in any irretrievable way.


An uncompressed PCM 2.0 soundtrack (in French with English subtitles) offers up the film's original mono sound flawlessly, with the mostly dialogue-driven aural plane rendered clearly, richly, and sonorously, with no distortion or imbalance in the sound to be discerned at any point. 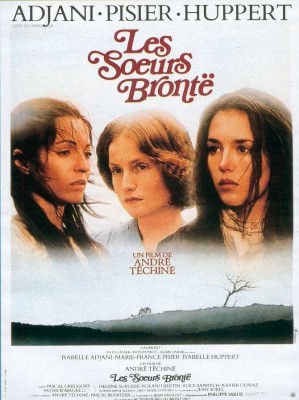 
--Feature audio commentary with critic Wade Major and Brontë scholar Sue Lonoff de Cuevas. Both seem quite knowledgeable in their fields and provide many a tidbit of relevant info, but it's more on the trivial side (Major points out the delicious cameo by legendary French semiotician Roland Barthes and reminds us that Patrick Magee, who plays the Brontë patriarch here, was favored by Stanley Kubrick, who cast him in Clockwork Orange and Barry Lyndon; Cuevas tells us whether this or that event or costume is historically accurate or if poetic license has been taken), but they seem disorganized and sometimes work at cross-purposes, frustratingly interrupting or trailing off lines of thought. It's a conversation worth dropping in on, but not necessary to hear in its entirety.

--On the other hand, Dominique Maillet's 2012 documentary The Ghosts of Haworth (60 min.) -- which covers the conception, making, and reception of The Brontë Sisters through interviews with Téchiné, co-writer Pascal Bonitzer, Brontë-specializing academician Claire Bazin, costumier Christian Gasc, and actor Pascal Gregory (Branwell Brontë) -- is a focused, enlightening glimpse into what the film's creators were going for, and well worth watching for both its bounty of details on this oft-overlooked film (it had a mixed reception and was considered a failure by many; production was difficult and marked by a perennial rivalry between Adjani and Huppert) and the sheer entertainment of its engaging, conversational making-of-a-film storytelling.

--Two theatrical trailers, one for the original 1979 French release and one from the recent theatrical re-release. 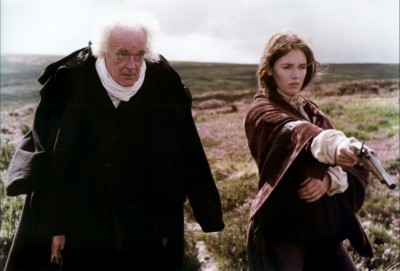 A cool but invigorating film about the most famous and beloved trio of literary siblings ever, André Téchiné's The Brontë Sisters tells the story of Charlotte, Emily, and Anne in a way that steps well outside the parameters of the biopic, the literary adaptation, or the period piece. But by avoiding the most obvious focuses -- the writing of the novels, the trajectory of the unlikely but brilliant careers, the complete rundown of important life events -- to simply dramatize and, more importantly, capture the flavor and feel of the Brontë's existence, Téchiné, his co-scenarists, his crew, and his cast (centered around three of France's most accomplished and admired actresses) offer up more insights into the authors of Wuthering Heights, Jane Eyre, and Agnes Grey than any more diligently biographical or psychoanalytical approach could have done. Limiting itself to the period in which the Brontës' surprise literary output and fame eclipsed the "great things" expected from their tragic brother, Branwell (Pascal Gregory), Téchiné lets us see and experience the strangeness of the Brontës' privileged but isolated rural world, where they suffered rivalries, losses, and disappointments in love against a backdrop of upright English mores sharply contrasting with the immediately present, wild beauty and terror of the roiling, wide-open elements. In telling the story of this stifled but prodigious family of great artists, Téchiné refuses to be literal-minded or overly explanatory: He shows us, brilliantly, how the Brontës' masterpieces arose from their unusual, contradictory experience of their world, the clash of harsh, free nature and pious, cloistered civilization seeping into their bones and spirits, and it's all rendered so vividly, so indelibly, and with such near-obsessive savor that it seeps into us, too. The Brontë Sisters is a haunting, subtly but powerfully moving experience and one of the hit-or-miss Téchiné's very best films. Highly Recommended.