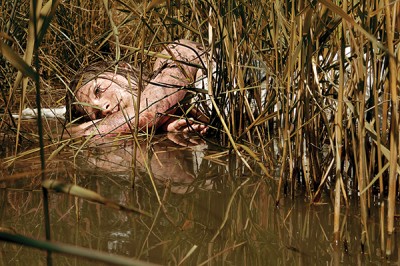 Please Note: The images used here are taken from promotional materials provided by Music Box Films and do not directly reflect the picture quality of the Blu-ray edition under review.

A few years back, there was a glossy, nasty little Joel Schumacher picture, 8mm, that, while just the kind of tawdry, rancid experience one had by then come to expect from Schumacher, at least had the courage of its (lack of) convictions: It was "fun," a ridiculously grim mystery-thriller about a snuff filmmaker, sordid but disposable, baldly absent of any other aspiration than to titillate and divert through inappropriately grisly means. A similar picture from Germany -- the first feature by young Swiss-born director Baran bo Odar -- has recently washed up on our shores, buoyed by a tidal wave of acclaim, and given that its mix of rank silliness and hyperactive, pummelling technical proficiency render it indistinguishable from much slick, glib, forgettable Hollywood fare (the kind exemplified by Schumacher's film), one has to wonder why. Could the stereotype of us American movie reviewers -- that we're unduly impressed by a film so long as it comes in a foreign language and subtitled, even if it's clearly subpar and pretentious -- have some truth to it, at least in this case? Are that many people who should know better such suckers for fancy camera movements/blocking and pretty cinematography that we can be blinded to the uselessness of such style when it's unwarranted and intrusive? Those are guesses, not accusations, but upon actually watching the inexplicably acclaimed thing, I feel certain that, one way or another, this way-overdone, stretched-far-too-thin murder mystery has somehow pulled the wool over the eyes of those who have recommended it. 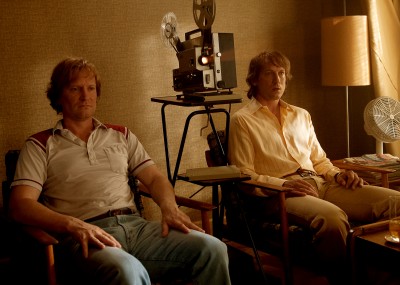 The Silence is based on a bestselling novel by Jan Costin Wagner, the story of which, at least to judge from the film's treatment of it, is a prolonged dime-store psychoanalyzing of two men -- student Timo (played by Wotan Wilke Mohring) and janitor Peer (Ulrich Thomsen, The Celebration) -- who recognize one another's evil appetites as they lurk on a park bench near a playground, get together for screenings of Peer's creepy stag films featuring underage girls, and ultimately are responsible (Timo as accomplice and passive witness, Peer as violator) for the rape and murder of a teen girl on a country road. That was in 1986 (the film's prologue), and the crime was never solved. Now, 23 years later, Timo, who left Peer behind after witnessing his crime, is a successful bourgeois architect with a nice house, a pretty wife, and a beautiful toddler. A copycat/repeat crime involving the disappearance of another girl under near-identical circumstances, however, sucks not only Timo but the police investigators (The White Ribbon's Burghart Klaussner, Oliver Stokowski) still reeling from their failure more than two decades ago; the now-missing girl's parents (Karoline Eichhorn and Roeland Wiesnekker); and the strong but still grieving mother (Katrin Sass) of the '86 victim all back into the vortex of unthinkable violation, destruction, and despair. Is Timo's hunch about his former friend correct, and is his tortured conscience powerful enough to make him risk his rehabilitated new identity by spilling his own sordid involvement in Peer's long-ago rape and murder to the police? Will the forced-into-retirement Krischan (Klaussner), an investigator on the original case and the middle-aged bereaved mother with whom he's now reunited find solace in their affair? Will the morally impelled police detectives look for the new missing girl, comprised of mentally unstable, recently psychiatrically hospitalized, but justice-impassioned David (Sebastian Blomberg) and the pregnant Jana (Jule Bowe) triumph over the careerist expediency of their boss (Stokowski)? And who, after all, is the killer? Can we or Timo be sure it's once again the same man that he watched commit a similar crime all those years ago?

It's not just that each one of those questions is answered by the film with either perfunctory, simplistic ease or with a trailing-off that, while probably aiming for ambiguity or complexity, achieves neither in the shallow framework Odar creates; it's that the way the director incessantly tries to lend urgency, suspense, or -- falling most short of all -- emotional power to these narrative teases is flawed in its very conception. To call The Silence "stylish" is not actually a compliment; Odar has overdressed by far his simple, almost entirely predictable genre hybrid (murder mystery, police procedural, a little noir here and a little trashy and lurid, if uncopped-to, pulp exploitation there, with characters so undistinguished from their counterparts in many other films that watching this ensemble of fine, well-proven actors try to play them is like watching a world-class cyclist do their best with a tricycle) with all manner of slo-mo, unnecessarily busy and overbearing sound design, serenely/evenly-floating overhead-Steadicam vistas, flashy editing, and striking compositions (the film's go-to promotional images of the killer's red car against a golden wheat field, shot from a stark, symmetrical high angle, are intriguingly pretty, if nothing else). The chasm separating all this portentous, earnest, superfluous ornateness and the simple, familiar characters and their stories (too many of them to be very well explored, but that's symptomatic, too; there's nothing here to indicate that the filmmaker has the depth or concentration that a closer, more narrow and penetrating focus might require) transforms the film into a real travesty, almost a parody of stylistic posturing and attention-grabbing technique offered in lieu of anything thoughtful, insightful, or actually brave or risky in the material. 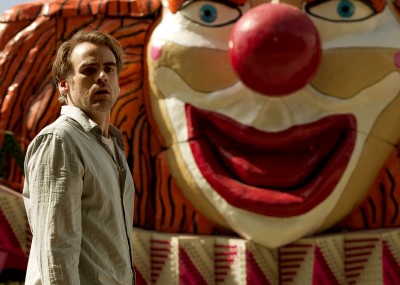 There's a place for this kind of indulgence in "pure," excessive style; it worked just fine in Drive, or in another first feature by a German wunderkind, Run Lola Run (if you want a much higher-quality slice of under-the-radar newish German cinema in a thriller vein, check out Hans-Christian Schmid's Requiem), and Brian DePalma and Quentin Tarantino have both shown themselves amply capable of using forthright stylistic flourishes to explore, stretch, deepen, and even critique genres that, unlike Odar, they're embracing and genuinely understanding as such, including their true histories and properties and perhaps possibilities yet to discover. But The Silence's being all grandstanding show serves no purpose; it certainly doesn't help it attain the Importance and deep-thinking psychological, social, and moral observations its creator seems obliviously convinced it has in spades. Odar is hardly untalented; he easily has what it would take to be a more clever than average director of music videos or TV commercials, or a still photographer for commercial or fine art. But as a cinematic storyteller, he fatally misreads the pulp-fiction stuff of his film as both more solemn and more slickly banal than it can reasonably bear. The Silence announces no more and no less an arrival than that of a younger, German version of the Joel Schumacher who made 8 mm; the tragedy, the final blow, is that instead of Schumacher's trashy cynicism, his work is suffused with a surplus of unearned self-seriousness, and that only makes the experience even more grating and insupportable. 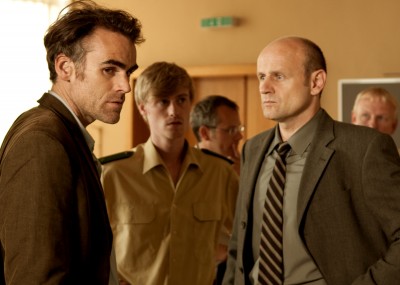 
The widescreen (at the original theatrical aspect ratio of 2.35:1) transfer of The Silence looks glorious. Nikolaus Summerer's cinematography, saturated (often overly so) with color and light, is pristine and glossy to begin with, and the way it's presented here preserves that absolutely. There isn't a second of unstable darks/solid colors or any edge enhancement or overuse of DNR to mar the picture quality; the film may not be good, but the quality with which it's been transferred is very high.


The way sound is (ab)used is, aesthetically speaking, an insurmountable problem for the film, but the audio quality of this disc -- presenting the film's Dolby soundtrack as a DTS-HD Master Audio 5.1 surround track, in German with optional English subtitles -- is unimpeachable. Odar has had his sound designers go full-force on the surround-sound buzzing and rumbling and swooshing and slamming (all, misguidedly, for emphasis), and it comes through full-force, too; it all sounds very solid, clear, resonant, multilayered (highs and lows all well encompassed for an oversaturated richness of sound) and immediate as presented here, without any distortion, imbalance, or other audio flaws to speak of.


--Two prior works by Odar, 2005's Quietsch (8 min.) and 2007's Under the Sun (60 min.). The former, a whimsical thrice-split-screen short about three kids who influence each other's environments in odd ways from their separate divided-screen compartments, is about this slick director's speed: It's aggressively whimsical in a way that might make even Terry Gilliam blush (Odar can't stop himself from abusing the surround sound for cutesy, tiresome, loud sonic prompts, but at least it fits much better with this material than in The Silence), but a clever enough demonstration of some real technical savvy and mastery -- a calling card/demonstration reel, as it was surely meant to be. Under the Sun, a coming-of-age tale about a preadolescent boy's crush on a slightly older girl cousin with whom he's passing the summer, suffers from the same disjunct between the modest, familiar material and copious, impressive but empty camera-choreography gestures (well-done homages to saliently fluid passages from Boogie Nights and Donnie Darko) and thickly laid-on '80s soundtrack (Depeche Mode, Tears for Fears) that he hasn't bothered to integrate with what's happening onscreen, a lack of any proportion rendering it all emotionally muffled and puzzlingly diffused. Like The Silence, it's convincing evidence that what Odar really wants to make is music videos or commercials, not sustained narrative features.

--Four two-and-a-half-minute interviews with principal cast members Ulrich Thomsen, Wotan Wilke Mohring, Katrin Sass, and Sebastian Blomberg, reflecting on their characters and what drew them to the script. 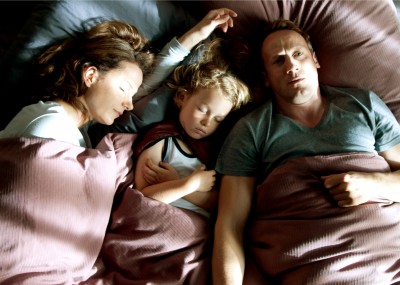 The Silence is the sort of contemporary, "arty," "transgressive" movie that, overloaded with aggressive stylistic manipulations, plays more like a long, slickly proficient commercial for itself than as the narrative feature it purports to be. As we follow along with what we sense really should be its troubling, haunting tale of pedophilic murder, tortured conscience, and bureaucratic expediency trumping investigational thoroughness and integrity, its every overbearing instance of slow-motion, shrieking or rumbling non-diegetic sound effects, and lacquered-on ominousness serves only to create an uncrossable divide between us and its modest, cliché reliant characters (mostly a waste of some very good actors) and dramatics (which, with better discernment, could have made for a solid-enough B-movie); the film falters, buckles, and falls under the weight of the relentlessly flourish-heavy, "ta-da!" attitude of the filmmaker, who seems more eager to show off all the amazing film vocabulary at his disposal than to find the right use of it for the particular murder-mystery story he's telling. It's an irresolubly conflicted film from start to finish, in almost complete denial about its narrative's very limited insight and imagination, and overcompensating with obnoxious, showy flash -- empty signals of a purported profundity and urgency that simply aren't there. Its looks are incongruously pristine and technically smooth, but even the most casual scrutiny will reveal The Silence to be a mess of plodding, superficial obviousness in its story and miscalculating pretension in its style. Skip It.