Garden of Words, The 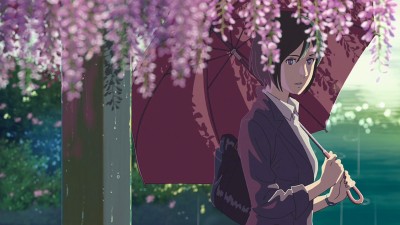 Note: images do not reflect the contents of The Garden of Words Blu Ray.

Don't get me wrong, I love anime, but there's a very real need for animation that doesn't hew to the samurai/sci-fi/fantasy/"geeky guy finding himself pursued by hot chick(s)" formulas. That's where The Garden of Words, a 2013 mini-feature from writer-director Makoto Shinkai, comes in. This visually breathtaking film - dealing with matters of the heart - serves as a sweet and understated respite from the usual stuff.

Actually, the story portrayed in The Garden of Words does somewhat adhere to the "geeky guy finding himself pursued by hot chick(s)" idea - it deals with what happens when an intelligent high school-age boy falls for an alluring older woman. That potentially uncomfortable subject is so sensitively and exquisitely done, however, that viewers are much more likely to be awe-inspired (like I was) than bored or squicked out. The protagonist is city dweller Takao, a sensitive lad from a broken home (dad is long gone; mom is constantly leaving her two sons in a lurch) who funnels his dreams into studying how shoes are made. While sketching in a shaded enclave at the verdant local park, a woman takes a seat nearby. Taking refuge from the spring showers, the two strike up an awkward conversation. Something about this flighty woman who adores chocolate intrigues Takao, and the two wind up meeting at the same spot on a regular basis. We learn that the woman, named Yukino, has emotional baggage of her own. Despite not revealing much of herself to Takao, the two become friends. Yukino encourages the boy's unconventional aspirations, while Takao gathers up the courage to design a custom-made pair of shoes for her. Just as their love is about to blossom, however, Yukino retreats along with the spring showers. She still figures heavily on Takao's mind - even when he finds out a shocking truth about her upon his return to school at the end of summer.

Makoto Shinkai has apparently been on the receiving end of a lot of complimentary comparisons with Hayao Miyazaki. Indeed, the lush imagery and touching story in The Garden of Words places it very much in the same vein as Studio Ghibli's output. Although Shinkai doesn't quite reach the awe-inspiring heights seen in most of Miyazaki's epics, the modest, human-scaled drama and expert craftsmanship seen here is on par with something like Ghibli's Whisper of the Heart (which Shinkai coincidentally name-checks on the blu ray commentary). The film sets its simple story of two people connecting against a delicately rendered urban landscape, one in which the daily grind of everyday life and the regular changing of the seasons is made to appear breathtakingly beautiful. This is accomplished with a combination of hand-drawn animation, rotoscoping and CGI effects (used on the rain sequences). Shinkai consistently sustains a dreamlike, otherworldly mood throughout - at least until the very end, when (no spoilers here) a fluffy and out-of-place pop song appears on the soundtrack. The song was a remake of a popular Japanese tune from the '80s, a fact that will be lost on most Americans.

In one of The Garden of Words' most memorable scenes, Takao sensually measures Yukino's feet for the shoes he's planning to make for her. Like the rest of the duo's changing relationship, it's handled tastefully and with a lot of respect for the characters. Given the potential weirdness of the older-woman-younger-man scenario, the sexual tension is handled rather chastely. Despite the decade or so age gap, the responsible Takao and yearning Yukino are emotionally about the same age. Their evolving from curious acquaintances to friends with a complex understanding between each other has the same gentle rhythm as the changing of the seasons. 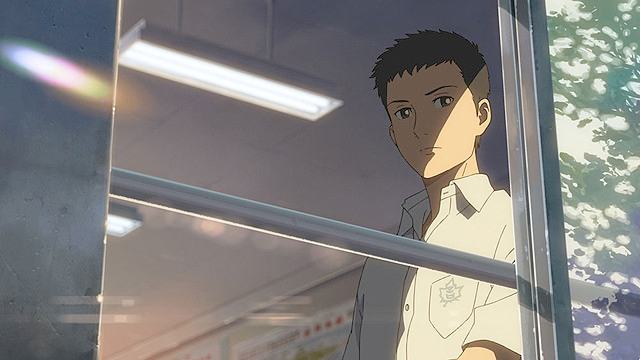 The gorgeous imagery throughout The Garden of Words has seemingly been transferred intact in its transition from digital file to Blu-Ray. In all departments, the 16x9 high-def picture looks fantastic - vivid colors, lush and deep dark shades, crystalline highlights. The only complaint might be that it makes most live-action films look anemic in comparison.

The soundtrack is also given a top-notch presentation, available the original Japanese 5.1 or a professionally done English language 5.1 dub. The mix is spacious, with clear dialogue in the central channel and carefully crafted atmospheric sound effects around the edges (especially noticeable during the rain shower sequences). Diasuke Kashiwa's lovely, contemplative musical score is also well-integrated with the rest of the soundtrack. Optional English subtitles are offered.

As if to make up for the feature's under-an-hour running time, there's a lot of supplementary material to keep one occupied:

Visually sumptuous anime The Garden of Words tells a simple, real-world story with a great sensitivity and attention to detail. In telling the tale of a high school boy who falls for an enigmatic older woman, director-writer Makoto Shinkai channels the more subtle, realistic Studio Ghibli output. Sentai Filmworks' Blu-Ray edition of the film boasts fantastic imagery and sound, along with a barrage of bonus content. Highly Recommended. 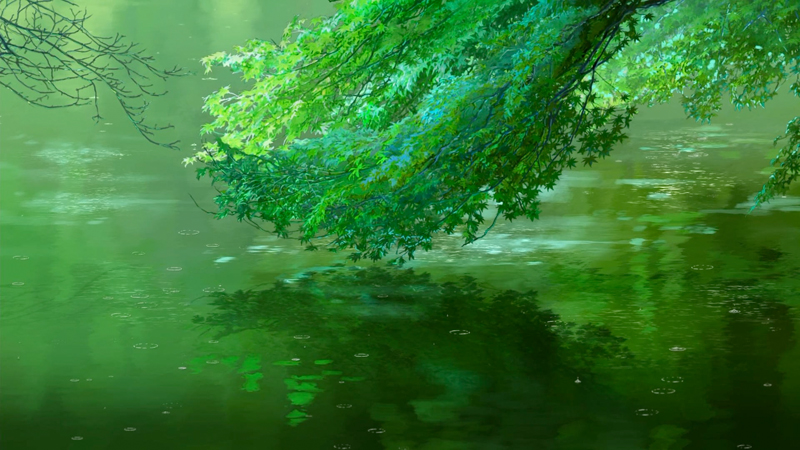 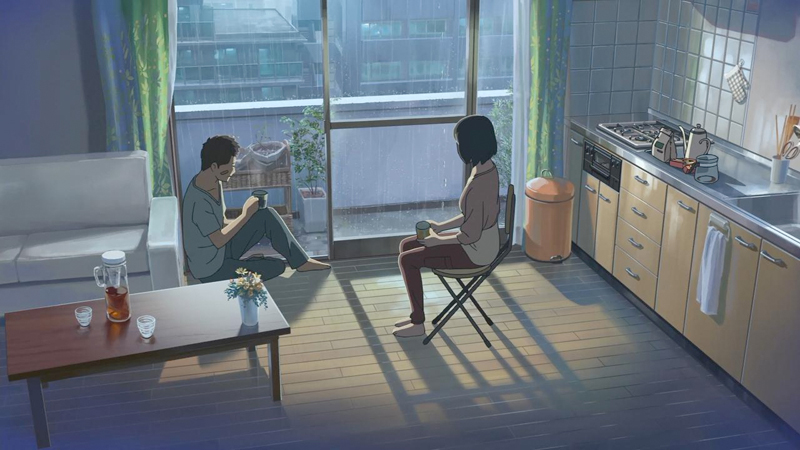 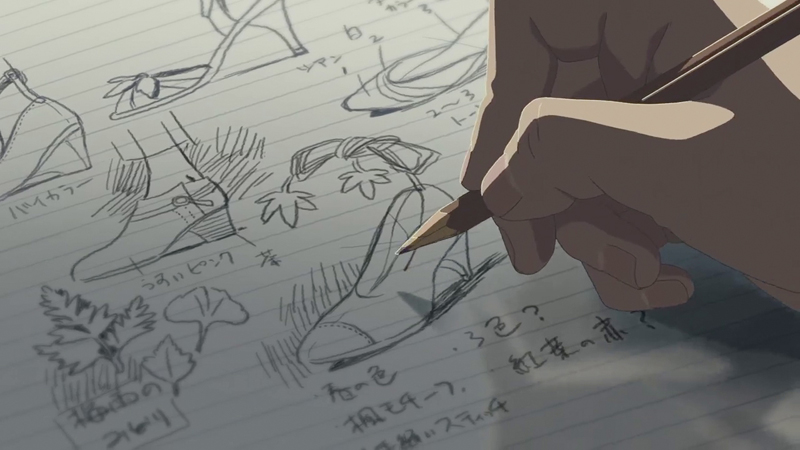 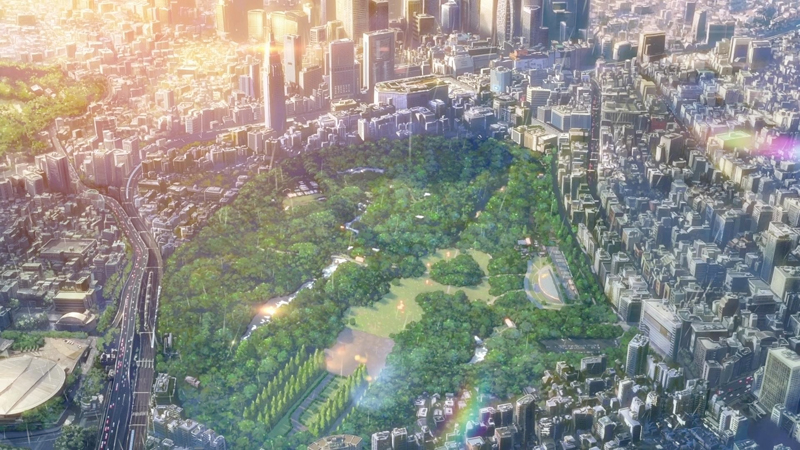