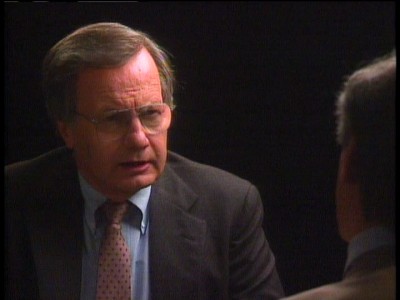 First broadcast in 1991 (in the wake of, among other things, the Rodney King beating and subsequent riots), Bill Moyers: Beyond Hate is one more in a series of Moyers' attempts to delve with appropriate, useful perspective and gravity into an issue to which there is no simple answer, but which must nevertheless be considered a matter of importance that deserves our serious attention. To a much further extent than his other programs on issues as wide-ranging as the highly problematic U.S. interventions in Latin America, the shameful crisis in our nation's health care, or the role of money in U.S. politics, however, Beyond Hate ventures into more disturbing, more philosophically and historically trenchant territory. As Moyers reminds us at the beginning of the program -- in his ever-calm, curious, gentle and genteel drawl, TV's classic Voice of Reason -- hatred between human individuals and groups has been an unshakeable disease since at least Cain and Abel, and one that's afflicted, in one form and to one degree or another, every human society, no matter how large or small, "advanced" or "primitive," theocratic or nominally secular. But the premise is something much richer -- and much more sticky, minus anything close to a pat or reassuring resolution -- than "you shouldn't hate; it leads to bad things"; Moyers assumes that his audience knows enough of the facts and is conscientious enough to already agree with some form of that self-evident and easily-voiced sentiment. Rather, he takes the tactic of reminding us just how easily anything but the most impossibly ideal circumstances give rise to hate between neighbors, ethnic groups, and religious/political factions; how hellishly bad the things led to by hatred can get; and then takes the next, forbidding but essential step, using the opportunity to confront us with the true, discouraging difficulty of trying to break what is so far a never-ending cycle in human history, one that has always prevented all of us, in all nations and cultures and all parts of the world, from being able to regard ourselves as meaningfully, un-hypocritically "civilized." 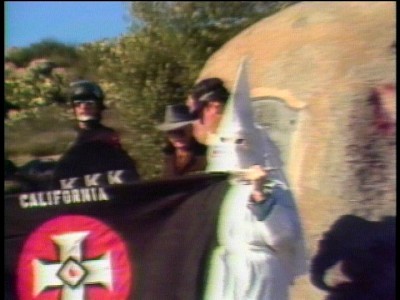 With such a substantive approach and such a difficult question on its mind, then, Beyond Hate doesn't get too bogged down in, let alone sensationalize, any one episode in humankind's long history of violent, wasteful hate. Rather, it takes some of the most salient, damning, destructive eruptions of that all-too-human emotion (the Holocaust, the perpetual conflicts in the Middle East, the United States' appallingly resilient anti-black racism, etc.) as especially ugly iceberg-tips emerging from some very deep, very murky waters from which we've all taken at least a sip. Through heart-rendingly blunt, honest interviews with first-hand experts on the subject such as Holocaust survivor Elie Wiesel, bereaved Northern Ireland peace activist Mairead Corrigan Maguire, Czech President/former Iron Curtain prisoner Vaclav Havel, and Medger Evers's widow Myrlie Evers-Williams, among many others -- as well as select, disturbing illustrations from some of the most troubling footage of dehumanizing hate-mongering from the Nazis to American racist Tom Metzger and his neo-Nazi skinheads to the U.S. government's own grotesquely caricaturing wartime anti-Asian and anti-German propaganda -- Moyers deliberately, rationally, and without any haste or rush to simplistic judgment traces the many faces hatred has taken on, in multiple different contexts and with varying rationalizations, all with uniformly awful consequences, before attempting to come to grips with the eternally unanswerable -- yet absolutely imperative to answer -- "why?" and "what possible solution(s) could there be?" 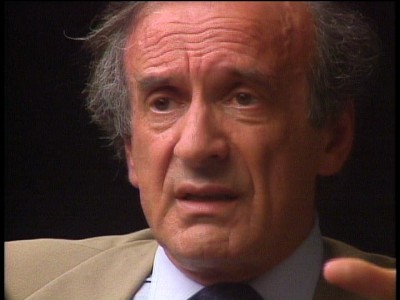 It's a question posed with ample food for thought, fuel for our own ponderings of what could ever be an adequate or effective response to a toxic problem that, as Moyers' interviews in conjunction with the program's truncated but well-chosen and -organized histories show, is as likely to infect those exposed to it as inspire them to combat it; when Holocaust survivor/Nobel laureate Elie Wiesel himself admits, with honest shame, that he believes he would have killed an SS officer out of vengeance if he'd had the chance, despite his long-pondered and hard-earned conviction that it's wrong and would solve nothing, the ethical, moral, and historical vortex -- the quicksand underlying all of our often too-easy certainties about our own peacefulness or freedom from vindictiveness or dehumanization -- is forced disturbingly to the fore. With victim after victim of hate acknowledging the suffering they've experienced and how difficult it is even for them to combat their own hatred and keep themselves from regarding certain others as "less than" human, the program never succumbs to simplistic platitudes, instead acknowledging the rising-above of hatred as grubby, complicated, often frustrating, and unceasing work even for those who've done the most in international public efforts for peace and understanding. Even as Moyers carefully concludes by exploring pathways that might potentially neutralize or transcend hate -- a camp devoted to peace in the U.S. at which Arabs and Israelis live side by side; former President Jimmy Carter's reminiscences of the famous Camp David peace-talks meeting between Israeli and Egyptian leaders that he facilitated; Wiesel's "Anatomy of Hate" conferences with experts and world leaders; mediators at a Brooklyn high school whose tensions have been thrust to the surface by a racist murder in the neighborhood -- there's no pat utopia in the offing here, just a much-needed, refreshingly complex and sincerely inquisitive and even-handed diversion of our attention to a pressing conundrum in which the entire human race is implicated in one way or another. 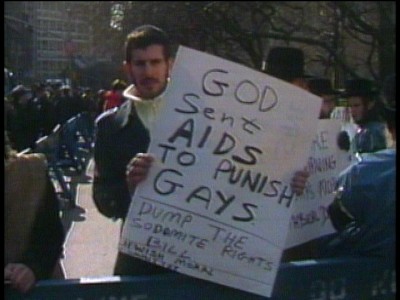 Like most of what Moyers has contributed to his medium, Beyond Hate is riveting and engaging without ever compromising itself in the name of "entertainment." It's an unsettling, deeply researched and deep-thinking, meticulously even-handed and unflinching grappling with one of the darkest, most intractable and insidious aspects of human nature that, in true Moyers fashion, with all his trademark earnestness and seriousness, fully accomplishes what so very little of our screeching, sycophantic TV "news" dares to do today: refuses to patronize us or ingratiate itself by grandstanding or stoking any partisan, self-flattering sense of self-righteous indignation on the audience's part, instead actually challenging us, asking us to acknowledge the very clear potential for hatred in ourselves as well as anyone else, and to face down an intimidating tangle of history and emotion in an effort to seriously accept and weigh our own responsibility and part in putting the brakes on its highly combustible cycle. Bill Moyers: Beyond Hate takes a long enough view that it continues to hold up as a sobering, enlightening, unabashedly informational and thought-provoking television experience, and will (unfortunately but undeniably) remain relevant, essential viewing -- for everyone willing to admit that hate is a universal human potentiality and problem, not just something affecting those we might consider the ignorant haters -- far into the foreseeable future. 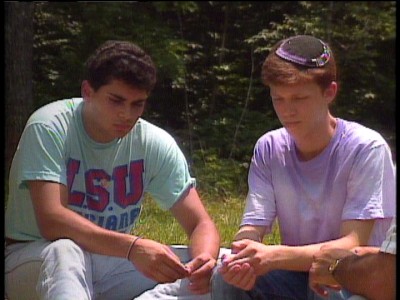 
The transfer of the program, retaining the original standard television broadcast aspect ratio of 1.33:1, is perfectly adequate for the rough, rather blurry (by today's standards) picture quality of 1991-era videotape; few, if any, flaws in the picture appear to be the result of any compression artifacts or mishandling of the materials in the transfer itself, and everything appears to look more or less the way it would have were one to have watched the program during its initial showing on PBS.


The Dolby Digital 2.0 stereo soundtrack (with optional English subtitles), again, reflects the highest audio quality available given the technical limitations of the period (which, when it comes to audio, are notably fewer than when it comes to the picture quality; though it doesn't "surround" or reach the deepest deeps or lowest lows the way current TV sound quality is expected to, all sound here is crisp, clear, precise, and immediate in a way completely sufficient to the program's aims).


--Facing Hate, an hour-long conversation between Moyers and Holocaust survivor/author/activist Elie Wiesel (heavily excerpted in the main program as well) that digs even deeper, more intensely, and more soberingly into the paradox -- the incomprehensibility of hate, the necessity of comprehending it if we're to move beyond it -- of the topic at hand.

--Onscreen-text biographies of some of the program's better-known interviewees, including Myrlie Evers-Williams and Chinese cultural revolution survivor Li Lu.

--A 10-page booklet featuring additional context in the form of thumbnail histories of, for example, Northern Ireland's "troubles" and the U.S.'s long African-American civil rights struggle, as well as a brief profile of the Southern Poverty Law Center and a compare/contrast of the different approaches to and understanding of "hate speech" in the U.S. and in Europe. 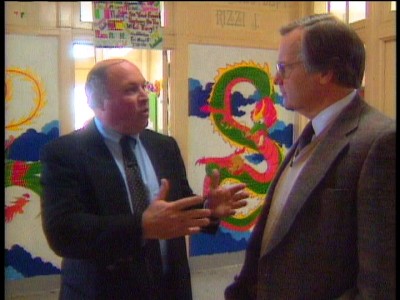 Another integral slice of what TV journalism can be at its finest (from a figure who now appears, in our cable-news age of Network-come-true-and-then-some, to be the medium's last truly thoughtful, patient, nonpartisan voice of reason), Bill Moyers: Beyond Hate is disturbing viewing, but never for a second gratuitously so; however well-organized, engaging, and accessible a bridge the program extends to its deep, challenging thoughts, it feels no need to condescend to or "entertain" us as it delves fearlessly into the darkest, coldest ethical/philosophical/historical waters of humankind's long history of hate and consequent violence. Unlike most of what passes for news on TV today, Bill Moyers: Beyond Hate is looking to challenge and expand our view, not flatter our assumptions of what we feel we've already figured out; thus it doesn't just lazily recap the horrors of history as something we've put behind us, but serves most pointedly, as its overarching purpose, to remind us that all those things -- systematic slavery, oppression, genocide; everyday racism, xenophobia, and homophobia, etc., etc.-- are continuums of a human failing that encompasses the here and now, and us, too, a dangerous weakness of human nature that continues to be our responsibility to address for as long as it menaces us, both from within (if we're honest) as well as from outside in the larger, war-torn world. If the content of the program is hardly reassuring, though, there is one comfort it provides, one fear it puts to rest: If you've ever bemoaned how useless the tube has become as a meaningful window onto the wider world and a knowledge and understanding of others' experiences, Moyers' unfailingly calm but persistent way of inspiring us to ponder something discomfiting and complex is an excellent reminder that "responsible television," however rare and unfashionable it might become, isn't always an oxymoron. Highly Recommended.