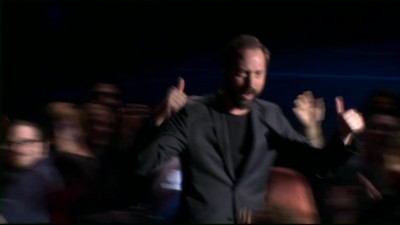 For me, there's a fine line for immature humor that separates being actually funny from just being stupid and annoying. Although Tom Green walks that line pretty finely at times, I usually place him on the side of funny. In fact, I'm one of the few people who actually "got" his 2001 movie Freddy Got Fingered . On the other hand, in Road Trip where I first saw him, I found his part largely unnecessary and just slightly amusing. At least from what I can see, Tom Green is aware that what he does can be perceived as "stupid" by many people, and that awareness is what makes such humor work for me, as opposed to other comedians (who I won't name here) who are just simply not funny at all and don't seem aware of their own stupidity.

"Tom Green Live" presents an hourlong live performance at Boston's Wilbur Theater, a nice-looking older venue. Compared to things he's done previously, Tom's stand-up act is rather low-key, working onstage with just himself, a microphone and that comedy-act staple, a stool. One topic he spends a lot of time on is current communication technology, commenting on how many people seem so obsessed with social media and text messaging (seeing people in public engrossed in their cell phones is something that annoys me highly, so I love seeing this brought out in the open by someone who is likely to be listened to.) At one point he starts going through the motions of someone obsessively sending text messages on a cell phone, repeatedly saying "happy buttons" in a high-pitched voice that he's used many times before. He comments on how years ago people would be paranoid about the CIA spying on them, but now these same people are posting their personal information online and now the CIA just has to send them a "friend request" rather than spy on them. He also brings up a favorite topic of internet discussion, teachers sending naked pictures of themselves to their students, and acts out a comparison of how this is done with current technology versus how a teacher in 1975 would have had to do it, what with actually having to get the film developed and mailing the resulting picture instead of just hitting a few buttons. Another technological insight discussed is how easy it is to access pornography now, compared to when he was younger as he tells a funny story about how he found a Penthouse magazine out in the woods thinking it was the greatest thing ever.

Tom also reflects on getting old in general (a bit discomforting given that he's only about a year older than I am, thus I'm also getting old), remarking that time goes by faster as you get older, and saying "you know you're getting old when you remember phones before they had buttons." He allows himself to go into a somewhat manic state when he talks about going out to skateparks just to yell at kids, saying "I'm an adult, this is my turn now!" after remembering how old men would say the same things to him when he was younger. He does a bit of reminiscing on his prior accomplishments, throwing out a few lines from Freddy Got Fingered to the audience's delight. 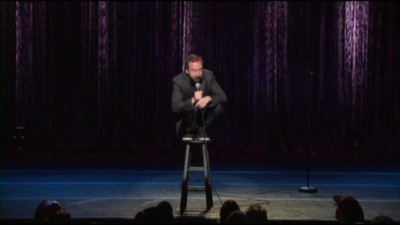 "Tom Green Live" was shot on video in 16x9, at 24 frames per second. The overall picture quality is rather poor, with aliasing (particularly on Tom's microphone) and jagged edges. This extends to the closing logos at the end of the program, making me wonder if there was some issue with the master used for this DVD rather than the whole look of it being a "creative decision".

The audio fares much better than the picture. Although it's only a 2-channel mix in Dolby Digital, it sounds quite good in Pro-Logic II, with sounds from the audience spread well into the front left and right channels and the surrounds, with Tom's voice anchored in the center.

There are no subtitles on the disc, but it does include closed captions which require an analog 480i output to access. Using my Oppo BDP-93's component output, the captions appeared garbled and unreadable with many letters dropped, but appeared normal using another player.

The disc includes a 28-minute extra called "History of the Tom Green Show" although it also covers Tom's foray into the live performance tour featured here. It begins with clips from his public access cable show, although the frame rate is processed in 24 frames per second and the faces of almost everyone other than Tom appearing on camera are blurred presumably for legal reasons. I haven't seen very much of this material before but would like to check out more of it now- Tom describes it as being like "YouTube before the internet existed." He then expresses his thankfulness for MTV picking up his show and giving it a wider audience, which was then halted after being diagnosed with (and ultimately surviving) cancer. After that experience, he tells us he decided to try a stand-up comedy tour as it was something he had always wanted to do, and we see a few clips from his other shows prior to the one featured here. 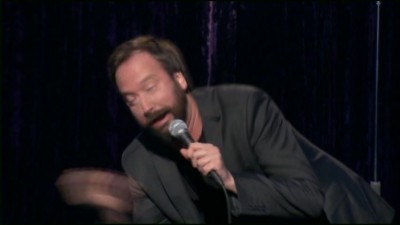 While seeing Tom Green doing a more restrained performance took some getting used to, he ultimately pulls it off and had me laughing most of the time, earning a lot of my respect in particular for talking about how ridiculous the use of "social technology" has become. While some of his old mannerisms still show through, they might be restrained enough this time for those who found them annoying beforehand, but longtime fans may be disappointed in the same way. Either way, this show is worth checking out and I'll look forward to seeing what he does next.