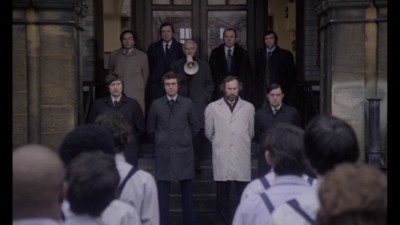 The great British director Alan Clarke was an incidental, better-late-than-never discovery for this reviewer: I unfortunately had never heard of him until 2003, when Gus Van Sant's Elephant -- the languorously and objectively-told story of a horrific school shooting -- was released, and Van Sant, in interviews published around that time, attributed the cryptic title of his film (a reference to a taboo-subject "elephant in the room" that recent events show is still very much with us) to Clarke's use of the same title for a 1989 TV film, whose own version of an elephant in the room was the ever-escalating, violent "troubles" in Northern Ireland. A new look at an earlier Clarke film now being released to DVD, 1979's Scum, reveals that the violence in Belfast wasn't the first long-trunked mammal in the British Isles' room that Clarke had set his sights on, and nor was Elephant his only work to display the formally rigorous, fluid, unblinkingly observant style that was so clear and primary an influence on Van Sant's film. Scum caused a great deal of controversy in its time; the theatrical film was a nose-thumbing to the BBC, which had banned a separate but near-identical version also made by Clarke (from the same initial script by TV veteran Roy Minton), for broadcast two years earlier, and as an unsparing, highly critical exposÃ© of the systematic treatment of the UK's juvenile delinquents, it was intentionally inflammatory. But although Kino's new North American re-distribution of the restored film is a gift, their newly-created packaging trumpeting it as a quasi-exploitative "cult classic" is a bit disingenuous; Scum's cool formalism and narrative symmetries actually put it more in the tough but thought-provoking league of something like A Clockwork Orange, and in certain respects it's even more rigorous and clear-headed in its probing of governmental mishandling of the youth-criminal problem than Kubrick's more easily (and surely more often) misunderstood film. 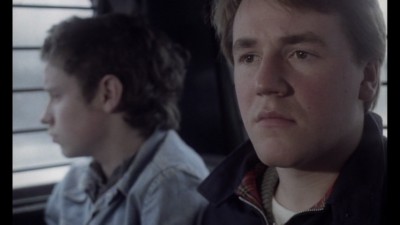 The pretext for Clarke's and Minton's bringing us into the borstals' progressive circles of hell is the transfer of Carlin (Ray Winstone, Hugo's Uncle Claude, star of Quadrophenia, and a longstanding British Method Actor of the Tim Roth school), a miscreant with a reputation for elbowing his way to the top of the hierarchy in whatever group or toughs the system places him among. It's because Carlin had become too dominant at his old delinquent hall that he's being transferred to the particular institution that provides the film's sole location, where he will have to start at the bottom. On his ruthlessly violent way back up, Carlin meets, among other various specimens, the more subtly and effectively deviant Archer (Mick Ford), who uses ostensible vegetarianism and planned conversion to Islam to get under the administration's skin; the too-innocent and vulnerable Davis (Julian Firth), who as the weakest comes in for the most unspeakable violation and refusal of official sympathy; and Toyne (Herbert Norville), a black inmate driven insane by the literally institutionalized racism, not in the more jeering or violent forms it takes, but when the infantilizing, condescending attitude of the hypocritical borstal "matron"/counselor (Jo Kendall) reveals itself as she sardonically assumes a letter informing him about the death of his wife merely regards the passing of a family pet. 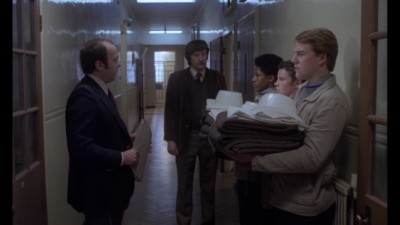 It's only on the surface, however, that Clarke and Minton concern themselves with the rise to power of Carlin the charismatic, violent rebel. The narrative's real purpose is to dissect all the diseased components of the juvenile-justice system, where the corrosive aura of dread and violence is circulated from the head/control center throughout the entire organism (the prim claim of the strict, religious, deluded old Governor/headmaster (Peter Howell) that "there is no violence here" is the film's only laugh-out-loud line, coming as it does after we've seen the brutal physical and emotional violence inflicted by all the administrators and guards, and actively encouraged between the boys, as in one salient scene in which a race-baiting coach whips a tense dodgeball game into a black-vs.-white free-for-all fistfight). Through the film's pressure-cooker structure, we see unmistakably, in unrelentingly realist (though not exactly "documentary") terms, how the system, far from rehabilitating or even effectively punishing the boys, is a self-perpetuating monster that breeds, through regimented racism, humiliation, sadism, and nonstop punitive violence, much worse than the misguided youths that it's pulled into its inescapable vortex. The toughest, like Carlin, are in cahoots with the equally amoral and unethical housemasters and guards; it's only by chance that one group of thugs is the prisoner and the others are the enforcers, and punishment and neglect are generously but very carefully meted out in a seemingly indestructible pecking order that masterfully manipulates, divides, and conquers everyone within it, and whose every brutal step is followed in detail by Clarke's camera; even the exhilarating final eruption of violence by the youths against their guards, a unified riot after the injustice becomes too much, is not the release it might seem, but just another excuse for the corrupt arms of the law o clamp the lid down even more tightly on their ultimately helpless charges (victims? you will consider that possibility as you witness the film's events) in the film's razor-sharp, galvanizing conclusion. 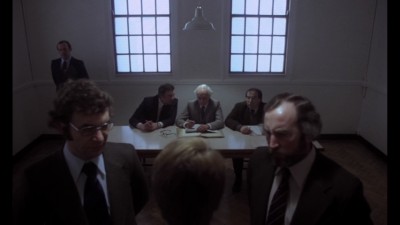 Though he used it somewhat differently, to less scathing and more openly humanistic ends, the aesthetic strategy Van Sant was inspired to borrow from Clarke (and it is inspiring) is one of cool, unblinking apparent objectivity -- a very precise but unemphatic way of framing and moving the camera that, while far from the rawness or spontaneity of real documentary footage, makes everything seem inevitable, claustrophobic (which, as a powerful paradox, creates an urgency to intervene in the nightmare playing out onscreen, even though we can't). The borstal is an isolated vacuum, a cage/maze-like world unto itself, and Clarke (along with cinematographer Phil Meheux) brilliantly exploit that through regimented, symmetrical compositions; ice-cold, fluorescent-quality lighting inside and out (the film takes place in the winter) that seems perfectly natural in this context; and impressively choreographed, unbroken takes that let us see, feel, and experience not just the real-time immediacy of actions playing out in their entirety, but the awful possibilities and circumscribed physical limitations of this circumscribed space. Its vintage, subject matter, style, and even intentions practically beg the aforementioned comparison to A Clockwork Orange, but Scum is just as much of a contrast/opposite number; if Scum is less dazzling -- more stylish than stylized -- than Kubrick's great provocation, it also runs less risk of being mistaken for snark or facileness. Its conclusion, an angering, literally bruised and bloodied, disheartened defeat, lacks any note of triumphalism and lets the onus rest squarely on us, and if Kubrick's film openly codes itself as allegory, Scum is perhaps more relevant and applicable on more levels, equally effective as a cry of rage against this particular institution and an astute contemplation of the insidiousness of institutions -- i.e., the organization of societal power relations -- in general; its implacable surface never gives the game away, but a great deal of the film's continued power to disturb and awaken comes from how recognizable, from "normal" society, is the organization and hierarchy of the abysmal borstal. Taken as that kind of allegory, one very possible but never overdetermined reading, it's supremely restrained and subtle. Clarke doesn't have to sledgehammer it home or have anyone in the film say it, because what he so skillfully shows us says it all: We meet and get to know the enemy, the various "monsters," in Scum -- the enraged, impotent, and/or corruptible delinquent underlings, the pettily but brutally sadistic overlords, and the deluded/detached masters of it all -- and the way they are, the way they've hinged their relations on aggression, violent conquest, mutual suspicion/exclusion, and punitive hierarchy, bears a chilling resemblance to us. 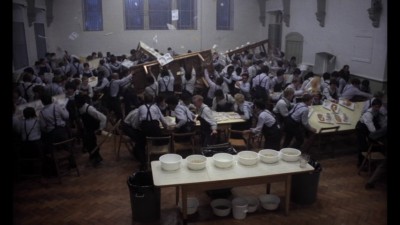 
The transfer, made from a 2012 restoration and presenting the film at its original theatrical aspect ratio of 1.66:1, gets high marks: The film's particular, unusually cool qualities of light and color are rendered solidly, vividly, and vibrantly; the lion's share of celluloid-like texture and grain has been left intact for the appropriately cinematic look; and there's virtually nothing in the way of aliasing, edge enhancement, or other compression artifacts.


With an option of either Dolby Digital 2.0 stereo or Dolby Digital 5.1 surround tracks (either one equally high in quality, though the 2.0 sounds more natural, basically double-channeling the film's original mono sound), the film's sound as presented here is entirely up to snuff; everything from dialogue to the din of rioting to the slamming of those borstal doors is quite clear, resonant, and multi-layered, with no distortion, imbalance, or other audio flaws noted.


--Feature audio commentary with star Ray Winstone, in which the actor is, as one might expect, very affable and down-to-earth (to the point of being blunt, though not unkind, about the experience of working with his late director/mentor, Alan Clarke, not once but two times on the two different versions of Scum. Equal credit should go to interviewer/critic Nigel Floyd, who helps keep the occasionally unfocused Winstone on track as the film goes by.

--"Cast memories" (16 min.), in which actors Phil Daniels, David Thelful (who only appeared in the banned 1977 TV version), Mick Ford (who played Thelful's character from '77 in the '79 version seen here), and Julian Firth offer their recollections of making Scum and their opinions about its effectiveness as art and as social commentary.

--A handful of more recent interviews with various people involved in the film (totalling approximately 45 min.), including a conversation between producer Clive Parsons and writer Roy Minton, evidently from a 1999 home-video release, as well as separate 2005 interviews with Parsons (along with co-producer Davina Belling), Minton, and executive producer Don Boyd. Together, these reminiscences offer a prismatic (and occasionally even contradictory, as different participants remember events in different ways) view of the unusual path Scum took from TV to the censors to the big screen, through its production, reception, and continuing relevance.

--Both the censored and uncensored original theatrical trailers for the film, strange, forebodingly-narrated curiosities understandably but disproportionately dependent upon the "scandal" of Scum's outright banning in its TV version and its X rating as a remade theatrical release. 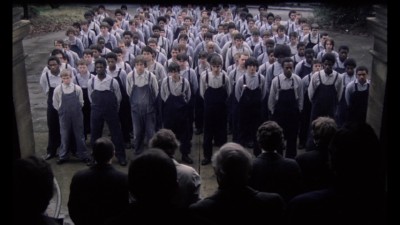 A poker-faced, unblinking look at Britain's system of borstals (juvenile-delinquent residences for criminal boys), Alan Clarke's Scum -- a 1979 feature remade after Clarke's near-identical TV version had been banned two years earlier -- must have been a mighty effective, inflammatory act of social protest in its day: Its depiction of the dehumanizing, crime-breeding, violent hothouse of the borstals, glimpsed as we follow the stint served by the tough, ambitious transfer Carlin (Ray Winstone), brutal, ugly, and damning. But the film's impact hasn't been lessened by temporal distance from its immediate social context; Clarke's formal rigor and screenwriter Roy Minton's laser-focused narrative -- a veritable encyclopedia of the humiliation, pecking-order hierarchy, and amorality of the juvenile detention system -- create a sort of vacuum-world, a closed-off arena that's both accurate/realistic and a ripe opportunity to study the nature of human institutions and social organization themselves in stark, microcosmic, deeply disturbing terms. The film is, effectively, a cool, unsparing mirror held up by the filmmakers, showing us something all too troublingly recognizable, for a picture that, while it subtly affects us via its stoic, utterly unsentimental empathy, also chills in a way that rivals any horror movie. Highly Recommended.