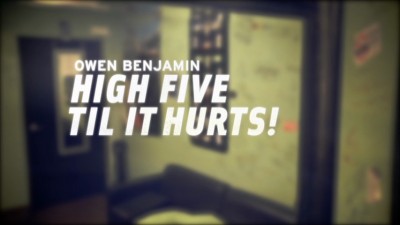 
The Show
Depending on your tastes, Owen Benjamin is best known for small roles in Adam Sandler-related productions, one of his web series or as a guy who dated Christina Ricci, resulting in ridiculous pictures of this tiny woman walking while holding hands with a giant. Together, they seem to have added up to an hour special on Comedy Central, recorded at Austin, TX' Moody Theater, as is required by law of all stand-up specials. Benjamin is a bit of throw-back in a world dominated by alt-comics, sticking to traditional topics, like relationships, pets, road rage and sleeping. Even his presentation, with his plain suit and moderated speaking voice, is simple and standard. He's a competant stand-up, but he doesn't stand out.

Sometimes he breaks into more interesting areas, such as when he talks about his smart-ass nature, and how it gets him in trouble, especially with the cops (thanks to a logic-based argument against a common law), or when he smartly compares men and women to capitalism and communism, but he's soon back to very standard bits, like the nature of women's magazines articles and how dogs love to go outside. Even more egregious is the way he approaches this material with a "bro" mentality, with lots of gay jokes and simple lines about sex and multiple sets of genitalia (not to mention a healthy number of actual "bro"s throughout the special. 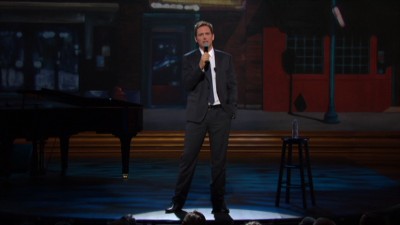 Things get better down the stretch, where he sits down behind the piano keys and shows off an impressive musical ability. which he winds around some of the same themes he covered earlier, and puts on more of a musical focus, like the very-topical lack of intelligibility of Eddie Vedder's lyrics and the repetitive nature of hip-hop beats. It's not all great, as his text-message song is basically an extension of a previous bit with added lewdity. That's somewhat the case for most of the songs, which are either about relationships or are dirty.

The way the show ends, as Benjamin forces the audience to take part in a weird attempt at wish fulfillment, is very odd and off-putting. If it was from an act like Zack Galafinakis, Reggie Watts or Kristen Schaal, comedians who manipulate the stand-up form and subvert it, it would absolutely work as a meta joke, but after nearly an hour of ordinary stand-up, this is just an weird way to end things, and helps cement the special's awkwardness. 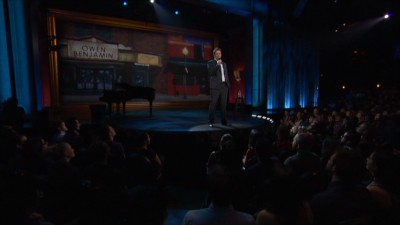 The Discs
High Five Til It Hurts comes in a two-disc set, with a CD and a DVD, which are packed in a CD-size three-panel digipack featuring pictures of the stage and Benjamin high-fiving himself. The DVD features a static anamorphic widescreen menu with options to play the special, select scenes, check out the extras and adjust the set-up. There are no audio options, but subtitles are available in English SDH.

The Quality
The anamorphic widescreen transfer offered for this show does a good job with the rather dark stage behind Benjamin, who's wearing a dark suit, while maintaining his skintone well.The image is sufficiently sharp. with good fine detail for most of the angles, while the black levels keep Benjamin from getting lost in the shadows. There are no noticeable issues with digital compression.

The Dolby Digital 2.0 track provided here does a fine job of delivering Benjamin's voice, and keeping it clearly separated from the audience. Though there's nothing dynamic about the mix, everything is presented well and without distortion..

The Extras
The extras kick off with the Comedy Central standard of including the comic's previous CC work, and here you get Benjamin's appearance on Comedy Central Presents... (21:03). It's a bit of a trial-size version of the main special, with more talk about things like relationships, smoking weed and drunken urination, along with a small musical section at the end, which features a bit that was repeated in a longer form in the special.

Also available are two online segments with jokes from the road (a tunnel in Tennassee (3:13) and the Middle East (1:43).) While the second piece is Twitter-focused, the first is noteable mainly for it being recorded in vertical orientation on a phone, a crime that should be punishable by being sent to referee futbol in Brasil. 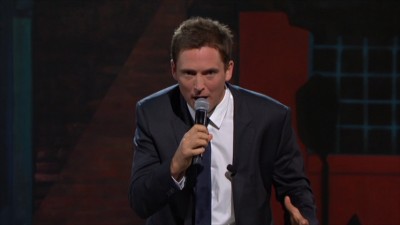 The Bottom Line
Though he was recognizable, I didn't have a great base of knowledge about Benjamin coming in to this special, and leaving, the impression is, he's a better musician than a stand-up (which is honesty not ewntirely a slight.) His act is very traditional, and only a few lines here and there stood out, outside of the music. The presentation is good though, and there are a few extras to check out if you enjoy his comedy.