Having been to Portland three years ago for an albeit brief trip, it was a place I feel in serious like with, and when the opportunity presented itself to go again last year, I encouraged my wife to come with me, which she did and thus, another person developing a crush on the Cascadian bridge town (Note: Last three words may not be entirely accurate). Nevertheless, Portlandia aired before the second trip my wife went on, and her response after coming back was more or less that the show seems so click all the more for her now after spending some time there. 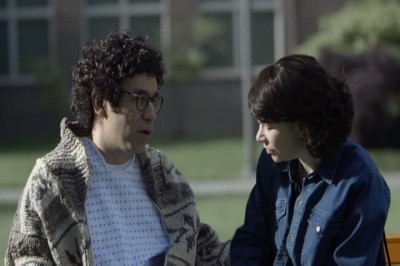 The show, now in its third season, stars recent Saturday Night Live alumnus Fred Armisen and Sleater-Kinney/Wild Flag singer and guitarist Carrie Brownstein. Together with Jonathan Krisel, the trio created the Portland-based show which with SNL creator/guru Lorne Michaels, the show's airing on the IFC Channel in the U.S. has carved out a following and some critical praise to boot, earning a Peabody Award at one point. As far as the show's structure, some of the sketches are one-offs, but others include recurring characters in and around the Rose City. Armisen and Brownstein inhabit those characters and individually flip genders when it is called for, such as Armisen playing a woman who co-owns a feminist book store with Brownstein as the duo Toni and Candace, or when Brownstein plays the mustachioed biker "Lance" to Armisen's "Nina". They even play characters named Fred and Carrie even though they are not entirely Fred and Carrie. They juggle the various characters adeptly and possess a whole lot of genuine chemistry through the variety. What is particularly impressing is just how well Brownstein is able to hold her own with Armisen and others. Many of the scenes have some sort of improvisation and Brownstein hangs in there very well, and even throws in wrinkles that perhaps one could not have anticipated. The work the duo does over the course of the show is fascinating to see.

They get their fair share of help in guest appearances, some of which are let's face it, either for the novelty or for a superficial story arc. 1990s MTV personalities Kurt Loder, Tabitha Soren and Matt Pinfield appear early in the season as part of a plan to "Take Back MTV" in what is a decent episode, but worth it to see that yes, Soren's hair is redder than ever. And the ‘90s band No Doubt appears as themselves also. But the appearances by actors who are helping to move the mythology of the show's characters along, occasionally in multiple episodes, are where the entertaining stuff is. Perhaps the most visible guest star is Kyle MacLachlan (Twin Peaks), who plays the Mayor of Portland and periodically enlists Fred and Carrie for several public relations tasks. One of those tasks happens to be to woo citizens from neighboring Seattle to Portland to show them what life is like. So they travel, much like Mormon missionaries, and manage to persuade Alexandra (Chloe Sevigny, Big Love) to come to Portland, where she subsequently moves in and falls in love with Fred and Carrie separately in a funny arc.

There are moments where some of the comedy falls a little flat. Notably for me, the recurring one where Armisen and Brownstein (among others) voice stop motion rats in Portland not only feels a little like overreaching, but a rip-off of Fantastic Mr. Fox. And past the aforementioned guest appearances, the rest are a little hit and miss. George Wendt is solid as the newspaper reporter, and Bill Hader is great in the show's finale. However, Roseanne Barr and Juliette Lewis in separate episodes, leaves the fewer with a recognition glimpse of ‘Hey!' and little else, feeling like casting for casting's sake. 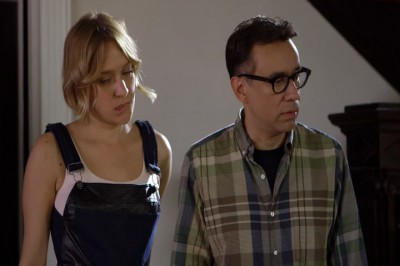 Some of the eccentricities, nay, quirkiness of Portlandia may be off-putting to some, but the show overcomes this with relative ease, juggling various actual plotlines and standalone sketches easily. Then one has the guest star list, which is eccentric enough, nay Portland enough, that they draw the viewer into the core that Armisen and Brownstein are carving out, a core that proves to be funny and charming. It helps to visit Portland for some of the smaller subtleties to click, but it does not hurt if you do not, as the show remains delightful as it plugs along into the upcoming Season Four.


Season Three's ten-episode run (and the Winter Special) is spread over two discs, all are presented in 1.78:1 widescreen, with the results being generally solid. The city's greens and landscapes are given ample justice, and are replicated naturally without saturation problems. There is nary a hint of edge enhancement, and haloing is present though marginal. Source material is clean as a whistle and one can spot some film grain during viewing to boot. While folks will flock to and enjoy the Blu-ray, the standard definition discs are not shabby.


Two-channel Dolby Stereo for everything, which is both a minor disappointment (because most current shows these days include a six-channel surround one) and an easily understandable choice (because the show is somewhat low-key and dialogue-driven). But the show still sounds good, and the listening experience gets a fairly robust soundstage, with even a hint of subwoofer engagement. The show sounds clean, dynamic and even on a front-forward track, sounds good.


The extras are all on Disc Two, starting with two deleted scenes (6:03) that are slightly long, but nevertheless have their chuckles. "Portland Tours" is a series of nine featurettes (24:43) hosted by Kumail Nanjani, who appears in various roles through the season. Kumail covers the places in and out of the Portland city limits, some of which are apparent inspiration for the show (like the feminist bookstore) and other points of interest for potential tourists. The last one with Voodoo Doughnuts might be the best of the bunch, or at least the one that helps testify to the ‘Keep Portland Weird' that is seen in the opening credits. They are all quite enjoyable and funny. As a special note, the all cardboard slim packaging is a smart thoughtful note for the consumer.


A great part about Portlandia is that if one were not up to speed on the episodes, the characters and stories are constructed as such that ramping up on previous episodes is not necessary; you can jump in and out of their lives as you please. With subpar bonus materials compared to previous seasons though (to be fair, the Portland Tours are hilarious and worth finding), it is hard to give the set a warmly embraced ‘Buy' recommendation. The season is very much worth seeing regardless.