I think Brian Posehn is in the position of people knowing more about what he looks like than what he does. And to be fair, seeing a guy who is about six foot four, with a virtually nonexistent hairline and ample beard, he takes up a lot of space, as one who has walked behind him can attest. But Posehn has been doing comedy in various forms for two decades now, starting with the HBO series Mr. Show with Bob Odenkirk and David Cross. Through all that time, he has not done a stand-up special that I know of. Thankfully, The Fartist rectifies that.

Recorded in the summer of 2012 at the Neptune Theater in Seattle, the hour-long set touches on a variety of topics near and dear to Posehn's heart. A self-identifying geek, thinks like Star Wars are among those for obvious reasons, but experiences closer to Posehn's heart are also told, like farts for instance. He relates a funny story about farting near Christian Slater and the subsequent reaction from him. In another story, he talks about how he used to smoke marijuana with attendees of his standup shows until he stopped, but has a great story about a fan, some weed and a glass eye that is hilarious to watch and listen to. 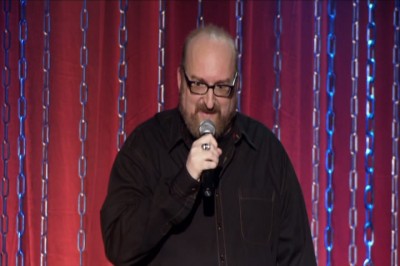 There seems to be an overarching theme lying with many of Posehn's jokes, and it is getting older. He talks about how his body is slowly degrading in front of him, his wife and young son, and protecting his son not only from some of Dad's jokes but Dad's hulking frame. He talks about a small level of distrust that his wife may have in him becoming unfaithful and perhaps cheating on him, when he says essentially that if anyone wants to be with him after seeing him naked for the first time they deserve some form of brownie points, but secondly he loves his wife and would not expose her to such a treatment. It does not stop him though from talking about the proper level of tip for a stripper, along with what kind of stripper he seeks out when he gets to one of those spots. In some of the jokes and stories, I found myself drawing a minor correlation to Bill Cosby with Posehn's yarns, in that guy who loved metal music and smoking weed in his 20s still has the general persona in his 40s, minus the pulled tubes.

There are a couple of moments that tend to run a little long or to moments of non-laughter, but in The Fartist, Posehn does what he has continued to do since the days of grunge and thrash. He makes people laugh, he does it pretty well and he will continue to do so for as long as he is able.


The Fartist is presented in 1.78:1 anamorphic widescreen, with the results being fine. There are some moments of crushing during the wider shots of the concert hall, but some of the sweat running down Posehn's face is noticeable during the show (image detail!). The image appears to have some film grain present during viewing and there are no post-production tweaks that have been done; Posehn is free of edge enhancement or haloing. Pretty much what was expected for the disc.


Two-channel Dolby stereo for the special, which is not much of a surprise. The dialogue sounds solid and even on a stereo audio track, occasional crowd reactions are easily detectable in the soundstage during listening. There is not much to really be blown away by on the track, but it does an adequate job when called upon.


Brian Posehn has been bringing the funny for some time now, and in The Fartist, what might be the first part of material that he can call his own, the viewer can expect a set that is funnier than expected, and leaves you wanting more. Technically the disc is decent though the lack of extras is a mild yet forgivable bummer. But if you either have been waiting for Posehn to put out a stand-up special or are looking for some good comedy to munch on, this is a solid recommendation.