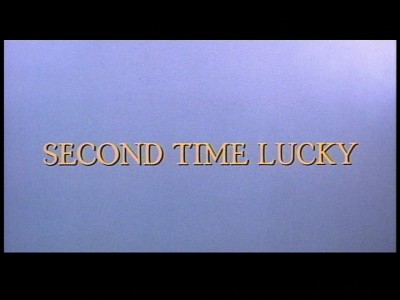 
The Film
If you're someone who grew up in the ‘80s and had a somewhat unusual personality, there's a good chance you had fallen in love with Monique Junot, the French foreign exchange student that Lane Myer won over in the suicide-comedy Better Off Dead. That's partially because you fell for Diane Franklin, the girl with the ringlet curls who gave Monique her adorable French accent and who broke your heart (and Gary's) in The Last American Virgin. There was just something about her that was irresistible, whether she played a princess in Bill & Ted's Excellent Adventure or even her small part in another Savage Steve Holland film, How I Got Into College. But the one film many of her fans have not seen, largely due to the lack of an American theatrical release, is Second Time Lucky, an odd mix of historical anthology and religious epic directed by Academy Award-nominee Michael Anderson (Around the World in 80 Days, Logan's Run.)

The story here is a doozy, as God (Oscar nominee Robert Morley) makes a bet with the Devil (Robert Helpmann, Patrick): he will give man a second chance to see what would happen if Adam didn't eat the apple in the Garden of Eden. The competition takes place over several eras, including Biblical times, the Roman empire, World War I, the late ‘20s in the U.S. and the ‘80s punk-rock scene, reconnecting the same pair, Franklin and Roger Wilson (Porky's), over and over to see whether love or sin would win. While the Devil and his fey assistant actively work to sabotage man, God has sent the archangel Gabriel (sketch comic Jon Gadsby) to guide man, but not interfere. Thus sets off a series of segments featuring the two characters throughout history, with Franklin portraying the temptress to Wilson's pure soul. 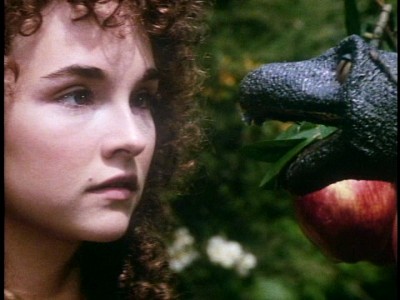 Though the cosmic framework is worthy of some campy laughs (God is basically Superman's dad, complete with a giant G on his chest, while the Devil's sidekick is a heavier Paul Lynde) the stories are hit or miss, sometimes going for silly fun, before shifting to over-the-top drama. Though some scenes, like the one in the late ‘20s where Franklin gets to cut loose as a heavily-accented flapper,are just plain fun, most of the others fall into a formula where the sets, costumes and voices are the main differentiator, so it's mostly just passing time until the next round of the challenge. On the plus side, there's some quality production value to each of the settings (at least on par with History of the World Part I) and the performances are not half-bad. None of it comes together in the end though, as it's hard to care about the core concept, which means very little to the film. It's just five mostly disconnected tales starring the same actors.

The thing is, one of those actors is Franklin, who spends a large portion of the film in some state of undress, including being fully nude for the entire first segment between Adam and Eve. It would be an utter lie to say that this is not the film's biggest draw, because it certainly is. This takes nothing away from Franklin's ability, as her body is certainly attractive, but her ability to switch from innocent to seductive with just a slight change in her facial expression is even more impressive. But the filmmakers knew where their bread was buttered, finding any reason to expose her flesh, including one of the more memorable firing squads in film history, even if her best performance sees her mostly keep her clothes on, playing a gangster's moll to the hilt. If you don't see the appeal in seeing Franklin in the buff though, this film won't do a lot for you. 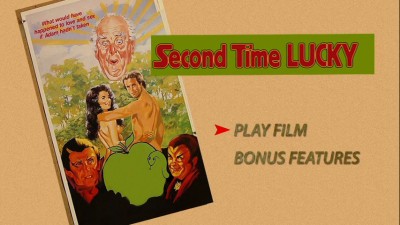 The DVD
(Note: We received a screener copy, so we can't comment on how the disc is packaged.) A one-disc release, this DVD features a static anamorphic menu with an option to play the film, and check out the extras. There are no audio options, no subtitles and no closed captioning.

The Quality
Delivered with a full-frame transfer, this movie looks its age, with a better-than-VHS level of visual quality, with a decent level of fine detail and some good color, though the image is overall best described as soft, while darker scenes experience a lack of definition. Some jitter is noticeable throughout, along with some consistent minor dirt and damage and noise, but nothing that takes away from the film too much. Digital distractions aren't a major issue either, though occasional banding can be seen in spots. It's a case of I've seen better, but I've also seen worse.

The Dolby Digital 2.0 track suffers mainly from the use of ADR which is hugely obvious when used, while the score overpowers the rest of the aural elements, becoming muddly when pouring on the bass during more bombastic numbers. Dialogue is clear throughout though, and the sound effects are similarly solid. Expect nothing dynamic about the mix and you will have no complaints.

The Extras
Scorpion Releasing continues to show it's dedicated to providing offbeat releases with bonus content, starting with a new audio commentary by Franklin and producer Tony Ginnane. Franklin obviously hadn't seen the film in some time, so there was a lot of surprise at what she remembered, though she serves as a fine moderator for the chat, asking Ginnane plenty of questions about the production, since she was a young actress just getting started at the time. There's a lot of discussion about the film's nudity, along with talk about edits Ginnane would make if he could have gone back, but one of the more curious comments is about the aspect ratio, as Ginnane references an anamorphic image, when we get a full-frame transfer. Either way, it's an entertaining track powered by Franklin's energy and Ginnane's details.

Both participants recorded separate on-camera interviews as well (10:52 for Ginnane, 12:36 for Franklin), and thankfully there's not a lot of overlapping with the commentary, as Ginnane explains why there were so many writers on the film, while Franklin playfully discusses the nudity and plugs the hell out of her book (which I will need to buy at some point.) A good rule in life is you can never go wrong with more Diane Franklin.

Wrapping things up is a small manual gallery of set stills, courtesy of Franklin, consisting mostly of great shots of her as her various characters. Honestly, how she wasn't a bigger star makes no sense. 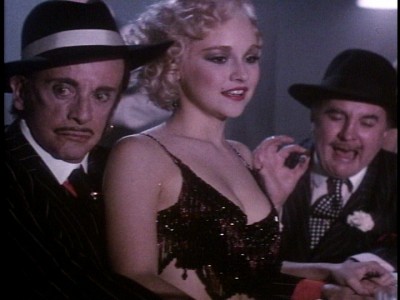 The Bottom Line
A film of grand ambition, Second Time Lucky feels like it should work, but thanks to an inability to stick to a tone, it just doesn't get anything going, outside of being a great showcase for Franklin's fans. The presentation is fine for a film of its age and status, and the bonus features are certainly welcome for those curious enough to pick up a copy. If you fell in love with Franklin in Better Off Dead, you're probably going to want to see her here, as she rises above the material.