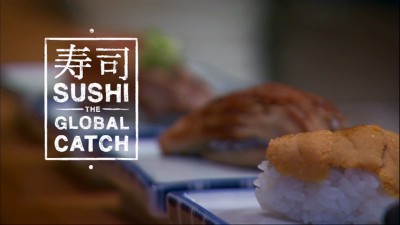 
The Film
One of my favorite documentaries ever is Jiro Dreams of Sushi, which combines a fascinating story of obsession, artistry and familial expectations with one of my favorite cuisines: sushi. It's an amazing tale with beautiful imagery of an incredibly tasty type of food. But before wrapping up the story, the film touches on an issue of concern, as the subjects talk about the effects of overfishing on sushi's future availability. It's a small moment of message is an otherwise apolitical film, but the point really stuck with me, as someone who's certainly enjoyed a few all-you-can eat sushi buffets in my time.

Everything that happens in Jiro, aside from the sushi-master's personal story, and a bit more, is covered in the first 10 minutes of Sushi, a crash course in the cuisine, delivered via interviews and footage of chefs' preparation, including talking to Iron Chef America contestant Tyson Cole. It's a truly interesting lesson, covering the origins of wasabi, the importance of steel and the variations found worldwide. There's a special focus on Tokyo's Tsukiji market, also seen in Jiro, the largest dealer of fish on the planet, where wholesalers evaluate and bid on the goods for further distribution. After a tutorial on the business, we get into the real story of this documentary, which deals with the impact of sushi's explosive popularity growth on fish populations. 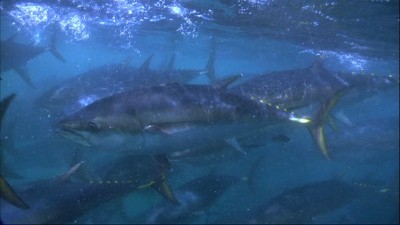 Hopping from continent to continent, the film looks at how tuna shipping has changed since it was first implemented, as well as the many ways it's delivered to consumers, including an unusual sushi push-pop. As sushi is revealed to be becoming increasingly omnipresent, including rapid adoption in populous China, it becomes very clear that demand is likely to outstrip supply, and the film takes a dark turn, showing the fishing process in stark, disturbing detail. I've never been a fan of gruesome animal death videos, and though fish are far more alien than most animals, it's still disturbing to see how the sausage is made, so to speak. Considering how Republican lawmakers can deny things as clearly obvious as environmental chaos, it's impressive that the filmmakers can't find anyone with a financial stake in tuna to deny the existence of a looming crisis for the tuna, those who fish for it and those who enjoy eating it, not to mention possibly the entire ocean ecosystem.

The filmmakers thankfully don't just point out problems, but explore possible solutions, including the concept of sustainable sushi and the potential for farming tuna and spawning them in captivity, as well as the efforts of Greenpeace to encourage change. One of the more interesting things that occurs is an intertwining of the various subjects as their paths cross (probably not a coincidence) which leads to an on-screen discussion between the owner of a sustainable sushi restaurant and an Australian tuna rancher. Both come in with similar good intentions, but it's clear they aren't on the same wavelength, which is unlikely to help them in their efforts to prevent the bluefin tuna's extinction. However, this film is a much more effective argument thanks to the inclusion of many viewpoints. 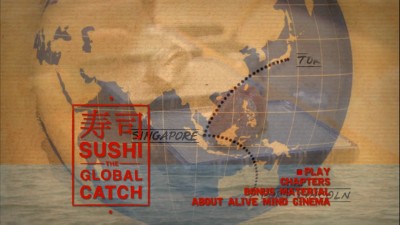 The DVD
A one-disc release, this film is packaged in a standard keepcase, and features an animated anamorphic menu with an option to play the film, select scenes, and check out the extras. There are no audio options, subtitles or closed captioning, though burned-in English subtitles are in the film.

The Quality
The anamorphic widescreen transfer on this film is solid, basically what you would expect from a low-budget documentary done well, with some minor moments of noise. Other than that, it's a quality presentation, with appropriate color, a nice level of fine detail, and nothing in terms of noteable dirt or damage or compression artifacts.

The Dolby Digital 2.0 track is solid, though it's lacking in any kind of dynamic mixing, as is often the case when it comes to documentaries. Once in awhile, there's a scene that's a bit harsh, like the discussion scene, where the two voices are a tad tinny, but for the most part the dialogue and music are clear and clean.

The Extras
In addition to the film's theatrical trailer, a few other Alive Mind trailers and a note aviyt the company, there's a stills gallery and a message from Greenpeace's Casson Trenor (which is not listed on the box.) The still gallery is short at just seven photos, but they are nice, while the message is one text screen about the film, its message and impact.

Considering the film was made back in 2011, an update with this release, even in text form, would have been appreciated. 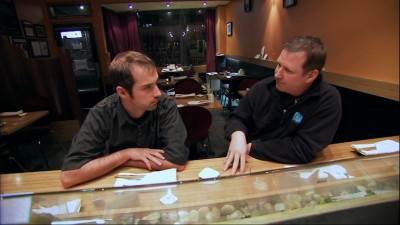 The Bottom Line
I love eating tuna sushi, but it would be a lie to say that, after watching this film, that the next time I sit down at Onsen, that I won't be trying a different fish. It's hard to ignore such obvious evidence, especially when it's presented in such a seemingly even-handed manner. The disc offers the film in fine quality, though the short feature isn't supplemented with many extras, making this one you definitely should check out, but you probably don't need to own.