Temptation: Confessions of a Marriage Counselor 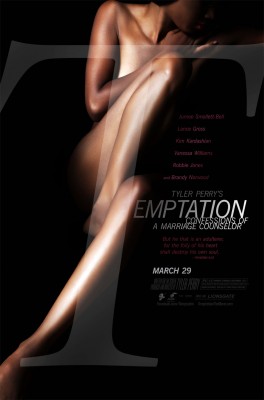 Tyler Perry continues to churn out film after film to savage reviews, but the multifaceted filmmaker can use all the money he is making to soothe the critic-induced wounds. Before screening Temptation: Confessions of a Marriage Counselor, I had never seen a Tyler Perry movie or play. I'm probably not the target audience for Perry, who is best known for creating and performing as Madea, but he has created a lucrative brand. That said, Temptation is absolutely terrible. With a plot so convoluted as to become laughable and some of the pokiest pacing this side of a Terrence Malick drama, Temptation is hardly irresistible. Even worse, the film's queasy undercurrent of violence against women suggests the main character deserves what she gets simply because she strayed from her marriage. Perry's characters are ugly and smug - none more so than Kim Kardashian's completely superfluous fashionista - and he makes sure that even the decent ones get raked through the mud. Temptation is less a film than a nearly two-hour soap opera full of stereotypes and sermonizing.

I saw few redeeming qualities in Temptation, and I find myself in the position of discussing plot points that are definitely considered SPOILERS while appraising its merits. You have been warned. At some point in the future, a marriage counselor, Judith (Jurnee Smollett-Bell), tells an unsuspecting client the longest story ever about her "sister's" marital apocalypse. Of course the story is really about Judith, her husband Brice (Lance Gross) and a home-wrecker, Harley (Robbie Jones). The story moves backward a few years; Judith is interning at a matchmaker service, led by a faux-French boss (Vanessa Williams) and stocked with attractive women like Ava (Kardashian), who, despite being Judith's "friend," constantly tells her she is "forgettable," "ugly," and "tragic." Is this how women relate to one another? Harley is some kind of Mark Zuckerberg-type, and Temptation gives Ava a few lines about how rich he is and what he is supposed to be doing for the office. Harley meets Judith during this work and within the hour asks the married and annoyed Judith if her man likes sex in the shower, sex in the kitchen and sex on a plane. Harley is written like a full-on sexual predator (Viewer beware, you're in for a scare...later!) yet Temptation practically begs its audience to find him charming. As you might have already guessed, Judith and Harley begin a romantic relationship, which has some heavy consequences.

Temptation is so ineptly written that it takes the film over an hour to get anywhere. Early scenes of flirting between Judith and Harley and the brewing domestic trouble for Judith and Brice are interminable. The film lacks both drive and conviction, and rather than create some sort of sexual thriller like Basic Instinct or Unfaithful, Perry is content to film endless shots of the Washington, D.C., skyline and needless field trips to Judith's office. When details are actually important they aren't there. The film never really explains Judith and Brice's relationship. The pair has been together for eight years and Judith is now bored with Brice, who seems like the nicest guy ever. Even though Harley is supposed to be some technology guru, he is never shown at a computer or doing anything related to his supposed occupation. And Judith goes from loving wife to insane, coked out cheater in approximately 60 seconds. There are no character arcs, only violent lurches from one moment to the next. Perry, known for overstuffing his films with drama, seems obsessed with throwing twist after unnecessary twist into the film.

The characters of Temptation are both poorly written and terrible human beings. Harley forces himself on Judith so she can tell Brice she "resisted." Fifteen seconds after nearly being raped, Judith is banging Harley on his private jet. This was a woman who at first glance had a kind demeanor, very decent husband and a promising career. Suddenly, she's done a complete 180 and is acting like a feral cat in heat. Harley is an absolute nutjob and female abuser. Another of the film's ludicrous twists involves R&B singer Brandy, who shows up at Brice's pharmacy looking for work. Turns out, she's running from an abusive lover, later revealed to be Harley. ...AAAAAANNNNDDD he is HIV-positive. Oh, and apparently Temptation is not supposed to be a comedy.

This film is as stupid as it gets. I'd be offended at how Perry throws Judith under the bus if Temptation weren't so poorly constructed. I guess the message is that one should be wary before giving into temptation. Since the film bungles that, the takeaway is that Judith is a real slut who gets what she deserves. She also has a crazy religious mom (Ella Joyce) that tries to exorcise the devil out of her. Poor girl. You know that scene in Mean Girls, when the gym teacher tells the class that they will "get chlamydia and die" if they have sex? Temptation rehashes that message and is 100 percent serious about it. I'm not sure what Perry is trying to say here, but Temptation is not deep enough to warrant any further effort into understanding its motivations. This is an embarrassingly clumsy relationship drama that appears to not understand anything at all about how people interact. Stereotypes, lousy pacing, unimpressive editing and overacting abound, too, so the film fails on all accounts. Smollett-Bell does her best with the awkward lead role, and I hope to see her in something better soon. Perry may be cashing in at the box office, but I doubt I'll be seeking out his other work anytime soon.

The 2.35:1/1080p/AVC-encoded transfer if good, sporting solid detail and texture throughout. Skin tones are natural and colors are vibrant. There are quite a few very dimly lit scenes, but shadows don't completely cloak the underlying details. There are no traces of digital scrubbing or aliasing.

The 5.1 DTS-HD Master Audio soundtrack is also proficient, and the endless streams of dialogue are consistently audible. Some ambient effects and a couple of action bits make use of the surround speakers and subwoofer. The score is clear and nicely balanced with dialogue and effects. A Spanish 5.1 Dolby Digital track is also included, as are English, English SDH and Spanish subtitles.

This single-disc release is packed in a Blu-ray eco-case, which is wrapped in a matching slipcover. Inside is a code to redeem an UltraViolet digital copy of the film. There are only two extras: Professional Fashionistas (7:41/HD) looks at the wardrobe department and costumes, while The Temptation Ensemble (13:32/HD) looks at the cast.

No, Temptation: Confessions of a Marriage Counselor is not a good movie. Tyler Perry continues to be the Teflon Don of filmmaking, as most of his movies do huge numbers at the box office despite terrible reviews. Temptation is a boring, sloppy drama about the dangers of infidelity that packs so much nonsense into the narrative that it bursts at the gills. The message is murky, the characters are appalling and Perry proves an underwhelming writer/producer/director here. Skip It.