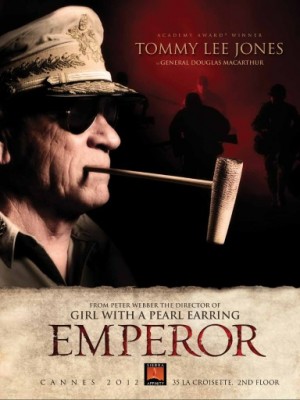 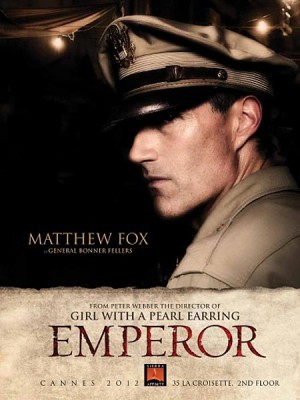 Handsomely shot but dramatically unsatisfying, Emperor at times feels like a visual CliffsNotes on US/Japan relations at the end of World War II. Tommy Lee Jones is a scene-stealing Gen. Douglas MacArthur, who doesn't appear in nearly enough scenes, and Emperor mostly follows a stoic Matthew Fox as Brig. Gen. Bonner Fellers, who is tasked with sorting out whether or not Japanese Emperor Hirohito (Takataro Kataoka) authorized the sneak attack on Pearl Harbor in 1941. Fellers' search for the truth makes for a sporadically interesting procedural, but Emperor never kicks into high gear. The film also mixes in a love story between Fellers and a young Japanese woman, but this never moves past warmly lit scenes of the pair sharing chaste moments at an American college. Director Peter Webber does a nice job stretching his limited budget, but the screenplay by Vera Blasi and David Klass, which is based on a book by Shiro Okamoto, is both too busy and too tempered to whip up much excitement.

Japan is in ruins after the dual atomic bombings of Hiroshima and Nagasaki and the devastating firebombing of Tokyo. The higher-ups in Washington want the Emperor to hang for war crimes but others, including MacArthur and Fellers, fear this could send the entire country into an unrecoverable spin. Fellers speaks Japanese and knows the culture, so he's a natural choice to sift through the duplicitous accounts of the Emperor's role in the war. This creates the basic structure of Emperor, an even-handed wartime procedural, and the film at first maintained my interest with Fellers' revealing interviews with top Japanese officials. Unfortunately, this travel-and-talk structure grows old quickly, and the added love story is not much better. Fellers met college exchange student Aya Shimada (Eriko Hatsune) several years before the war, but lost contact when she was forced to move back to Japan. Fellers begins looking for Aya during his official outings, something he hides from MacArthur. Other than a few flashbacks to a sweet college outing, Emperor does little to persuade the audience that this relationship is worth investing in, and the whole affair is haphazardly interspersed with the core story.

The main problem with Emperor is its inability to commit to any one storytelling path. The wartime sleuthing might have supported its own movie had it been fleshed out and livened up with something other than a few terse back-and-forths between Fellers and Japanese generals. The love story here feels like the inevitable human-interest portion of Hollywood war movies and it hardly makes for compelling drama. The problem is that Emperor tells rather than shows the audience that losing Aya has greatly hurt Fellers. Aya is a beautiful woman, but is given little chance to display a personality that might make her so memorable. It is revealed later that Fellers redirected wartime operations away from Aya's village, but this is again something the film simply tells the audience.

The film overuses Fox's straightforward voiceover to move the story forward, which feels lazy despite the typewriter-and-pen credits and title scrawls used to set the mood. Fox turns in an adequate performance as the real-life Brigadier General, but the Lost alum doesn't exactly ooze personality. Better is Jones, who chews much scenery as MacArthur, a man poised to run for president and more cognizant than most that Japan has a long history of loyalty and a strict hierarchical structure. I suspect the filmmakers only had a few days with Jones, and I wish he was in more scenes. His performance adds a spark of energy that the film otherwise lacks. Emperor is not a particularly bad film, but it feels like a missed opportunity. The film teases but never digs into Japan's interesting social history, and the love story does little to redeem the rapidly deteriorating wartime procedural elements.

A typically solid transfer from Lionsgate, Emperor's 2.35:1/1080p/AVC-encoded image is nicely detailed and textured. The film feels more epic than its budget suggests, and the transfer does a nice job handling the frequent wide shots of wartime devastation and the Japanese countryside, which are immensely detailed and crystal clear. Skin tones are accurate and colors nicely saturated, whether during grittier Japan-set scenes or the rosy scenes at college in America. Black levels and shadow detail are both solid, and there are no issues with aliasing or digital smearing.

The 5.1 DTS-HD Master Audio soundtrack is quite expansive and immediately gives the subwoofer a workout as bombs fall on Japan. There isn't a ton of action, but effects both bombastic and subtle are given free rein to move throughout the sound field. Planes landing, rain falling and a crowd yelling are examples of these surround-heavy effects, and these are layered appropriately with dialogue and score. English, English SDH and Spanish subtitles are available.

In the Audio Commentary with Director Peter Webber and Producer Yoko Narahashi, it is revealed that Narahashi's grandfather was an important palace official during World War II. She provides historical context missing from the film proper, and her educated comments mix well with Webber's lively discussion of the film's technical aspects. Revenge or Justice: The Making of Emperor (15:03/HD) is a decent making-of featurette, and it's accompanied by several Deleted Scenes (6:42/HD), a Behind-the-Scenes Photo Gallery (HD), an Historical Photo Gallery (HD), and the film's Theatrical Trailer (2:26/HD).

I wish Emperor had lived up to the promise of its early scenes with Tommy Lee Jones as a lively Gen. Douglas MacArthur, who enlists Matthew Fox's Brig. Gen. Bonner Fellers to uncover the extent of the Japanese emperor's involvement in the attack on Pearl Harbor. These early moments are lively and interesting, but the rest of Emperor, with its deteriorating wartime procedural elements and ho-hum love story, is far less entertaining. History buffs may want to check this out, but most others can probably Skip It and not miss out.