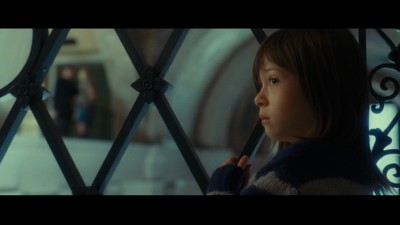 Please Note: The images used here are taken from the DVD edition also included in this retail package, and do not directly reflect the picture quality of the Blu-ray edition under review.

Let it be said from the start that, although co-directors Scott McGehee and David Siegel's new film What Maisie New is based on an 1897 novel by the forbiddingly masterful Henry James (The Portrait of a Lady), its trueness to the book from which it derives its name is negligible. What the script (by Nancy Doyne and Carroll Cartwright) has to offer is less an adaptation of James's story (of a six-year-old girl caught like a prized pawn in her divorcing/remarrying parents' overweening desire for adulation and vindication) and more of a free harvesting of the bits that fit their primary purpose of updating the child-centric tale to present-day New York City. (In this way, it's not dissimilar from the tack taken by Paul Thomas Anderson with his extremely-selective "adaptation" of Upton Sinclair's Oil! for There Will Be Blood.) But faithfulness to the letter of a literary source is an unfeasible criterion by which to judge most any "based-upon" film; in the case of What Maisie Knew, even the filmmakers' playing pretty fast and loose with the spirit of what James wrote isn't too much of a problem. Where they fall short -- and they don't do it often enough to make the film unsalvageable -- is in adhering closely enough to their own self-evident goal of taking seriously, in a meticulous and conscientious way that lets us into its truth and urgency, the situation of an emotionally pure little girl floundering courageously toward some unseen shore amid the affective convolutions of the confused adults that care (or try to care) for her. 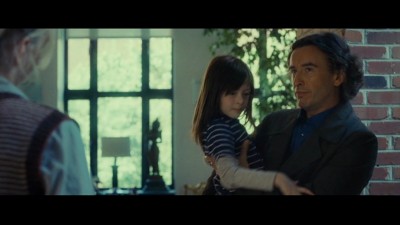 McGehee and Siegel have easily surmounted the central problem -- casting their six-year-old principal protagonist -- by choosing the serious-faced, convincingly guileless yet wise Onata Aprile to play Maisie, an actually poor little rich girl who clings to the sweet, solid rock of her twentysomething Scottish nanny, Margo (Joanna Vanderham), and the routine of materially cozy private-school days as her well-off, well-meaning middle-aged parents -- a jet-setting, often absentee British dad, Beale (Steve Coogan), and a successful but fading tortured-rock-star mom, Susanna (Julianne Moore) -- try but fail miserably to shelter her from their venomous split and its rancorous aftermath, who gets Maisie being the biggest bone of contention. Maisie's shared-custody loyalties are divided to the point of unbearableness when Margo, who's moves in with and married her father (hinting at his longstanding infidelity) and Lincoln (Alexander Skarsgard, Melancholia), a bartender Susanna has married for convenience and revenge (very heedlessly informing Maisie that "I married him for you"), are driven into roles as de facto parents (and, eventually, into each other's arms) by her real parents' hapless self-involvement and inadvertent negligence. 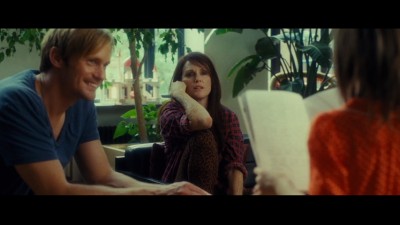 The script is just fine -- insightful, thoughtful, aware of where best to place the emphases both structurally and within scenes, maximizing the meaning of subtly-shaped dialogue, interactions, and plot developments. And McGehee and Siegel -- whose best-known film is probably another adaptation, 2005's Bee Season, but whose actual best film remains an adaptation of an adaptation, 2001's The Deep End (a brilliant and near-wholly successful reworking of Max Ophuls' classic 1949 magazine article-based The Reckless Moment) -- for the most part use their straightforward but clean, clear, and classically elegant visual approach to conjure a tone compassionate, sensitive honesty and channel their actors' diversely stellar energies (the ever-accomplished Moore adds another notch to her belt here, proving herself capable of anything in her easy embodiment of an impassioned/reckless Courtney Love type; Skarsgard's persona of handsome self-deprecation is just the right mix of sweet and hot for Lincoln; the lovely Vanderham's delicacy is very moving; and Coogan's great talent as an improvisational comedian is appropriately restrained and harnessed for his minor but memorable role as a "fun," secretly very sad dad). But each time the filmmakers slip, letting overearnest cooing and strumming singer-songwriter-y coffee shop-background tones overwhelm the soundtrack as they regurgitate tacky postcard montages of Maisie frolicking in slo-mo, every cheap cue of childlike wonder blaring shrilly from the screen, it delivers a weakening body blow from which it takes the film a while to recover. And their choice to end it on such a thing is tragic, a waste (if you believe, as I do, that final notes are usually vital). In the end, McGehee and Siegel can't quite decide whether they're telling a moving story from a brave, strong, actually unfortunate child's POV or making a superficial commercial for her nicely-dressed, penthouse-dwelling lifestyle, and the film suffers deeply for that indecision. 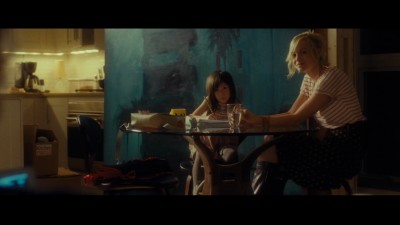 Those detours into trivialization and shocking obviousness leave a bad taste, a lingering, disruptive trace that, maddeningly, keeps What Maisie Knew from being all one can see it might have been. But they can't entirely overwhelm and submerge the nice, long sections where the directors' steady, observant camera and fluently-managed cutting draw us into the complex relationships, the divided and subdivided affections and loyalties in a web of relationships that could've come off as soap opera but evades that fate in McGehee's and Siegel's often skilled, empathetic, and sophisticated hands. It makes for a fairly compromised experience, these warring impulses of soft-headedness and genuine soft-heartedness that apparently have hold of the filmmakers. But, regretful as its failure to bloom into its full potential may ultimately leave us feeling, it's worth the disappointment to get access to the very good, sometimes quite deep and fine work this team also shows itself capable of. Despite their intermittent failures of nerve, McGehee and Siegel are filmmakers that can't be too easily dismissed; their talent for cinematic storytelling, as it appears in sufficient abundance here, intrigues and often beguiles. Here's hoping that next time, they take the leap and let their better instincts prevail. 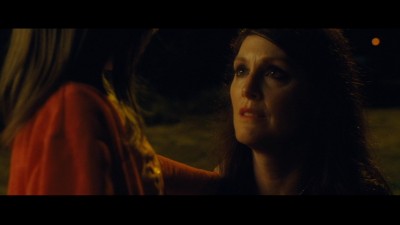 
This very nice transfer -- a 1080p-mastered affair preserving the original widescreen aspect ratio of 2.40:1 -- that contains no visible flaws or artifacts to speak of, with a clarity, vividness, and detail that retain all the richness and contrasts, even in the most dimly lit or dark scenes, of Giles Nuttgen's cinematography. No evident overuse of digital smoothing/noise reduction has compromised the celluloid-like texture of the images. Overall, What Maisie Knew 's picture quality on Blu-ray is impressive.


The disc's Dolby TrueHD soundtrack (also available as Dolby Digital 2.0 stereo) is practically perfect, as well, offering up every part of the sound -- dialogue, ambient noise, Nick Urata's score and all other music -- in deep, clear, resonant, highly detailed (when the sound design calls for it, as when music within the film is meant to be heard from several rooms away) tones that never veers into imbalance and has no distortion at any point. 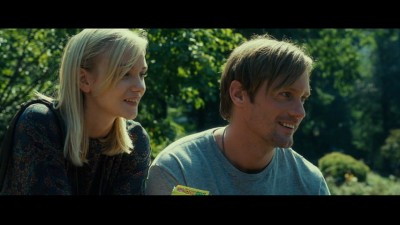 
--Feature commentary with co-directors Scott McGeehee and David Siegel, who, with great, lighthearted deliberation, focus, and excellent memories, treat us to their recollections of the making of the film (explaining certain decisions of casting, production design, costume, etc.), their work with the actors (Steve Coogan and Julianne Moore mostly improvised their collapsing-marriage fights), the struggle of working with a six-year-old actor's very limited (by child labor laws) schedule, etc. They don't address or explain the problems this reviewer had with some of their choices, but it's good stuff nevertheless.

--Four deleted scenes (7 min.), a couple of which (involving Maisie and a locksmith, which would've made for a nice rhyme with another locksmith-centric scene, and Maisie and a neighbor) perhaps should have been left in, especially if it had been in lieu of some of the sappier stuff; and another two, centering on Moore's character's rock-star persona, which would have contributed little to the film's main thrust, and the omission of which was apt.

--The film's theatrical trailer, along with several other previews for Millennium Entertainment releases.

--This Blu-ray/DVD combo package also contains the DVD version of the film. 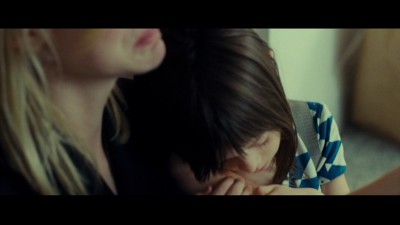 An adventurous concept intriguingly executed by some talented dramatic filmmakers, Scott McGehee and David Siegel's What Maisie Knew -- a contemporary retelling of a century-old Henry James novel -- is quite unfaithful to the source, but that's neither here nor there: Its real frustrations, which it only just survives, lie in its simultaneous offering of long stretches of subtle, emotionally astute, elegantly but not over-ornately filmed serious-emotional-drama and repeated, reckless veers into tiresome, sappy cliché. All the extreme liberties that screenwriters Nancy Doyne and Carroll Cartwright take with James's story (about a precocious, serious little girl (Onata Aprile) subject to the whims of her divorced parents (Julianne Moore and Steve Coogan) and other adults with varying senses of responsibility in her life) actually work, as does the film when McGehee and Siegel are on top of their craft. But, almost like clockwork, the film's bounty of sensitively written, played, and edited scenes -- many of which are remarkably apt at giving us the child's point of view gimmick-free, with no easy self-righteousness or condemnation of the oft-misguided grown-ups -- give way at intervals to treacly moments where faux-heartfelt coffeehouse singer-songwriter tones overwhelm the soundtrack and the slo-mo idyllic-childhoodisms dampens it into a soggy Gap Kids commercial. McGehee and Siegel have enough insight and genuine taste to make What Maisie Knew worth tolerating its infrequent but unfortunate concessions to unimaginative sentiment in order to appreciate its truer, more involving and affecting self, and so can be cautiously Recommended with a clear conscience, with the caveat that this mostly-pretty-okay-after-all film has enough glimmers of something much better that it inspires an unusual degree of regret over its compromises.