Redemption Films // Unrated // August 20, 2013
List Price: $29.95 [Buy now and save at Amazon]
Review by Stuart Galbraith IV | posted August 16, 2013 | E-mail the Author
When director Jesús Franco Manera, Jess Franco, died this past spring at the age of 82, the outpouring of grief surprised, even startled many of us who've long regarded him as a prolific and intelligent but essentially talentless charlatan. Stop-motion animator and producer Ray Harryhausen, the giant of his field, passed away around the same time yet on the Internet, at places like the invaluable Classic Horror Movie Board, comments mourning Franco outnumbered Harryhausen three-to-two.

Jesus Franco was a name familiar to genre fans, if only because he had his fingers in so many pies. Indeed, he seemed to have his finger in every pie. (He made nearly 200 films over 55 years.) He claimed to be pals and collaborators with the likes of Orson Welles and Jean-Pierre Melville, but was also a producer-director-writer-cinematographer-actor whose credits include hard-core porn. Thirty years ago virtually none of his movies were available anywhere in the U.S., but with the advent of DVD Franco's movies entered into the marketplace like raw sewage pouring in from a burst pipe. Some reviewers, this one included, struggled through dozens of Franco movies, consistently appalled by their extreme shoddiness, while others, notably Video Watchdog's Tim Lucas, declared Franco an unheralded genius.

My theory has always been that Franco showed some promise in his earliest films but by the late 1960s his movies became worse than amateurish, marked by out-of-focus camerawork, incoherent editing, incessant yet pointless use of zoom lenses, and unseemly yet decidedly unarousing voyeurism and exhibitionism.

The Awful Dr. Orlof (Gritos en la noch, 1962, first released in the U.S. as The Awful Dr. Orloff, with two "F"s) is one of Franco's earliest and best films, and it's in focus. It's effective, too, a moody, dreamlike horror film Franco claims was inspired by a Hammer Dracula film but whose look and plot mirror both The Dark Eyes of London (1939), a British Edgar Wallace adaptation starring Béla Lugosi, and especially Georges Franju's Eyes Without a Face (Les yeux sans visage, 1960), released nearly three years earlier. Amusingly, in the interview included on this disc, Franco denies being influenced by Franju but generously offers that "Franju was not influenced by Orlof," either.

Kino-Lorber's Blu-ray, under its Redemption Films label, offers a fine presentation of the film in its more graphic French version (featuring gratuitous nudity, called L'horrible Docteur Orlof), though overall it's shorter than the heavily censored Spanish cut. This release is presented in French with English subtitles, or it can be viewed with English-dubbed audio. Excellent if somewhat pretentious extras support this release. 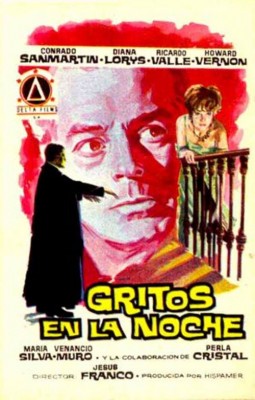 Swiss actor Howard Vernon (born Mario Lippert) stars as Dr. Orlof, a retired prison physician who in 1912 France is obsessed with restoring his adult daughter's disfigured face. Aided by blind but bug-eyed and unblinking, robot-like henchman Morpho (Ricardo Valle), Orlof lures beautiful women to a nearby empty mansion or his island castle, murdering them for the facial skin grafts their bodies provide.

Wanda (Diana Lorys), the fiancée of Inspector Tanner (Conrado San Martin), is a dead-ringer for Orlof's daughter (Lorys plays both parts) and she hatches a plan to lure Orlof out of the shadows and help her boyfriend nab the mysterious serial killer.

The reason The Awful Dr. Orlof is pretty good and most of his later movies are unwatchable may have less to do with Franco than other factors. What stands out most about the film is the startlingly good black and white cinematography of Godofredo Pacheco. It approaches the chiaroscuro of Bava's black and white films and the slickness of the early krimi emanating from West Germany. It certainly doesn't resemble Hammer's gothic horror films at all.

Pacheco, rather than Franco, seems chiefly responsible for Orlof's striking visual design, which makes terrific use of existing period locations. Franco's later movies all tend to look alike, regardless of genre, and none of them, even the six loosely connected Orlof sequels, don't resemble this one.

Franco was also stealing from the best. Without exactly copying Franju and others, Franco was nevertheless drawing on material that reliably had worked in the past innumerable times before (even 1958's She Demons is moderately effective in this regard), with Pacheco's compositions combined with a better-than-usual cast, The Horrible Dr. Orlof was a difficult film to screw up.

One contribution Franco does make is his choice of an ahead-of-its-time discordant avant-garde musical score, credited to José Pagán and Antonio Ramírez Ángel, which is chiefly responsible for giving the picture its dream-like feel. (There is, however, an overuse of a slide-whistle, threatening to turn the score into something resembling the Hoosier Hot Shots.)

The Awful Dr. Orlof utilizes an archival French print in good condition for its HD master. Presented in 1.66:1 widescreen the film is in French mono with optional English subs, though considering the mostly non-French cast I was content with the equally good English dubbed version, which helpfully subtitles French signboards, newspaper headlines, telegrams and the like.

The numerous supplements strain to give Franco credibility; one interviewee refers to the "simple lyricism" of Franco's later work (perhaps Dr. Wong's Virtual Hell, perhaps? Snakewoman? Killer Barbys vs. Dracula?), the kind of thing that had my eyes glazing over like Morpho's.

Nevertheless, Tim Lucas provides an informed, passionate audio commentary, while three featurettes, all in high-def, make the case for Orlof's director: "The Horror of Orlof," with an ailing Franco filmed shortly before his death; "The Young Dr. Orlof Chronicles," about the making of the film; and "Jess! What Are You Doing Now?" a homage featuring friends and historians. All of these are well made, while Kino's photo gallery offers some excellent high-def images from the film. A collection of Franco trailers, a jumble of good and bad material, is also included.

The Awful Dr. Orlof is the one Jesus Franco movie definitely worth seeing. Kino's transfer is strong, and the supplements are terrific. Highly Recommended.