Image // Unrated // August 6, 2013 // Region 0
List Price: $59.98 [Buy now and save at Amazon]
Review by Stuart Galbraith IV | posted August 19, 2013 | E-mail the Author
The Blu-ray of the fifth and final season of The Dick Van Dyke Show (1965-66) brings to a close individual season sets previously available only as part of a complete series Blu-ray boxed set, released late last fall. Perhaps like me you already have the complete series on DVD and found the Blu-ray set's $349.98 SRP a little daunting, making double-dipping a season at a time easier on the wallet, though as I write this some of the season sets and the complete series are heavily discounted online.

Creator, head-writer, and semi-regular (by this point) Carl Reiner famously decided to quit while he was ahead, purposely concluding The Dick Van Dyke Show at the end of its fifth year, although the show was still a critical success and among the Top 20 primetime shows, ratings-wise. Somewhat prematurely, about a week before the final episode aired it won big at that year's Emmy Awards, including statuettes for Outstanding Comedy Series (presented to Reiner), to writers Bill Persky and Sam Denoff for "Coast to Coast Big Mouth," to Dick Van Dyke and Mary Tyler Moore for their performances, and nominations to just about everyone else connected with the show.

Ending a still-popular series isn't unusual today, nor is it unusual to produce a series finale episode. But back in 1966 such things were extremely rare, though not without precedent. Happily, there was no measurable decline in the writing of The Dick Van Dyke Show. It didn't resort to any of the bad precedents established by I Love Lucy throughout its run. Laura doesn't have a baby, Rob doesn't relocate to Hollywood to write a comedy film of Don Juan for Alan Brady, there's no endless parade of famous guest stars.

In my review of the Blu-ray of The Complete Third Season, I posed the question, Is The Dick Van Dyke Show funnier in 1080p? Then as now I'd argue that, subtly, it is. The added clarity - and there is a considerable jump in resolution - brings episodes that much closer to the immediacy of those live-on-film performances. The added resolution, for instance, makes the subtleties of the actors' expressions (and, vitally, reactions) easier to see. If watching the show in syndication, 16mm prints in the old days, Nick at Nite on basic cable later on, was like watching the show through a window, and on DVD like sitting in the back row of the studio audience, these new Blu-rays put you about in the middle of the second row.

And, if you're already a die-hard fan of the series as I am, it's simply kind of neat to see the familiar surroundings so much clearer: the writers' office, the Petrie's living room, kitchen, and bedroom. For instance, the ever-present but never explained framed sheet music behind Rob's desk, "The Dairy-Maids," is more distinguishable than ever. (It's the little things in life…) Also watching these discs I spotted something I had never noticed before. By season five Dick Van Dyke's hair is already turning salt-and-pepper. 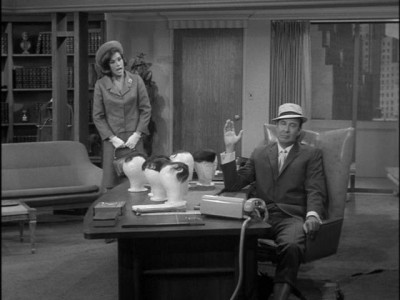 Image and Paul Brownstein Productions began releasing the series to DVD in season sets beginning in October 2003. Attractively packaged and loaded down with superb extra features, these sets are still among the best-ever TV-on-DVD releases to date. The Blu-ray edition mainly serves to bump episodes to high-def while retaining all the marvelous and extremely worthwhile extra features from the DVD editions. The exclusive-to-Blu-ray material is so minimal, about five minutes worth of material, is hardly worth mentioning. More on all this below.

For the uninitiated, The Dick Van Dyke Show follows the adventures of Rob Petrie (Van Dyke), head writer for The Alan Brady Show, a comedy-variety series of the type then in vogue. Stories alternate between the lives and professional challenges coming up with acceptable scripts for vain star-producer Brady (Reiner), with Rob aided by colorful collaborators Buddy Sorrell (Morey Amsterdam, loosely based on Mel Brooks) and Sally Rogers (Rose Marie, based on Selma Diamond); and Rob's home life in suburban New Rochelle, New York, with wife Laura (Mary Tyler Moore) and, their disproportionately less visible son Richie (Larry Mathews).

By its fifth year, Reiner and Van Dyke especially were ready to move on to bigger and better things. Reiner was already leaving the show in the capable hands of Persky and Denoff, who began as free-lance contributors but by year five were promoted to story editors and co-producers, so that Reiner could direct and star in The Russians Are Coming! The Russians Are Coming!, while Van Dyke scored big in Mary Poppins in the middle of the series' run. Mary Tyler Moore, meanwhile, was wooed into an ultimately less successful pact with Universal before her first "comeback" on the similarly structured Mary Tyler Moore series. Rose Marie and Morey Amsterdam, well, they were busy shooting Amsterdam's terrible but fascinating Don't Worry, We'll Think of a Title around this same time.

Though they may have been preoccupied with these and other matters, the cast and crew of The Dick Van Dyke Show still came up with many terrific episodes, beginning with "Coast-to-Coast Big Mouth," in which Laura, a contestant on one of the network's afternoon game shows, on live TV is tricked into revealing that Alan Brady wears a rug. In a classic sequence, she then slips into Alan's office, hoping a profuse apology will prevent Rob from getting sacked. Other good shows this season include "Uhny Uftz," in which Rob claims to have seen a flying saucer zip past his office window; "The Ugliest Dog in the World," in which the Petries temporarily adopt a dog; "Go Tell the Birds and Bees," in which Richie gets into trouble at school after telling his classmates "where babies come from"; "The Curse of the Petrie People," in which Laura accidentally destroys a Petrie family heirloom; "Dear Sally Rogers," in which Sally makes a national network plea for a husband; "Buddy Sorrell, Man and Boy," in which Buddy prepares for a belated bar mitzvah; "The Last Chapter," a semi-wrap to the series buttressed with clips from past shows; and "The Gunslinger," the last episode filmed, crammed with in-jokes and insider cameos.

Upgrades from DVD to Blu vary considerably, but these shows really "pop" with added clarity. In my review of one of the DVD sets, I marveled at the "near-flawless series of transfers." Now those transfers seem muddy and murky compared to what's on these Blu-ray discs. Sourcing the original 35mm camera negatives, the detail of these 4:3 shows is remarkable. One notices little details: the textures of Rob's finely-tailored suits, Mary Tyler Moore's freckles, etc. The DTS-HD Master Audio (mono English only) is always sharp and clear. Though I miss the little 3-D TV sets the DVDs were packaged in, the logical organization here and menu screens make navigation easy. The Complete Fifth Season, offers all 31 half-hour episodes across three region-free discs.

Included are two "exclusive to Blu-ray features" that, honestly, are barely worth a mention: a two-and-a-half minute clip from the TV Academy Tribute to Carl Reiner featuring Garry Shandling; and a smattering of Me-TV promos.

Fortunately, everything from the DVD versions has been ported over, and that's all great stuff. They include production stills for most episodes; screen-specific audio commentary tracks with Carl Reiner and Dick Van Dyke, as well as Rose Marie, Larry Mathews, and Bill Idelson; on camera interviews with the cast and crew, scattered throughout the set (interviewees include Amsterdam and co-executive producer Sheldon Leonard, both of whom have since passed away). In another segment, Don Rickles recalls his two-part episode.

Also included are a clip from the TV Land Awards featuring the cast; Emmy Awards clips; a 1992 Comic Relief cast reunion; a scene from Dick Van Dyke and the Other Woman TV special, featuring Mary Tyler Moore; a theatrical trailer for The Art of Love; a promo spot for The New Dick Van Dyke; and more. Sadly, not included, presumably due to rights issues, is The Dick Van Dyke Show Revisited (2004), conceived as the show's 159th episode, and which reunited the surviving cast. It's no masterpiece but delightful in its own way.

The Dick Van Dyke Show is one of those no-collection-is-complete-without titles, and on Blu-ray The Complete Fifth Season really sparkles. A DVD Talk Collector Series title.