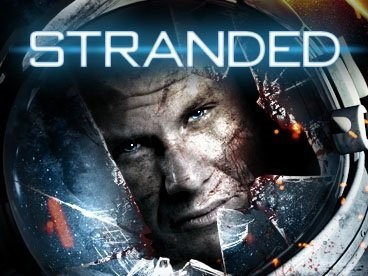 I can say with some confidence that this isn't the worst science fiction film Roger Christian has ever directed. That would be Battlefield Earth, the John Travolta/Scientology in space disaster that won four Golden Raspberry Awards and lost Warner Brothers a ton of money. No, Stranded isn't even that bad, it's just wholly unoriginal and boring. The film does its best impression of The Thing, with a little Alien thrown in for kicks. Several astronauts, including Christian Slater's Col. Gerard Brauchman, are marooned at a lunar mining base after a freak meteor storm damages their communications equipment. Something inhuman finds its way inside the base's confines and begins infecting and transforming its hosts. Stranded makes OK use of its minimal budget, but there's just not enough here of interest to make it worth watching.

After meteors rip through several of the base's compartments, Brauchman sends Ava Cameron (Amy Matysio) to patch up the damage. Cameron brings a piece of a meteor to Dr. Lance Krauss (Brendan Fehr), who discovers it covered in spores. While analyzing the sample, Cameron cuts her finger on a test tube, allowing the specimen to make contact with her body. Betcha can guess what happens next, right? The life form in Stranded has one goal: infect and conquer. Stranded is almost exactly like The Thing except it has zero personality and there's a severe lack of John Carpenter and Kurt Russell.

When the shit hits the fan, Cameron is confined to a med ward. The best parts of Stranded are a few surprisingly well written back-and-forths between the crew over the legitimacy of Cameron's claims that something has infected her. Dr. Krauss thinks Cameron is delusional from carbon dioxide exposure and subsequently convinces Brauchman and crewmember Bruce Johns (Michael Therriault) to ignore her pleas for help. Stranded hints at a better movie; one about the aberrations of space, perils of close confinement and psychological trauma. Unfortunately, the film loses focus and feels more like a string of random, uninteresting events around the lunar base. The compound's computer system - a pale imitation of the MU-TH-UR 6000 from Alien - even sounds uninterested.

This basically direct-to-video thriller features more competent acting than most similar titles but that's not to say the performances are stellar. Slater continues working to live, and the clunky script by Christian and Christian Piers Betley does him no favors. The three other lead actors are also decent, especially Therriault, whose really sells his character's descent into madness. There are some solid practical effects, especially near the end, and it's refreshing to see the filmmakers used miniatures and other in-camera effects instead of cut-rate CGI. Unfortunately, the film mostly plods along until its unremarkable conclusion. Nothing about Stranded is especially offensive, but there is nothing compelling enough to warrant wasting 90 minutes of your time on a rehash of better sci-fi films.

The 2.35:1/1080p/AVC-encoded transfer is very dark since the meteor shower damages the base's power supply. Black levels are solid but there is plenty of black crush to hamper shadow detail. The filmmakers obviously used this technique to create the ominous mood, and viewers are only able to peer into shadows when the film wants them to. The lack of light means detail is somewhat diminished, though a few scenes provide impressive close-ups with good texture. There's some noise here and there, as well as a few shots when the softness/black crush looks less intentional than a result of compression.

The 5.1 DTS-HD Master Audio soundtrack is competent, providing some immersive surround action during the early meteor shower and subsequent action sequences. The track isn't as substantial as those of big-budget blockbusters, but the separation between dialogue, effects and score is good. The subwoofer occasionally supports the more bombastic moments, and I noticed no hiss or feedback.

This single-disc release comes in a standard Blu-ray case, which is wrapped in a slipcover. Extras include EPK featurette The Making of Stranded (14:53/HD), as well as Life on the Moon: The Effects of Stranded (6:32/HD), which focuses on the makeup and miniatures used in the film.

Not as bad as director Roger Christian's Battlefield Earth by a long shot, Stranded is still an unremarkable rehash of classic sci-fi movies like The Thing and Alien. There's nothing here we haven't seen before, and, unless you're a huge Christian Slater fan, you can Skip It.