Though I've never been a big fan of hip hop music, I've found that movies centered around it are usually enjoyable. 8 Mile for example worked for me even though it was clichéd with the whole poor-person-struggling-to-hit-it-big theme, but on the other hand there have been movies like Turn It Up which were extremely forgettable and seemed to just be preying upon their target audiences. I wasn't sure what I was going to get with Filly Brown but I was willing to give it a shot. 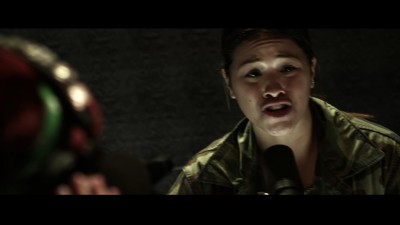 The title character, whose real name is Majo Tonorio (played by Gina Rodriguez and having no connection with the similarly-named Foxy Brown), writes her own "rhymes" about her life and dreams of becoming a superstar. What really motivates her however is to help her mother (Jenni Rivera) get released from prison. Although we don't get much of a backstory, Majo finds out that the police officer who convicted her got into some trouble of his own and could possibly get her mother's sentence overturned. She needs help from the family attorney (played by Edward James Olmos) to make this happen, but of course he requires money that she can earn with her talent. Even her father (played by Lou Diamond Phillips) isn't supportive of this- he states that he no longer loves his wife, and most of the other family members have also given up on her but Majo remains confident that she can get out of prison and put her life back together.

After first performing on a local internet radio show, Majo meets promoter Rayborn Esparza (played by Pete "Chingo Bling" Harrera) who thinks he can get her a record deal, but talks her into changing her act from rapping about her life and issues concerning her to one more pop-like with sexually-charged lyrics. While this is treated as her "selling out", most of her followers still take it rather lightly. She soon lands a record deal after a public performance, but it's clear that not everyone who can help her rise to the top really has her best interests at heart, and eventually she has to make some hard decisions.

In someone else's hands, Filly Brown could have easily been very clichéd and unintentionally funny, but the cast and direction just make it work. Gina Rodriguez's performance really makes you care about the main character and hope that she'll at least be able to solve her family's problems if not make her superstar dream come true. A few scenes showing her crafting her musical act are augmented with the use of split-screens. The supporting cast also gives it their best and made me care about their characters rather than laugh at them. Lou Diamond Phillips is especially convincing as someone resigned to being a single father after his wife has made too many bad decisions and wound up in prison. 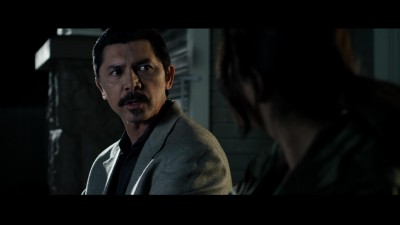 Shot using RED Digital Cinema equipment in a 2.35 ratio, the picture is very detailed but the single-layer Blu-Ray disc suffers from some compression artifacts in dark scenes. While this isn't enough to ruin one's enjoyment of the movie, it seems that with competition from internet streaming those who encode and author Blu-Ray discs should be more mindful of the format's ability to present a picture free of these distractions. Colors are intentionally muted throughout, and more so in some scenes than others.

Despite there being a DTS-HD Master Audio logo on the cover and disc, the only audio here is standard Dolby Digital, with the choice of a 5.1 or 2-channel mix. The audio quality is still decent despite the lossy audio, with plenty of bass in the music sequences and a few well-placed surround effects.

A Spanish dub is also included and strangely also gives you the choice of a 5.1 or 2-channel mix, although the 2-channel track turns out to actually be in mono. Spanish subtitles are available, but there are no English subtitles nor even regular closed-captions despite the "English Closed Captioned" indication on the back cover (and a few Blu-Rays, mainly the earlier releases from Sony and Fox, actually do have regular closed captions although you must have an analog video connection and set its resolution down to 480i to access them. I did so with this disc just to check and they were not there.) 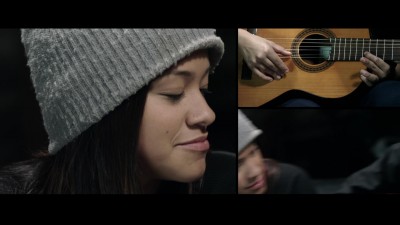 A total of 25 minutes of deleted and alternate scenes is included (in high definition with mono sound), most notably a different take on the movie's first nine minutes which would have kicked it off differently. There are two commentary tracks as well- one with directors Youssef Delara and Michael D. Olmos (Edward's son) along with director of photography Ben Kufrin, the other with star Gina Rodriguez and composer Reza Safinia. The first track focuses primarily on the basics of shooting the movie, while the second is primarily about the music score and songs used in the movie. Interestingly, in the first track it's mentioned that they've found it very hard to please critics, saying "but maybe it's because they see too many movies." I can certainly vouch for that with the amount of movies I've seen- when you've seen as many as I have, it's often hard to impress me. Although the second track had a few gaps where neither participant had anything to say, it was still interesting hearing Safinia explaining the music score while I was hearing it. I also learned that apparently some rappers are now referring to their performing as "spitting".

The disc opens with high-definition trailers in 5.1 sound for Luv, Something From Nothing: The Art of Rap, The Imposter, Flying Swords of Dragon Gate, and Wasted on the Young and also includes the Filly Brown trailer in hi-def with mono sound. 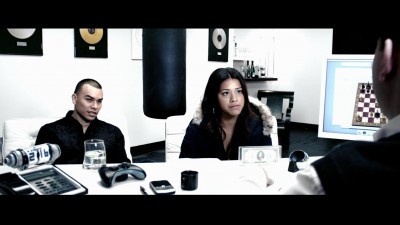 Yes, Filly Brown is rather clichéd and gives the feeling of something we've seen before along with a lot of loose ends after it's over, but its execution still makes it fresh and worthwhile.