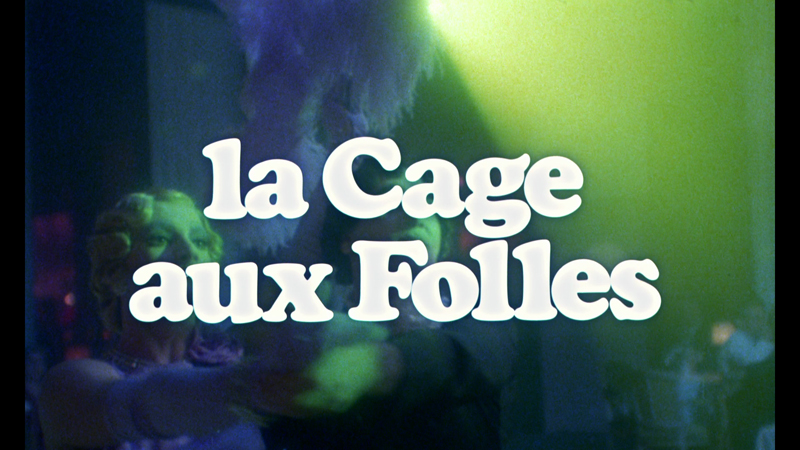 
The Movie
One of my all-time favorite films is The Birdcage, a broad comedy about a gay couple, one half of which is a drag caberet performer, while the other owns the nightclub he performs in. Their world is thrown into comic chaos when Laurent, the owner's son, pulls his new fiancee's archly conservative family into their lives, forcing them to pretend to be people they are not. It's a hysterical movie with a terrific cast, featuring Robin Williams, Nathan Lane, Gene Hackman, DIanne Wiest and Hank Azaria. The thing is, at the time, not being the more worldly cinephile I am today, I was unaware the movie was a remake of a French film, La Cage Aux Folles, which itself is an adaptation of a French stage play. It's status as a rermake doesn't make it less enjoyable, but I can't consider it the blast of fresh originality I once thought it to be.

The thing is, when revisiting the original film, starring Ugo Tognazzi and Michel Serrault, it's hard to separate it from the remake because the remake stayed very faithful, down to the dialogue and performances. I remember when I first watched La Cage, how I was certain that Azaria's flamboyant houseboy character of Agador was an American invention, only to see Benny Luke's Jacob appear in just a pair of glittery short shorts and I realized that perhaps Elaine May was more of an excellent adaptor than a brilliant creator. As Albin (and Zaza when in makeup), Serrault is the more effeminate of the pair, a bit of the stereotype of the emotional queen, while Tognazzi plays the far more butch Renato, who has to try to keep everything straight (pun intended) as they try to trick Laurent's in-laws-to-be into thinking he comes from a wholesome, traditional and certainly not homosexual background. 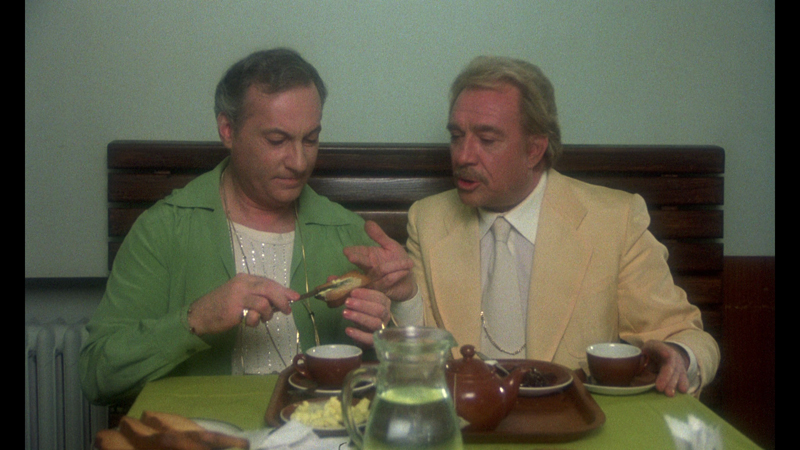 The culture clash is obviously where the comedy stems from, as Albin attempts to play it straight and they try to hide their obviously gay surroundings from conservative party official Simon and his upper-crust wife Louise. Simon is a coiled spring thanks to his boss finding himself in a compromising position, so he and his wife hatch a smart idea to confirm the party's family values via a grand wedding for his daughter and her fiance. Marrying into a drag nightclub family isn't in the plans though, so Albin and Renato have to try and unqueer their life by the time Simon and company arrive, removing their nude male statues and dressing their houseboy, but Albin will take quite a bit of work in order to pass for Laurent's uncle.

Though I am certainly no fan of Dan Futterman, who played the son in the American version, comparing the two performances, Laurent is very nearly the villain, as he, as the grown son of Renato, should know better and have more care for his parents, but he is unredeemable in trying to hide their true selves. That aspect is what raises La Cage (and The Birdcage for that matter) over your average broad, nearly screwball comedy. The sense of emotion instilled in Albin, who can be something of a cartoon at times, serves to hammer home the message of acceptance and family. Albin is doing nothing wrong and yet he is expected to change to make others happy. As one would expect, you can only suppress a natural force so long before it springs loose, and the big dinner meeting between the two families offers the big pay-off the film has been building toward, making for a hilariously classic segment (though the American version takes it a step further.)

La Cage is a very traditional comedy in many ways, dependant on dialogue to keep things moving from scene to scene, though director Edouard Molinaro lends it a European flair, from the opening tracking shot to the disco-like interiors of the nightclub, and even approaching the surreal, when the dinner party gets a very La Cage Aux Folles interruption. It's such a well-made gem of a comedy that it's almost unfair that Mike Nichols decided to remake it, and brought together such an all-star team in doing so. If The Birdcage had never been made, or if it hadn't been so good, La Cage would likely be seen in an even brighter light. 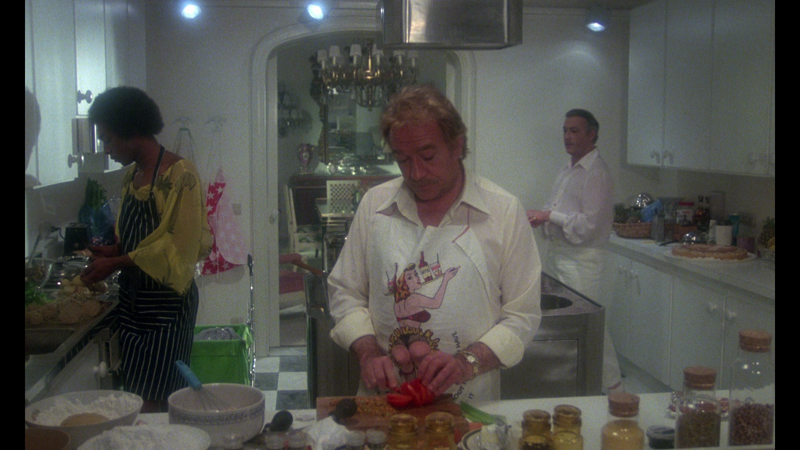 The Disc
Le Cage Aux Folles arrives on one Blu-Ray disc, in Criterion's standard clear keepcase, with an simple, yet attractive two-sided cover and an 16-page booklet. The disc, with that great Criterion standard menu, offers the option to watch the film, navigate the timeline, select chapters and check out the extras. There are no audio options but English subtitles are available.

The Quality
The 1.67:1, 1080p, AVC-encoded transfer, created from a 35mm interpositive received one of Criterion's customary extensive clean-ups, and the results are impressive, as the level of sharpness is rather high and colors are bright and appropriate (if just a touch muted) across the board. Thankfully, none of the work done on the transfer has negatively affected it or made for an unnatural look, as the film's grain and fine detail remains intact. For the most part, the clean-up has left the film almost spotless, but early on there's a distracting hair in the bottom of the frame on one angle for practically the length of the scene.

Delivered with a French 1.0 LPCM track, this film sounds crisp and clear, with dialogue coming off consistently legible, while the music is appropriately powerful, even getting a touch overbearing in spots. Though there's nothing very dynamic about the mix thanks to the format, there's also nothing negative about the track either.

The Extras
The extras begin with a new interview (18:33. in French with English subtitles) with director Edouard Molinaro, during which he reflects on his lengthy career behind the camera, touching on how he got started and his work along the way, collaborations with the biggest names in French cinema and the legacy of his biggest success. Molinar's not the biggest name in European film, thanks to his being known more for his comedies (which he was not quite as invested in) so this introduction is certainly appreciated.

Some interesting archival footage has been included of the play's original stars from their sketch comedy days and the original stage run of the show. "Les Anbtiquaires" (11:02), from 1959, has the duo play high-pressure antiques salesmen offering a customer a rapid-fire pitch, while "Le Monsieur Qui Veut Vendre Sa Voiture" (6:16) from later that year, sees a man trying to sell a car. Both are amusing, but "Le Monsieur" has better energy and could probably work on SNL today. They are followed by a 10:24 clip from a 1973 TV broadcast of La Cage Aux Folles, which lets you see some of the set design, a different Renato than most know and a scene that's quite different from what's in the film. .

As usual, Criterion goes beyond the expected in its bonus content to give a wider view of a film's subject matter, calling in professor Laurence Senelick, an expert on drag, to talk about the history of the art and the movie's impact on drag's place in modern culture. This relatively recent interview (22:47) is certainly academic in tone, but the info is fascinating, as the various eras, stars and controversies of drag are explored, and Senelick has a fine voice for such a lengthy presentation.

Wrapping up the on-disc extras are the French and U.S. theatrical trailers, which run a combined 4:05. The French version gives away far too much of the plot, while the US edition plays its cards far closer to the vest, never even showing any of the main characters, leaning heavily on narration and on-screen text, in a classic gambit to hide its foreign origins.

The 16-page booklet that comes with the disc, loaded with gorgeous illustrations of tyhe characters, features details about the release and "Folles Family Values," an essay by critic David Ehrenstein. The piece looks at the surprising success of the play and its following versions, and steps through the film's plot, lingering on some of the more memorable moments and performances, making for an interesting, if brief overview of the movie. 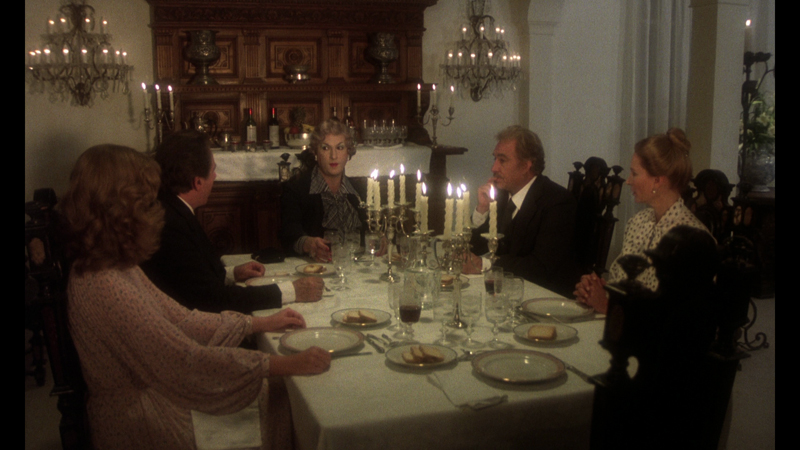 The Bottom Line
As someone who saw The Birdcage first and is more comfortable with English than French, the American adaptation is more enjoyable, but it all started with La Cage Aux Folles, a classic comedy of errors about what family is all about. The presentation here is solid, and the extras included make this well worth picking up, though anyone without an appreciation for ‘70s French cinema may want to stick with Williams and Lane. Theres nothing considerably better about this movie, it just did it first.