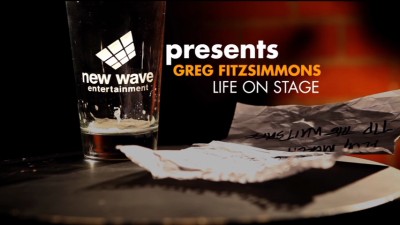 
The Show
In other stand-up reviews, I've made reference to the road comic, a tier of comedy act that is a regular at the Chuckle Huts and Laugh Cabanas across middle America, but who hasn't had that breakout in their career. So for every Bill Burr, there's a Greg Fitzsimmons, someone who isn't too different, but just didn't make that leap. Of course, in Fitzsimmons' case, that's probably not the biggest concern, as he can comfort himself with his four Emmys for his work on The Ellen Degeneres Show, not to mention his appearances on Howard Stern's show and his own popular podcast, which help him maintain a steady fanbase. Yet, at the age of 47 he had not yet had his own hour-long special, a situation rectified with Life on Stage, recorded in his hometown Tarrytown Music Hall.

Fitzsimmons' age informs his act at this point, focusing on some of the challenges of aging and being a family man. Thus you get bits about how his life is mostly behind him (particularly the way life gets worse as you get older), the loss of his hair and the need to utilize baby powder on his genitals. At times he can come off like an old man complaining, literally using the words "young people" on more than one occasion, but he thankfully doesn't wallow it it. In fact, he doesn't stick too long to any topic, moving quickly through various gags with the barest of segues. At one point he moves from abortion to marijuana to homosexuality, without much of anything in the way of connective tissue. He does come up with some funny notes though, like his observation about how the Hallmark aisle shows how much less you're cared about as you get older and America's strange relationship with water. 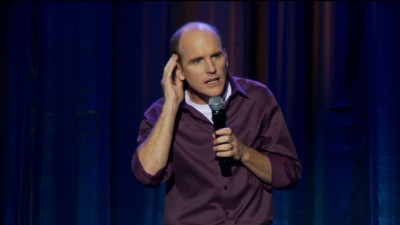 The oddest part of the special has to be when Fitzsimmons leaves the stage and enters the audience to play a game of "Guess the Asian," attempting to determine the Asian heritage of a number of women in the audience. The point of this bit is unclear, though it does tie in with a number of jokes that flirt with the edge of being politically incorrect, but pull up short and arrive in an area that could be described as somewhat hacky, like his issues with St. Patrick's Day. That's probably the difference between Burr and Fitzsimmons. Burr has set himself apart from the pack with his no-holds-barred style, while Fitzsimmons is another road comic unlikely to turn off too may audiences. 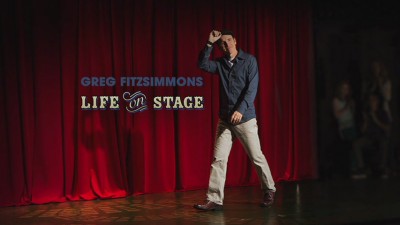 The Discs
Life on Stage comes in a two-disc set, with a CD and a DVD, which are packed in a CD-size three-panel digipack. The DVD features a static anamorphic widescreen menu with the option to play the specia. There are no audio options, no subtitles and no closed captioning.

The Quality
The anamorphic widescreen transfer offered for this show is good, but not great, as the heavily purple stage set-up can come off a bit soft, though colors and skintone are appropriate. There are no concerns about compression artifacts, but the overall presentation feels a bit less than you'd expect these days.

The Dolby Digital 2.0 track provided here handles the task of keeping Fitzsimmons' voice separate from the audience, but there's nothing dynamic about the mix, which is free of distortion. Everything is at an appropriate level as well.

The Extras
You could consider the CD to be an extra if you're getting this to watch the DVD. But that's it. 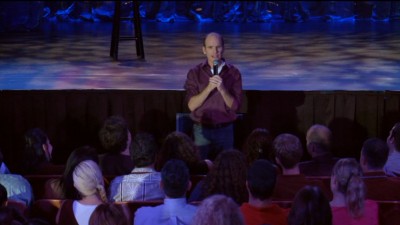 The Bottom Line
Fitzsimmons comes up with some rather clever ideas for his stand-up, like his view of debt, but the overall act isn't as funny as others', representing a tier of road comics who are competent but unremarkable. This special is presented in fine quality, but with no bonus content, making it a set meant only for Fitzsimmons fans.