Tad, The Lost Explorer, originally released in Spain as Las Aventuras de Tadeo Jones and appearing to be a fairly major release over there, makes a quiet Stateside debut in English on this release from Vivendi. Cleverly animated in CG, it tells the story of Tad Stones (named after the Disney animator and voiced in English by Kerry Shale), who has dreamed of being an archaeologist all his life. Although he's made friends with local archaeologist Professor Humbert (Mac MacDonald), the most adventure he can get into by himself is working as part of a construction crew and that doesn't last too long after he's fired for dreaming on the job. He gets lucky however when Professor Humbert gets a notice from his friend Professor Lavrov (also voiced by MacDonald) to meet him in Peru, as he's discovered the second half of a stone "key" that Humbert has had the other half of for a long time. They think it will unlock a hidden city filled with gold. Tad drives Professor Humbert to the airport, but due to a mix-up he ends up being the one to make the trip (along with his dog named Jeff.) In Peru he's picked up by Freddy (Cheech Marin), who has driven Lavrov's daughter Sara (Ariel Winter) to meet him. It soon turns out that a group of bad guys are after them to get the treasure for themselves, having already kidnapped Professor Lavrov and taken him to the site to help them. Tad, Sara, Freddy and Jeff then set out to rescue him, with the help of Belzoni, a parrot who can't talk so instead holds up signs saying what he's thinking. 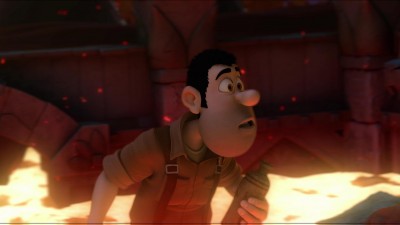 Tad, The Lost Explorer is very entertaining and quite impressive. While the animation isn't quite up to the level of Pixar, it's still very nice, giving just the right balance between cartoon-style and realism. Being in 3D, there are a few elements that recalled The Polar Express, such as a view of Tad's childhood bedroom and some action on top of a moving train. There are obvious homages to "Indiana Jones", he's even mentioned early in the film though Tad can't place the name. Cheech Marin's character provides most of the humor, with a running gag of him selling junk stashed in his coat because he has "a family to feed", evidenced by pictures of him taped on top of pictures of other families. The dog and bird provide great comic relief too of course. Although the story borrows from other adventure films, there are a number of surprises and most of the action sequences are spectacular, especially in 3D. 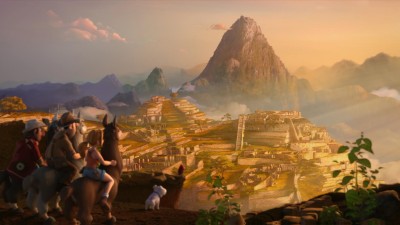 The AVC-encoded picture, in full 16x9 ratio, looks very good but just slightly below other CG animated films I've seen on Blu-Ray, mainly due to jaggedness in some details and some scenes looking just a bit artificially sharpened. Despite being on a dual-layer disc, I noticed some compression artifacts. The main draw here is the 3D, which is short on gimmicks but still very involving, with lots of depth in every scene making the viewer feel like they're really looking in on the action. (There is also a 2D option on the Blu-Ray).

A standard, single-layer DVD is also included, the picture looked rather soft compared to the Blu-Ray but still seemed quite watchable. 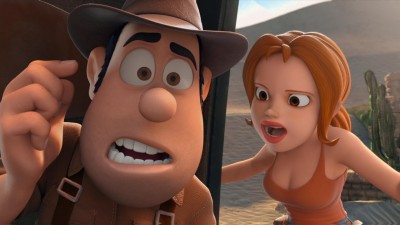 The 5.1 DTS-HD Master Audio track is on par with other modern animated films, with very clear dialogue and well-placed surround and LFE effects. It may not be "Indiana Jones," but still very impressive. A Spanish track in 5.1 DTS-HD Master Audio is also included, though I can't tell if this is the original track used for the movie's released in Spain or if it's been "Americanized" for audiences over here. The standard DVD includes both tracks in Dolby Digital.

The Blu-Ray includes English SDH subtitles, but they're only accessible during the 2D version. My player shows them available when playing in 3D, but the Subtitle button has been locked out and the menu will only let you turn them on when playing in 2D. The standard DVD includes only traditional TV-decoded closed captions. 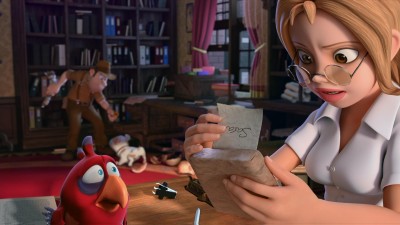 There have been a number of minor CG animated releases (foreign and/or straight to video) that were simply forgettable, but Tad, The Lost Explorer is a real treasure and in my opinion deserved a larger release in the US. While it's not quite Pixar quality, it's still very entertaining for kids and adults alike, and outdoes other larger CG productions I've seen, with good use of 3D that doesn't call attention to itself.