This Is The End 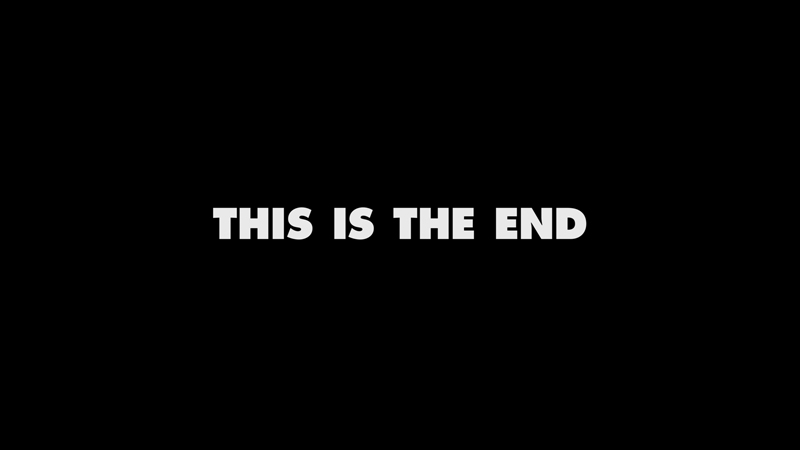 
The Movie
It almost seems like a joke unto itself. A bunch of Hollywood goofballs gather at James Franco's house as Judgment Day arrives on Earth. But under the guidance of Seth Rogen and Evan Goldberg, the guys who wrote Superbad, this scenario became the core of This is the End, which sees Franco, Rogen, Jonah Hill, Craig Robinson and Jay Baruchel, along with a host of other well-known faces, playing themselves as they face down the Biblical end of the world by holding down the fort at Franco's place. It's a meta-comedy wrapped in a horror film with the energy of an action movie.

When you have a gang of actors as polarizing as Rogen and company (maybe not Robinson, who most people flat-out love) playing slightly exaggerated versions of themselves, much of the film's success will ride on your view of them. It's as if the movie is a sequel to their lives, building on their years of work and celebrity, and if you missed the first part, you m,ay not get what's going on. Personally, this crew includes some of my favorite actors (no, not those guys) so this was an easy sell. That they play together well, and are more than willing to be ridiculous makes for a fun experience. Jonah Hill plays the most inauthentic version of himself possible, while Franco's portrayal lives up to most people's view of his quirky personality. But of all the big names who make appearances in this movie, including Emma Watson, Rihanna, Kevin Hart and Aziz Ansari, no one makes quite the same impact as Michael Cera. The term "playing against type" was made for his performance. 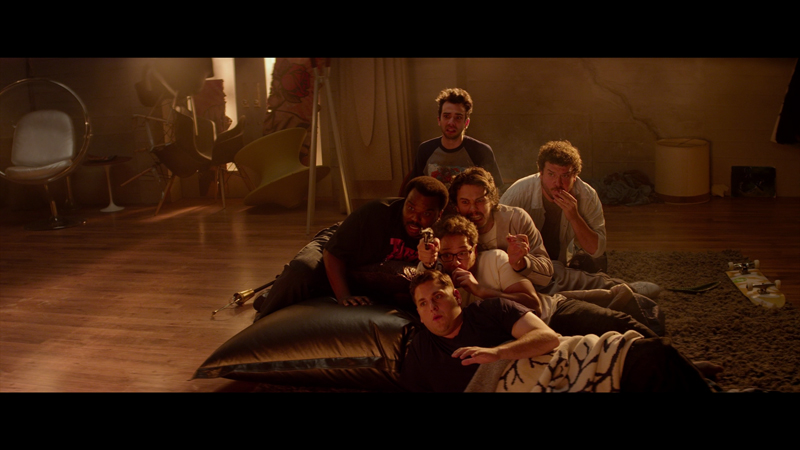 While the beginning of the film is all about the laughs, as it sets up a storyline between Rogen and Baruchel, a couple of Canadian stars with differing views of Hollywood, when the Rapture comes, it hits in a big, big way, and suddenly the film becomes legitimately scary at times, while trying to keep a foot in the world of funny, often trading on the fact that these actors are soft people who do soft work and they can't really fend for themselves very well. An attempted exorcism goes predictably, and gloriously wrong, while the presence of some legitimate demons from hell keep the dramatic stakes sufficiently high. Of course, with Rogen and Goldberg at the helm, writing and directing, even the most terrifying adversary is subject to being made the butt of a dick joke, which makes it a little harder to take the storyline very seriously (an extended screaming jag by Franco about indiscriminate ejaculate is probably the film's low point.) The mostly unnecessary and utterly unmotivated ending doesn't help either.

The film's biggest issue though is the way it struggles to balance the comedy and the action/horror elements. In fact, there's a rather obvious section toward the middle of the film where all momentum goes missing, which through no likely coincidence occurs with the arrival of Danny McBride, playing yet another jerk in a career made up of them. Everything I've read and heard says he's a lovely man, but this act wore out its welcome with me long ago. A late-game redemption (aided by the film's most out-there celebrity cameo, even moreso than Cera) doesn't fully negate his presence, and he doesn't help the film find its balance, as the comedy often stands starkly separate from the action, though there are certainly laughs to be found in the midst of the more dramatic moments. Fortunately, both sides of the equation are good enough at what they do to make the overall movie entertaining. 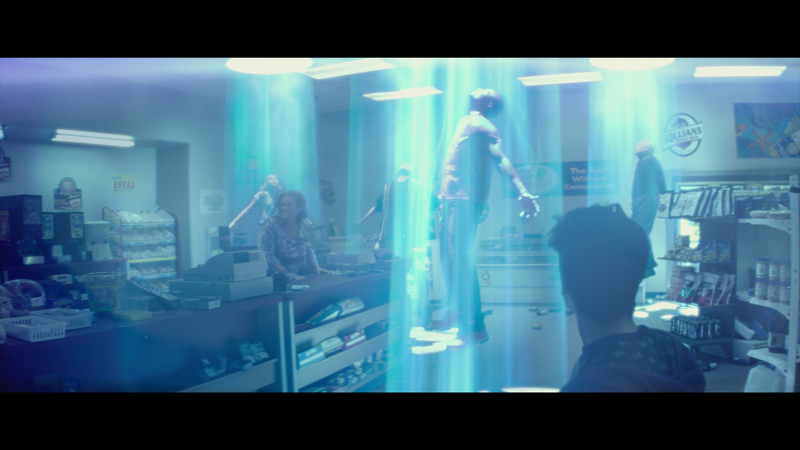 The Discs
This film arrives on a two-disc set (one Blu-Ray, one DVD) in a standard-width BR keepcase (which is inside a slipcover that repeats the cover art.) The disc features an static menu, offering the option to watch the film, select chapters, adjust languages and check out the extras. Audio options include English DTS-HD Master Audio 5.1, English Audio Descriptive Service 5.1 and French Dolby Digital 5.1 tracks, while English, English SDH and French subtitles are available.

The Quality
Though the box indicates this film was mastered in 4K, the 1080P, AVC-encoded transfer isn't going to blow you away visually, mainly because of the setting. Spending most of our time in the house, the film is exceedingly dark, and when outside, it's often covered in blurry smoke. But when you can see some detail, it's solid (especially during the end of the film when things get more interesting visually.) Color is appropriate throughout, capturing the film's extremes quite well, though black levels could stand to be a touch deeper. Overall, the film seems to be going for a "you are there" feel, and it achieves that, without any obvious issues with digital distractions.

Unlike most comedies, the sound is integral to This is the End, and the DTS-HD Master Audio 5.1 track helps drive home all the action in this film, exploding in the surrounds and bass when all hell literally breaks loose. Whether it's the screams of a demon in your face or the screams of victims suffering off-screen, it's all presented cleanly and well-placed, while the dialogue is consistently legible.

The Extras
Things get started with an audio commentary featuring Rogen and Goldberg, a track that's exactly what you're picturing, as the two long-time friends joke and talk about what it was like to make the movie, with a specific focus on how the actors differ from their characters, the vast amount of CGI in the film and how much improv was done. Eventually though it devolves into pointing out dick jokes and making fart sounds. However, if you like Rogen's sense of humor, here's 107 minutes (give or take one odd, seemingly edited dead spot) more to enjoy.

In addition to the commentary, two extras are found on both the Blu-ray and DVD release, and that's "Directing Your Friends" (6:30) and "This is the Marketing" (16:44). "Directing Your Friends" builds plenty of on-set footage around interviews with Rogen and Goldberg, who talk about their interactions with the cast in their new roles as directors, the creation of the story and characters, improv and their writing process. Remember these interviews, as you're going to see them again.

"This is the Marketing" is a collection of six pieces made to promote the film virally, including confessional videos (as seen in the movie), Rogen talking about the cast and a redband sizzle reel. The best part though is the nearly seven-minute long outtakes, which make fun of viral videos, with Rogen, Franco, McBride and Baruchel messing around and having a great deal of fun in a variety of dumb situations.

The Blu-ray exclusic bonus features start with "Meta-Apocalype" (7:43), a piece about how everyone is playing themselves, as expressed through interviews with the cast. Remember when I said to remember those interviews? The deja vu starts here.

Because of its focus, the 10:44 "Let's Get Techical" is more original, chatting with Rogen, the film's director of photography and the stunt coordinator, to talk about the effort that went into the production, including the way the film was shot, and a behind-the-scenes look at a big fire scene and some car crashes.

"Party Time" (12:54) is another relatively in-depth look at the production, this time focusing on the film's big party scene, and learn more about Cera's involvement, including a particularly painful experience with a co-star.

If the movie somehow didn't give you enough McBride, "The Cannibal King" (4:25) may be your thing, as it lets the man talk about his role, while also showing some alternate takes from one of his scenes. There's even more in "The Making of "The Making of Pineapple Express 2, a look inside a boredom-breaking home movie the characters make while waiting out the apocalypse. Your interest in the original Pineapple Express will largely decide your mileage here.

An interesting inclusion is Jay & Seth vs. The Apocalypse (9:58), the original 2007 short film that was remade into This is the End, with Rogen and Baruchel. Though the concept is very similar, the tone couldn't be more different. Made ariound the time of his break-out in Knocked Up, this short by the Undeclared alumni is an interesting work in progress.

Considering the amount of improv that apparently went into this film, it's surprising that only 12:34 of alternate lines from three scenes are available here, with one of the scene represented being the repetitive and honestly boring screaming match between Franco and McBride, which lacks cleverness. "This is the Gag Reel" (6:16) is only slightly better, highlighting the cast's screw-ups and general shenanigans, while an assortment of eight deleted scenes (15:52) is more substantial, offering more of Cera, extentions of scenes in the final movie and more of Rogen and Goldberg's patented filthy talk.

The disc extras wrap up with a bunch of other trailers, while you also get a DVD copy and an Ultraviolet stream/download code. 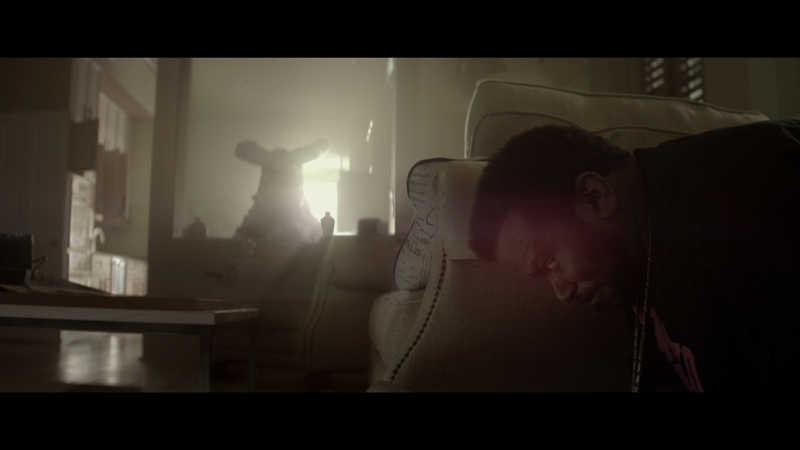 The Bottom Line
Is This is the End a good movie? It's not bad, but it's more of an insane horror/comedy spectacle, like a mash-up of Army of Darkness and Cannonball Run. But as those two titles suggest, it's one hell of a good time, rewarding viewers with some big laughs and manic action, before resolving in the kind of ending that would be infuriating if not for the ridiculousness that preceeds it. The disc looks good and sounds fantastic, and is loaded with bonus content, though there's a lot of repetition. If you're a fan of the stars, it's an easy recommendation, but if you can let go and laugh at over-the-top silliness, it's worth checking this one out.