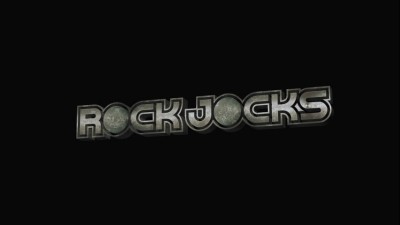 
The Film
Most indie comedies are happy when they cast someone audiences might recognize. To get a lead actor that engenders any kind of fandom is something of a minor miracle. That makes it all the more astonishing that writer/director Paul Seetachitt managed to fill the roster of his feature debut with a lead actress who's something of a cult goddess, a genuine viral video star, the leas actor of a recent studio comedy, and an assortment of industry vets. However, all that star power isn't enough to make a good movie, when there's this pesky thing called story to be considered,

John (TV journeyman Andrew Bowen) is a divorced dad who just wants to do the right thing by his son, but his job's demanding hours make it hard for him to be there when his son wants to do things like watch a comet. That's because John works for the government's Asteroid Management Initiative, a secret organization that remotely pilots satellites in order to destroy space rocks headed for a collision with the Earth. John works with a crew of misfits in a bunker falling apart due to budget cuts, and when he's called in on his night off, it's the last straw for him, so he checks out mentally. That leaves his team, lead by Alison (Felicia Day), the by-the-book member of the group, to fend for themselves when things go bad. And with a government budget manager visiting with an automated system ready to replace them, naturally things go very wrong. 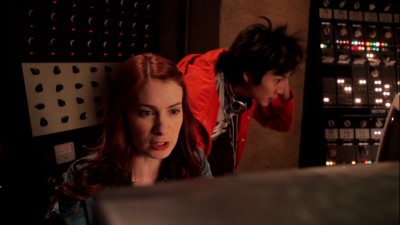 Though John is the star of the story, rookie asteroid fighter Danny (YouTube star Kenny Wu) gets his own arc, as he battles insecurities and the pressures of following in his perfect father's footsteps, challenges that are in his face in the form of the obnoxious Seth (21 & Over's Justin Chon), a pro-gamer who is constantly challenging his more delicate teammate. Seth's bullying naturally ties in with the team's struggles, and puts him in direct conflict with Alison, who refuses to accept his behavior and attitude. While they work out their issues, Tom Collins, the team's oldest and drunkest member (40-Year-Old Virgin scene-stealer Gerry Bednob) tosses in comedy bombs, a mysterious figure hangs in the background with his even-more-mysterious Rube Goldberg device, and Jason Mewes and Robert Picardo play a pair of chatty security guards without much to do.

That seems like a lot going on, but most of it is just distracting from the main story, which often takes a back seat to Danny's tale. The mix of plots has a negative effect on the tone of the film, which wants to be somewhat serious about John's family situation and the importance of the team's jobs (resulting in a loud, yet never very dramatic space battle), yet the presence of Seth opens the film up to plenty of scatalogical humor and the guards are just silly. Better balance between the two extremes might have helped make the flow of the story work better, but so much of what happens doesn't have much lasting meaning to the overall plot. That's unfortunate, because there are some genuinely funny people in this cast, and they get off some good lines, but overall it's rather forgettable, the kind of film you'll watch if it's on HBO at two in the morning. 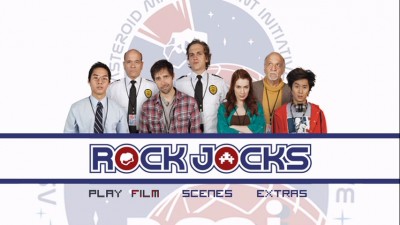 The DVD
A one-disc release, this film is packaged in a standard keepcase, with a static, full-frame menu that offers the option to watch the film, select a scene and check out the extras. There are no audio options, no subtitles and no closed captioning.

The Quality
The anamorphic widescreen transfer presents the film with good quality, delivering an appropriate color, a rather high level of detail and decent black levels (though more than one moment maxes out at dark gray. The idea of the unit being subjected to budget cuts covers some of the low-budget aesthetics, but the space scenes look surprisingly good. Everything is free of any compression concerns, making for a pleasing image,

The Dolby Digital 5.1 audio track keeps the dialogue clear in the center channel and feeds a near-constant stream of beeps and bloops to the surrounds, but when the big guns are firing, the sound effects are disappointingly limited to the center channel, while the surrounds get the score. There's nothing technically wrong with the presentation, but the mix isn't nearly dynamic enough.

The Extras
Though presented in three parts, the behind the scenes featurettes are really pretty much just one big reel of interviews, running about 12 minutes long. Most everyone in the film (plus the director) gets to answer at least one question, which are basics, like how did you get involved and who is your character. Of the bunch, Picardo is the most entertaining, because he plays off the fact that he's a veteran actor playing the part of "Guard 1."

Also included is the film's trailer. 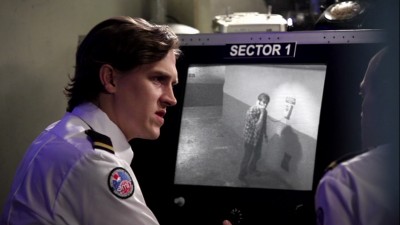 The Bottom Line
An impressive cast for an indie comedy is what raises Rock Jocks above similar productions, but the story and dialogue don't meet the level of talent on display, despite a fun concept. The quality is fine for the budget, though the extras are rather perfunctory, which makes it less likely you'll want to own this film. However, if you're a fan of Felicia Day, it's another opportunity to enjoy her, so it's worth a look for fans of down-to-Earth sci-fi.