Best of an Evening at the Improv 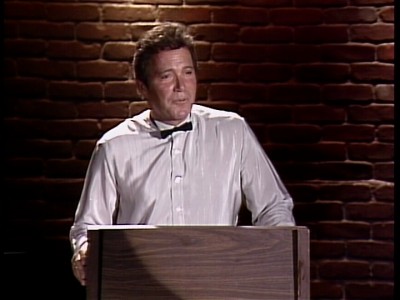 
The Show
I was too young to watch An Evening at the Improv when it aired, and I never saw it in any kind of syndication, so this set was an opportunity for me to discover some previously unknown stand-up history. Set in Budd Friedman's west-coast version of his Improvisation club, it was something like Saturday Night Live if you substituted stand-up sets for the sketches. Once Friedman welcomed the crowd, he handed off to a celebrity guest host, who then, after an opening monologue, introduced the evening's comics and musical guests. Interspersed though these segments were sketches with people in and around the club, mostly supposed employees of the Improv. It was an interesting mix of material, though the tone could be a bit uneven, as the hosts and musical guests weren't always comedic or fun, like Sally Kellerman singing a dramatic song about rainbows.

This collection doesn't offer episodes though, instead picking through the show's first 52 episodes to create a sampler of comedians, hosts, sketches and musical acts. It's unfortunate that they didn't include at least one full episode, so you could get a feel for how the show worked, and see some of the acts that weren't worthy of inclusion on these DVDs. Instead, this is a best-of set, where some episodes are represented by as many as five of the acts, while others are glossed over with just two segments. The hosts range from big names like Leslie Nielsen, a very funny Ed McMahon, Billy Crystal and Milton Berle, to odder choices, like Christopher Lee (also very funny, with his Looney Tunes imitations), mime act Shields and Yarnell and a variety of character actors likely to be unknown to anyone under 30. There's a decent variety of performers as well, though some, like Jerry Seinfeld, Howie Mandel, Paul Reiser and Arsenio Hall make multiple appearances in this set.

Watching these acts is a quick way to be reminded that stand-up comedy in the ‘80s was a very formulaic and often hacky world. Many of these acts rely on the tropes of the time, with plenty of jokes about homosexuality, the differences between the races and relationships. It's been quite some time since I've heard anyone use the term "orientals" about people without being completely ignorant or ironic, that to hear it used so often here was actually surprising. The way they approach race is similarly odd today, though to see Hall and Milton Berle spar comedically about the topic is amazing.

To be honest, at its best, which would include the performances by a young Seinfeld, Bill Maher, Michael Keaton (who most people wouldn't even know or think of as a stand-up), Robert Townsend, Kevin Nealon and the criminally under-appreciated Harry Anderson, the show never really rises above amusing, thanks largely to the combination of the performers' inexperience and some dated material. The many prop comics are often painful to watch, including the ridiculously manic Mandel, Gary Mule Deer and Bob Nelson, and most of the imitators, who even do the turn around and then back again thing, are just awkward, including the now terrific Maurice LaMarche, who gets to do his excellent Johnny Carson with Carson in the audience. For one imitator, Mark Halloran, who ends the collection with his tepid Woody Allen, bad George C. Scott, good Dustin Hoffman and unidentifiable Richard Dreyfus, my only note was "WTF" as the crowd offered little to no reaction. The true value in this set is not in the laughs though, but in the chance to see very successful comedians, like Jim Carrey, Bob Saget and George Wallace, when they were first starting out. This is a time capsule more than anything. 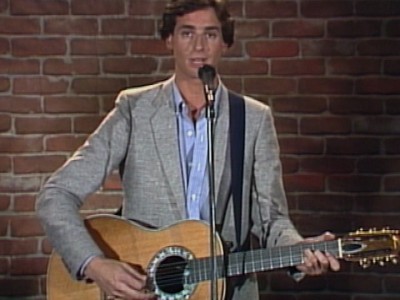 As far as the show's musical guests go, SNL this ain't, as the performers are mostly of the lesser-known variety (as well as being few and far between.) Yes, there's a song from Alabama (playing their classic "Mountain Music") and a version of The Spencer Davis Group, but the others are out of place (Amanda McBroom's emotional "The Rose"), odd (The Nylons' "The Lion Sleeps Tonight") or simply meh. The brief sketches involving the club's staff weren't much better, however they do feature early work by the wonderful Julie Brown and Andrew "Dice" Clay, so they are interesting to see.

The oddest thing about this set though is the box art, which lists many acts who were left out of the set, which is a mystery, considering the quality of some the acts that were actually included. Shown on the box art, with their names (so it's not just an illustration) are Paul Rodriguez, Flip Wilson, Richard Belzer, Larry Miller, Paula Poundstone, Shecky Greene, Keenan Wayans (who does appear, but not doing stand-up), Paul Reubens, Carol Leifer and David Steinberg. That's a rather large amount of acts to incorrectly represent as being a part of this set. That we instead get acts by Rick Podell, Sheryl Bernstein, Jimmy Aleck and others makes it even more of an egregious act of false advertising.

Here's a breakdown of who's included in this set: 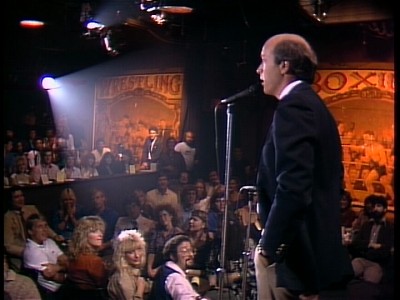 The DVDs
A four-disc release, this set is packaged in a double-width black keepcase, with two dual-hubbed trays, which is inside a slipcover that repeats the cover art. The disc features static, full-frame menus that offers the option to play all the episodes, select a host, select a comedian or watch the musical acts. There are no audio options, no subtitles and no closed captioning.

The Quality
The full-frame image on these episodes is just what you'd expect for a series shot on video in a dark nightclub in the ‘80s, with that soft, over-saturated, yet somehow muted look that is unique to that time frame. On the plus side, the tapes are surprisingly clean, with some occasional video defects along the edges, while there are no notable issues with compression artifacts.

Though the box indicates PCM Stereo tracks, the disc reads as Dolby 2.0, but either way, the presentation is fine, keeping all the voices clear (as long as the recording was good to begin with, as some comics had a bit of mic problems.) Everything is front and center, and you shouldn't expect anything interesting from this audio.

The Extras
There are no extras in this set. 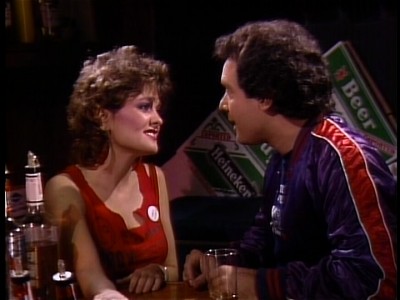 The Bottom Line
You're not likely to find a lot of laughs in this dated set, but there's a whole lot of nostalgia to soak in, as you can check out early sets from some of the biggest names in ‘90s comedy, plus appearances from some comedy legends and stereotypical ‘80s comedy routines. Considering the surprisingly good quality, for the right price this is an excellent collection for comedy nerds; though more a historical document than hilarious retrospective.