PBS // Unrated // October 1, 2013
List Price: $99.99 [Buy now and save at Amazon]
Review by Stuart Galbraith IV | posted October 10, 2013 | E-mail the Author
Friends have been raving to me about Downton Abbey (2010-present), the British (and partly American-financed) television drama contrasting the lives upper- and servant-class residents of a large manor house in post-Edwardian England. I had been meaning to catch up with it eventually and gradually but, perfect timing, along comes PBS's release of Downton Abbey: Seasons 1, 2 & 3, a terrific Blu-ray boxed set of all 25 episodes covering the first three seasons, including two Christmas special shows (running 92 minutes apiece) as well as an extra Blu-ray disc called Secrets of Highclere Castle, a documentary about the location where the series is filmed. Happily, the episodes in this collection are the original UK cuts, and not the obscenely edited versions that originally aired on PBS. (The first series apparently lost two of its original eight hours. Good grief.) If you've missed Downton Abbey up to now, as I have, this is a great way to see the program and I heartily recommend this set.

Overall, the show is extremely impressive in terms of its superb ensemble cast and gorgeous production values. The character-driven teleplays are likewise engaging, intricate, and fascinating on many levels.

From Downton Abbey's opening scenes, I was struck by its innumerable similarities to Upstairs, Downstairs, both the original series that aired over 68 episodes from 1971 to 1975, and the sadly short-lived 2010-2012 revival series. While it's fair to say any post-Edwardian drama about servants and their masters is bound to coincidentally cover much of the same territory - consider much of Merchant Ivory's output - the similarities are myriad and the unusual circumstances surrounding the creation of Downton Abbey are impossible to ignore. Even ITV press material and merchandising for the show freely uses the terms "upstairs" and "downstairs" in describing the show, reminding viewers of the similarly acclaimed and internationally popular show that preceded it.

One subtle difference between Downton Abbey and Upstairs, Downstairs is sociopolitical. The original Upstairs, Downstairs was largely tragic: the servants often suffered horribly at the hands of their employers, who in turn led empty, generally unhappy lives no matter their wealth, and the viewing audience largely identified with the servants, not their masters. Downton Abbey, created by Julian Fellowes (Gosford Park), an actor-writer and Conservative member of the House of Lords, paints a much more sympathetic portrait of its privileged-class family, while the main antagonist, during the first season anyway, is a conniving homosexual servant. The viewing audience, meanwhile, is invited to specifically identify with the ordinary middle-class man unexpectedly named heir to the huge estate and its fortune. One of the many season-long story arcs follows his seduction into the elite class.

The "Limited Edition" set consists of nine Blu-ray discs. The shows look and sound great, the extra features are generally good, and the packaging is well designed. 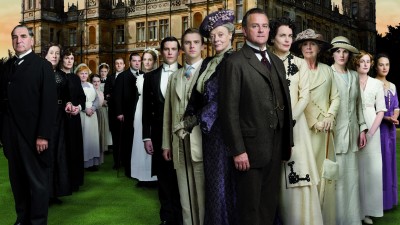 The series begins with news of the sinking of the Titanic in April 1912, in which the betrothed of eldest daughter Mary has drowned. This creates a logistical crisis for the Crawleys. Without a male heir, Lord Crawley cannot legally bequeath Downton Abbey to eldest daughter Mary and instead the estate must eventually be handed over to a distant third cousin, middle-class lawyer Matthew Crawley (Dan Stevens). He initially wants nothing to do with the estate and rejects aristocratic living. However, at the urging of his pragmatic mother, widow and former nurse Isobel Crawley (Penelope Wilson), they travel to Downton Abbey and he reluctantly agrees to prepare to inherit the estate. Lord Grantham considers the turnover inevitable, despite the Dowager Countess's loud protests, while Lady Grantham and others hurriedly try to find fickle Mary a suitable husband and push for a legal route for her to inherit her family's fortune and retain control over Downton Abbey.

A revival of Upstairs, Downstairs had been in the works beginning around 2007. The original series had aired on Britain's ITV network, but they declined to finance the revival and so instead it was produced and broadcast by the BBC. Meanwhile ITV, having rejected the revival, opted to create its own post-Edwardian drama about aristocrats and servants living under the same roof, and thus Downton Abbey was born. Downton Abbey premiered first, on September 26, 2010, while the revived Upstairs, Downstairs debuted a mere 13 weeks later, on 26 December. "'We were trying to sort out... 40 years of rights and then [ITV] also started Downton Abbey," co-creator and Upstairs, Downstairs star Jean Marsh said, "So it might be a coincidence and I might be the queen of Belgium."

While many basic similarities can be chalked up to conventions of the genre, such as its setting and stock characters, in other respects Downton Abbey is a near-clone (Marsh described it as a "facsimile"), with characterizations and specific situations seemingly lifted whole-cloth from both the original and the first season revival of Upstairs, Downstairs, script material presumably ITV had access to in some form when that version of the show was under consideration.

Ironically, it was the revival of Upstairs, Downstairs, airing on the heels of Downton Abbey, that was accused of imitating the other, not the other way around. Despite initially high ratings, the revival struggled to find an audience amidst harsh criticism and it was cancelled after just two seasons, its second year further compromised when Jean Marsh suffered a stroke and her participation was limited to just two brief, cameo-like appearances.

Where the original Upstairs, Downstairs presented a predominantly bleak view of post-Edwardian aristocracy and its oppressive class system, Downton Abbey looks at this same era with a longing, rose-colored nostalgia, akin to the pre-Civil War South as depicted in Gone With the Wind. While Lady Mary and the Dowager Countess, among others, are at times comically insufferable, unfeeling snobs toward to the middle and lower classes, Matthew's Lotto-like jackpot is clearly meant to appeal to today's unwashed masses and their pipe dreams of sudden wealth. The first season-long story arc involving Matthew is, in essence, a seduction, set in a fairy tale castle, Cinderella with a sex-change.

And while viewers of the original Upstairs, Downstairs undeniably became emotionally invested in the Bellamys, those living "upstairs" at 165 Eaton Place, Downton Abbey identifies much more closely with that show's titled family. "While I certainly sympathize with the servants," one friend told me, "I'd rather be one of the Crawleys."

On its own terms, Downton Abbey is highly enjoyable. The original Upstairs, Downstairs was shot on smeary videotape, and almost entirely on modest soundstage sets, where Downton Abbey is in high-def and filmed mainly in and around Highclere Castle, a veritable monument to British aristocracy. It's an undeniably lush and visually mesmerizing location. I don't know what Downton Abbey's budget is, but wouldn't be surprised if a single episode cost several times an entire season's worth of Up Down episodes.

Ultimately though, it's the impeccable acting that sells the show. The ensemble cast is uniformly excellent, with Maggie Smith, Jim Carter, Brendan Coyle, and Joanne Froggatt standing out. It's also nice to see American actress Elizabeth McGovern (Ordinary People, Once Upon a Time in America) an even better actress than she was 30 years ago, and more beautiful than ever, she having moved to London after marrying British director Simon Curtis in 1992. The show is unusually well cast: as pivotal character Lady Mary, Michelle Dockery physically resembles both McGovern and Hugh Bonneville.

Downton Abbey: Seasons 1, 2 & 3 is a package within a package. An inner box contains the show's first three seasons in individual cases: two discs for the seven-episode first season, three discs of eight episodes and one special for seasons two and three. Presumably they are identical to individual season sets released earlier. The 1.78:1 1080p widescreen transfers look great, with a wide and varied pallet of colors and excellent detail. Audio is 2.0 English DTS-HD Master Audio, supported by optional SDH subtitles (English only). The outer packaging contains the extra Blu-ray disc, Secrets of Highclere Castle.

Supplements include (for Season 1): "Downton Abbey: The Making Of" and "Downton Abbey: A House in History." Season 2 includes three featurettes, averaging about 10 minutes in length: "Fashions & Uniforms," "Romance in a Time of War," and "House to Hospital," and Season 3 includes seven plus a behind-the-scenes special, "Downton Abbey: Behind the Drama" (running 48 minutes). The featurettes are [Guest Star] "Shirley MacLaine at Downton Abbey," "The Men of Downton," "Downton in 1920," "Behind the Scenes: Cricket Match," "Behind the Scenes: Journey to the Highlands," and two others I won't name as they give away plot points. The extra disc is a Region A encoded, 60-minute documentary in 1.78:1 widescreen and 1080i, "Secrets of Highclere Castle."

Despite plot developments, characterizations, and other situations uncomfortably similar to those found in Upstairs, Downstairs, on its own Downton Abbey is certainly enjoyable and in many ways extremely well done. And this Blu-ray set is the ideal way for those not yet up to speed on the series to catch up with it, and is therefore Highly Recommended.