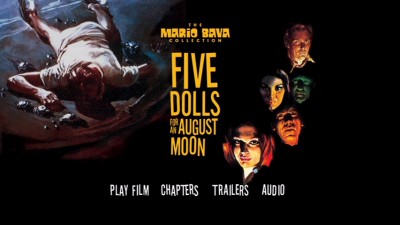 Mario Bava's 1970 island-based murder movie Five Dolls of an August Moon (a.k.a. Island of Terror) is a bit of a non-starter in terms of plot. There's more to recommend in terms of aesthetic and approach than anything else--which, depending on what you're after, may be enough.

The story, loosely based on Agatha Christie's And Then There Were None, features four wealthy couples and one hanger-on (Ely Galleani) vacationing together and playing at being pagans on a remote location in the middle of the ocean. Three of the men are trying to convince the fourth, a professor and inventor (William Berger), to sell them the formula for a revolutionary industrial resin he invented. Figuring they will trap him until he relents, they send their boat back to the mainland, leaving him with no option for going home. Once they are all stranded, however, someone starts murdering their group, beginning mostly with the wives, basically carrying on with the "virgin sacrifice" party game that the movie opened with.

There's some groovy fun to be had from Bava' mod art direction and the persistent, incongruous score by Piero Umiliani (Kiss Me, Kill Me). Both have gone from cutting edge to kitsch in the decades since but it's still pretty cool to see space-age spiral staircases, clothes with lots of flair, and furniture right out of Austin Powers' bachelor den. Tonally, the look and sound of the film works well going against Five Dolls' grisly subject matter. Though most of the killings take place off screen, the crime scenes are bloody and, in the case of the murder of the group's beauty queen (Edwige Fenech), unsettling and sexual. Presumably, the dolls in the title are the corpses hung in the freezer to preserve them for the police. 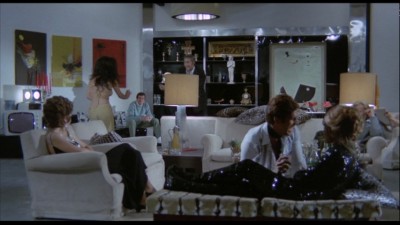 As the numbers dwindle, however, so too might your interest. Bava, working from a screenplay by Mario di Nardo, doesn't really seem all that concerned with building a mystery, and when explanations do come, they either contradict what we've seen, or in the case of the denouement, make no sense whatsoever. Without any sustainable suspense, the whole thing kind of fizzles, making Five Dolls for an August Moon little more than a colorful realization of style. 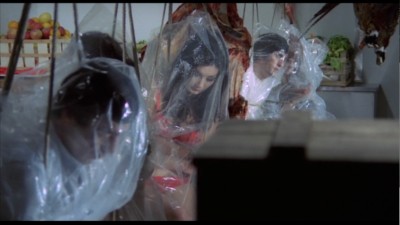 Video:
The image quality here is fine, even if the restoration looks a little muted. The transfer, shown at a 1.78:1 aspect ratio, is mostly free of extraneous marks or dirt, and it appears intact, with no noticeable skips or jump cuts. Colors are warm, and shadows are adequate.

Sound:
Kino has mastered Five Dolls from a print of the English-language version, and the sole language option is the Engish dub in stereo. The remix is mostly decent in terms of tone and volume, though there were a handful of static-filled glitches at intervals throughout the film.

There are also trailers for other Bava films Kino has released.

FINAL THOUGHTS:
Rent It. Certainly not a terrible film, but this colourful effort from Italian horror master Mario Bava is lacking in protein. Five Dolls for an August Moon tells a slight, jumbled story about vacationers on an island who begin to die one-by-one at the hands of an unseen killer. The art direction has style to spare, but the solution to the mystery is a disappointing mess. 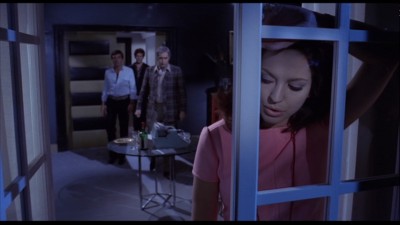