Drums Along the Mohawk


Please Note: The stills used here are taken from an earlier DVD release, not the Blu-ray edition under review. 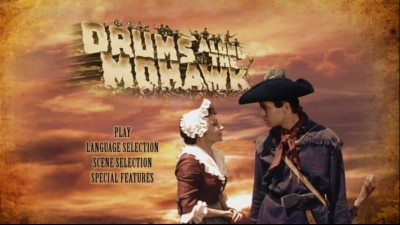 John Ford's first color film, Drums Along the Mohawk, is an interesting blend of his family pictures (How Green Was My Valley) and more traditional westerns (Stagecoach, Rio Grande)--despite not really being a cowboy picture at all. At least not technically.

We are far from the wild west and open plains here. Instead of the vast desert or the untamed midlands, Drums Along the Mohawk is set in upper state NY at the outset of the Revolutionary War. Henry Fonda plays Gil Martin, a newlywed taking his bride Lana (Claudette Colbert) from her family home in Albany to his farm and the cabin he built with his own hands in the Mohawk Valley. No sooner have they settled into married life and gotten their house in order than they are attacked by Mohawk warriors who have sided with the British. They burn everything to the ground, sending the couple and their neighbors scurrying to the nearby fort, the only law-enforcement or protection for miles.

The settlers drive away their enemy, and the Martins pick up the pieces, hiring on to work the ranch of a widow (the incredible Edna May Oliver) who lost her previous employee to an epic drunken bender. Isolated as they are from life down south, the community mostly gets by without the war touching them, at least not until the men are called down to fight. They return worse for wear, but momentarily victorious. 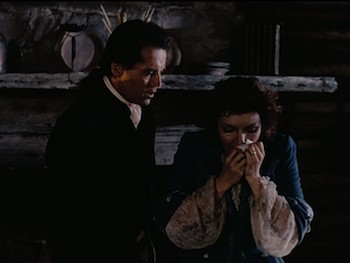 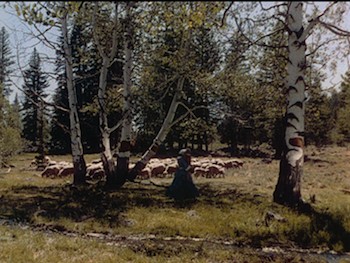 It should be noted that pretty much all through these first couple of acts, the violence remains offscreen. It is a plot motivator or, in some cases, used for strange comedy (the widow insisting her Native American attackers take her bed out before they set her house on fire, and even instructing them on how to get it through the door). Though there is actual combat to come later, Drums Along the Mohawk's most violent sequence is really a monologue Fonda delivers, describing a real battle his character would have participated in. It's a tour de force played with quiet heartbreak and a painful brand of pride, orchestrated as an intimate moment between husband and wife, affirming their commitment even while another man is dying just in the next room.

As rich as it is in history, and as tense as the final act becomes, Drums Along the Mohawk is really about building a family, albeit one with many extensions. The widow becomes the de facto head of household, and other neighbors, such as the gregarious farmer played by that largehearted bear Ward Bond, replace the kin Lana left behind. Metaphorically, this is an illustration of the mythology of early America, a history that Ford returned to time and again. The community comes together to defend their land, but they are part of the greater fight to shrug off foreign powers and form a more perfect union. It's an effort that will require everyone. The women put on army jackets so the other side sees them as soldiers, and aren't they really? As with all Ford, there is some racist caricaturing. The Mohawk's are whooping savages, either killing machines or drunks. Then again, so is the Tory (John Carradine) that leads them. He is such a cartoon villain, he even wears an eyepatch!

Ford may be old-fashioned, but neither he nor his politics can be dismissed outright. I think he tends to be more complicated than some detractors and even supporters suggest. There are progressive elements to his movies, or at the very least some semblance of inclusiveness. It's not for nothing that an African American woman and a Native American man are there at the end of Drums Along the Mohawk for the victorious raising of the Stars and Stripes--though, granted, it would be hard to deflect the argument that both were there because they went along and got along. Even so, Ford was a least striving for some kind of unity, and as his body of work moved across the map, he was depicting a singular America where folks had to look out for each other, be they in the seat of power (Young Mr. Lincoln) or completely destitute (Tom Joad in The Grapes of Wrath). It's also no real coincidence that both examples feature American-everyman Henry Fonda in the starring roles, and performing to much better effect than he does here. As an actor, his stoicism is the trait that made audiences trust him, but he fails to make Gil much more than a stuffed shirt (my single biggest complaint about Drums). 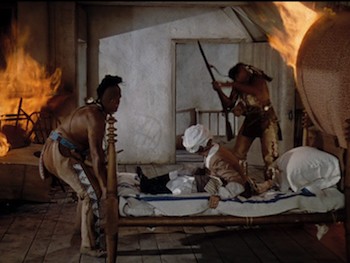 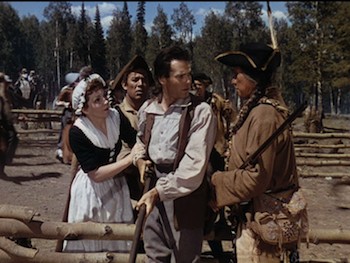 Of course, much of the director's love for his country is a literal love of its scenery. Ford embraces Technicolor here, and with the help of cinematographers Ray Rennahan (Duel in the Sun) and Bert Glennon (They Died with Their Boots On), he captures all the beautiful greens and blues of the Northeast countryside and its expansive skies. You can see him tossing odd bits of color around, using it as background detail. Edna May Oliver's patterned skirt, or the twigs in Ward Bond's hat, add an extra splash of color while also maybe representing their individual spirits. And then there is the famous climactic scene of Gil running for help, the orange sunset lighting up the horizon behind him, the burning flames of his homestead urging him to carry on with his mission.

It's the film's peak in terms of action, with Ford saving the actual finale for the emotional payoff that will come when husband and wife are inevitably reunited. The core the Martins have been forging solidifies, and American independence means they can live as they choose. It's certainly got a touch of propaganda to it, but at the same time, Drums Along the Mohawk ends up feeling like a battle hard-won, a grand legend that was wholly earned, and just like the America it seems to glorify, it comes with warts and all. 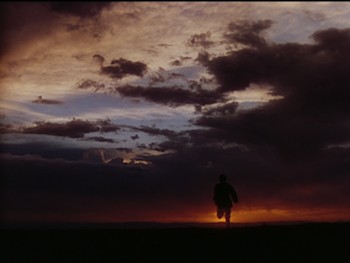 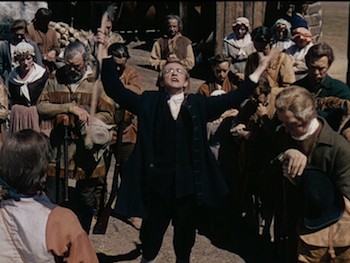 Video:
The high-def transfer for Drums Along the Mohawk looks really good, with a clean picture and only a few instances of scratches or other damage. Colors are vivid, but the Blu-ray also preserves the look of the original film stock, allowing for that almost painterly look, with impressionistic shapes and hues that at times look as if they might actually spill outside the lines. Grain is steady, and detail consistent.

The movie is shown at a 1.33:1 aspect ratio in 1080p. Bonus content is standard definition.

Sound:
The mono DTS-HD master audio remix of the original audio soundtrack sounds fantastic, with warm tones and no signs of extraneous noise, drop-outs, or glitches. Music sounds fine and clear, and dialogue is easy to discern.

Subtitles are available in English for the deaf and hearing impaired, for both the main feature and the bonus documentary, Becoming John Ford. That added film has a 2.0 DTS-HD MA track.

Extras:
Twilight Time has included a booklet with excellent liner notes by Julie Kirgo. Kirgo also appears on the informative audio commentary, along with Nick Redman, who also directed the bonus documentary as detailed below.

Most substantial, however, is the smart addition of the excellent 2007 documentary Becoming John Ford originally made by Redman to go along with the massive Ford at Fox collection that was released a couple of years back.

Reverential in tone, Becoming John Ford chronicles the arc of the great filmmaker's early career. He began by shadowing his brother Francis Ford on the set of the silent movies the older sibling directed, which eventually allowed John to transition into directing his own silent features. When Darryl F. Zanuck's nascent 20th Century Studios merged with Fox, Ford became a contract director at the company, beginning a fruitful relationship between the studio head and his artist that was often contentious but also one built on mutual respect. Under Zanuck, Ford made many of his most famous pictures and won two Oscars. When World War II broke out, both men joined the war effort, with Ford helming a film unit that chronicled the efforts of the U.S. troops.

After the war, both men resumed their previous positions, though the movies they made had a new gravity. Unfortunately, disagreements over the film My Darling Clementine would prove too much, and John Ford ended his relationship with Zanuck and largely moved on from Fox. There was no changing the storyteller within him, he just chose to apply his skills elsewhere.

Becoming John Ford is an entertaining documentary, though a little staid. Clips of Ford's movies are used sparingly, giving more camera time to the biographers and historians that tell the stories of what went on behind the scenes. It's not that I wanted what they said cut, as the theories and anecdotes they share are very interesting, it's just that we could have seen more from the archives rather than the person speaking. In addition to relating biographical information, they also try to get at what makes a John Ford production tick, discussing the manner in which the master conducted himself and his primary themes, such as tradition, family, and Americana.

The stand-out participant is probably Peter Fonda, the son of Henry Fonda, one of Ford's most notable collaborators. (Probably only John Wayne is more associated with the director.) Fonda has a unique perspective, having witnessed both his father and Ford at work when he was just a young boy.

Redman's documentary is tightly constructed and well-paced, covering a lot of ground in a short amount of time. Ford enthusiasts will enjoy the deconstruction of many of his more famous releases, and initiates to the Ford aesthetic will walk away with a long list of DVDs to add to their viewing queue.

Finally, the theatrical trailer from Drums Along the Mohawk is also included, as well as a peek at the Twilight Time catalogue.

FINAL THOUGHTS:
Highly Recommended. John Ford's 1939 Revolutionary War drama Drums Along the Mohawk is an intriguing, entertaining blend of interpersonal drama, action, and the kind of frontier mythology the director was so fond of. Led by Henry Fonda and Claudette Colbert as newlyweds whose plans for setting up a home and farm are derailed by the British and their Native American allies, this story of early American stoicism is carefully crafted, at times inspiring and also sobering. It is, ultimately, its own metaphor for what Ford saw as the essential qualities of his countrymen: determination and community. 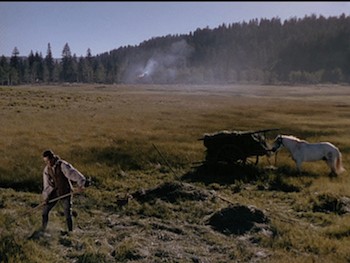 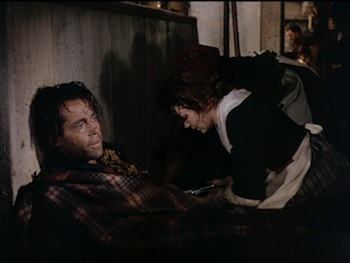