Ain't In It For My Health

Kino // Unrated // October 8, 2013
List Price: $29.95 [Buy now and save at Amazon]
Review by Stuart Galbraith IV | posted October 15, 2013 | E-mail the Author
Ain't In it For My Health (2010) is a captivating, intimate documentary about the last years of Levon Helm (1940-2012), pivotal founding member of The Band, as he struggles to create new music while battling throat cancer, slowly recovers from bankruptcy, and tries to come to terms with lingering bitterness toward Band-mate Robbie Robertson and the money-driven music industry he represents. Most of the film is set in and around Helm's rural Woodstock, New York home, recording studio, and The Midnight Ramble, the cozy performance space he and his family established to ward of creditors. It's in that cocooned environment where Helm and like-minded musicians and family members perform - and smoke lots of weed - and where the film really gets inside Helm's warmly welcoming yet unsentimental communal world.

Like a lot of viewers, I was familiar with Helm primarily as The Band's drummer and vocalist, and for his occasional acting roles, notably in Coal Miner's Daughter and The Right Stuff, in the latter playing test pilot Jack Ridley to Sam Shepard's Chuck Yeager. "Hey, Ridley, ya got any Beeman's?" "Yeah, I think I got me a stick." The movie never mentions Helm's acting career while adamantly favoring his present activities to his past association with The Band, all to good effect. It inspired me to rush out and buy his acclaimed 2007 album, Dirt Farmer.

Kino's Blu-ray is a good one, with 5.1 audio serving the music well, and which includes a bevy of worthwhile deleted scenes. 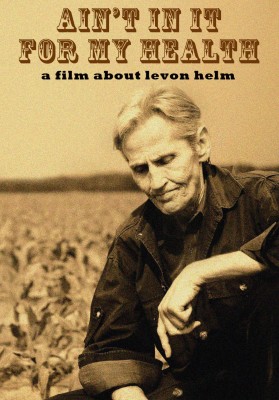 The film's relaxed tone is established in the very first shot of Helm, sitting in a rocking chair smoking a joint. Except when he's drumming or visiting the hospital, pot is an almost constant presence. Most of the film seems to have been shot in late 2007 and early 2008, when Dirt Farmer, Helm's first studio album in 25 years, is nominated for a Grammy as Best Traditional Folk Album. This delights Helm, but another Emmy accolade troubles him: The Grammys also announce a Lifetime Achievement Award for The Band, and Helm doesn't quite know how to respond.

The five-man group, a "bar band" of "country boys" as the film describes them, consisted of Helm, Robertson, Rick Danko, Garth Hudson, and Richard Manuel, all multi-instrumental artists. The Band was enormously influential but also one of a kind, their mix of country, rock, Americana, and R&B influences (from Bob Dylan to Curtis Mayfield) a stark contrast to most of the performers at Woodstock. As The Band, the group was together for about ten years, creating iconic songs like "The Weight," "The Night They Drove Old Dixie Down," and "King Harvest (Has Surely Come)" while on the road they indulged in every recreational drug imaginable, including heroin. Such was their intake that Robertson eventually approached Helm, concerned that drugs (along with alcohol) were destroying everyone's health. "I ain't in it for my health," Helm replied, a kind of anthem expressing every dedicated musician's need to create superseded all other concerns.

The group eventually disbanded, after that famous final concert documented in Martin Scorsese's The Last Waltz (1978). But the euphoria over that last performance quickly soured when it became clear that Robertson and Robertson alone retained The Band's lucrative publishing rights; other members of The Band were shut out and due only much lower performance royalties, this despite the fact that group's biggest hits were collaborative efforts. Manuel committed suicide in 1986 and Danko died of heart failure in 1999, while Hudson and Helm struggled financially. In 2002 Robertson bought out Hudson's, Danko's, and Manuel's interests in The Band but Helm refused.

Helm's bitterness is on display when visited by actor Billy Bob Thornton, who grills Helm about The Band's various albums and Helm responds with polite but distant answers. Eventually he dismisses the Grammy's "honor" as a cynical attempt by Robertson and the industry to wring more money out of The Band's memory and refuses to participate.

Meanwhile, Helm struggles with his health. Diagnosed with throat cancer in 1998, at 67 Helm is alarmingly aged and frail looking, a wispy scarecrow of a man. His distinctive, unique singing drawl is rich and robust in the film's early scenes, but soon it's a hoarse whisper and he undergoes extensive medical tests, including several wince-inducing endoscopies. In one scene a vocal coach guides Helm through "Amazing Grace," and it's painful to watch him struggle through it.

And yet, Levon Helm soldiers on, developing tracks for his follow-up to Dirt Farmer, Electric Dirt (2009), playing music and socializing with fellow musicians and extended family members, quietly contemplating previously unpublished, half-finished lyrics by Hank Williams, marveling at the violent opening sequence from Sam Peckinpah's The Wild Bunch (part of the Peckinpah DVD set he received as a gift from his producer-collaborator Larry Campbell), and complaining loudly about the broken American political system. (Watching George W. Bush's State of the Union Address Helm, smoking an ever-present joint, shouts, "God help America!" at the TV.)

Ain't In It For My Health is presented in 1080p 1.78:1 widescreen. Shot on digital video, the image is reasonably good, though it's the 5.1 surround audio that really delivers the good, with all the performances sounding terrific. A 2.0 stereo track is also offered, though no English or other subtitle options.

Supplements include a solid 50 minutes worth of deleted scenes, many priceless bits that didn't fit anywhere in the main feature. Be sure to check out Helm's delight watching a DVD featuring The Evolution Revolution, the all-chimpanzee rock band from Lancelot Link, Secret Chimp. A trailer is also included.

If director Jacob Hatley's goal was to expose viewers to Helm's rich solo career while painting a portrait of a great American musician valiantly "hanging onto his art for dear life" (as The Hollywood Reporter's Daniel Carlson aptly put it), then Ain't In It For My Health succeeds completely. Highly Recommended.