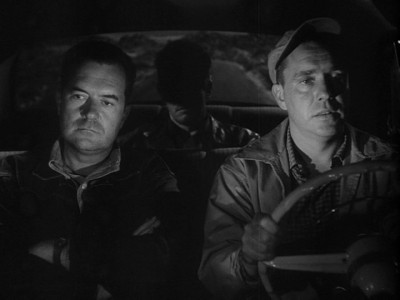 "This is the true story of a man and a gun and a car. The gun belonged to the man. The car might have been yours - or that young couple across the aisle. What you will see in the next seventy minutes could have happened to you. For the facts are actual."

A solidly made if overly familiar '50s noir, The Hitch-Hiker tells a claustrophobic and typically dark tale which, ironically, takes place mostly in the sun-baked desert vistas of Mexico. The tense drama centers on Edmond O'Brien and Frank Lovejoy as two vacationing buddies who unwittingly take on a psychopathic criminal as a passenger, effectively played by William Talman. Kino Classics' DVD edition uses a sharp looking, resotred print for this notable film from trail blazing director Ida Lupino.

Lupino guides The Hitch-Hiker (in addition to directing, she co-wrote the screenplay) in a straightforward manner reminiscent of a particularly grim installment of Dragnet. Try hard not to murmur to yourself that "only the names have been changed to protect the innocent" as we get acquainted with Roy Collins (O'Brien) and Gilbert Bowen (Lovejoy), longtime friends taking a forbidden fishing trip away from their wives' watchful eyes. Tooling through seedy Tijuana, Mexico, the men happen upon a wiry-haired hitcher needing a lift. It doesn't take long, however, before the passenger pulls a gun on the men and reveals himself as Emmett Myers (Talman), an escaped convict and murderer on the lam from authorities in California. Within a few minutes, the friends' carefree getaway becomes a tense stand-off between the wanted killer and the ordinary men thrown into extraordinary circumstances, in a harsh landscape unknown to all three. At gunpoint, Collins and Bowen transport Myers through the desert toward the Mexican port town where Myers plans to make his final getaway. Since the two friends' wives don't know their whereabouts, it appears to be a perfect plan, yet Myers can't count on the two conspiring to get away unharmed (despite being capable of watching them constantly, due an to old injury that prevents his right eyelid from fully closing). The search for Myers intensifies as American authorities eventually deduce that he's on the run in Mexico, alerting the local police. Meanwhile, the increasingly desperate fugitive/hostage situation becomes a taut, intimate clash between the mentally unstable captor and two men who wonder if they'll ever see freedom again.

Lupino's decision to pare down this simple story to its essence makes The Hitch-Hiker a tight, bracingly realistic watch. She also gets some excellent acting from the three main players - especially William Talman, who gives Myers plenty of menace but also some vulnerability as well. Directing-wise, she doesn't do too much that would be considered out of the ordinary (the film's most unique segments are the long scenes spoken in Spanish with no subtitles), and the standard true-crime plotting plays out rather predictably. Still, it's an achievement for one of the few women active in directing at the time. The Hitch-Hiker was the fourth film bearing Lupino's credit as director, and the first dealing with a male-oriented theme. It was a huge step forward, especially when considering that the sole other female director working in Studio-era Hollywood, Dorothy Arzner, only got assigned to handling "women's pictures."

Although Lupino did a capable job directing The Hitch-Hiker, the limitations in the story prevent it from being as memorable as other crime dramas of the period. For her follow-up film, The Bigamist, Lupino teamed again with Edmond O'Brien for an even more topical story in which the stolid actor played a man with wives in two different cities. That film had its flaws as well, but it's worth seeking out as a companion to this film for its candid, sympathetic treatment of an out-there (for the '50s) subject. 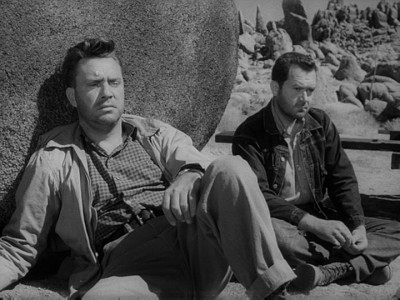 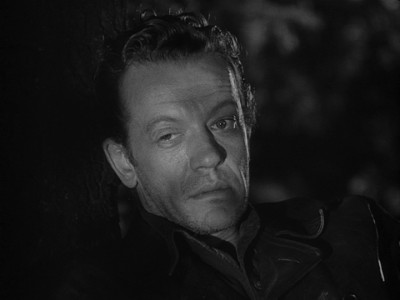 For The Hitch-Hiker, Kino used a restored archival 35mm print preserved by the Library of Congress. The 4:3 picture shows some signs of aging, but for the most part it looks fantastic with subtle, textured greys and darks that convey atmosphere without overwhelming the picture. One scene contains a weird, repeated edit, which I assume was in the original cut of the film.

The film's original mono soundtrack is the sole audio option here, an agreeable mix that (like the image) is nicely preserved if not particularly outstanding. Some scattered instances of weirdly overdubbed dialogue come up. No subtitles are provided.

The sole notable bonus is an image gallery containing publicity photos and promotional materials from its original release. While an original theatrical trailer would have also been a nice extra, the disc contains trailers for other Kino releases White Zombie, The Stranger (both of which don't appear original) and Night Tide.

Gritty noir, solid if not particularly outstanding, The Hitch-Hiker nevertheless stands as a good, meaty entry in the filmography of pioneering actor-turned-director Ida Lupino. Fine performances and a polished print on Kino Classics' DVD makes this a worthwhile watch for '50s drama fans. Recommended. 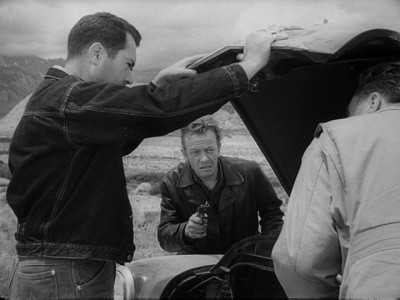 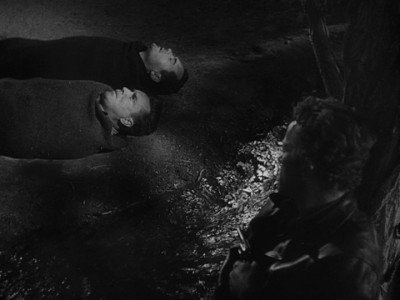