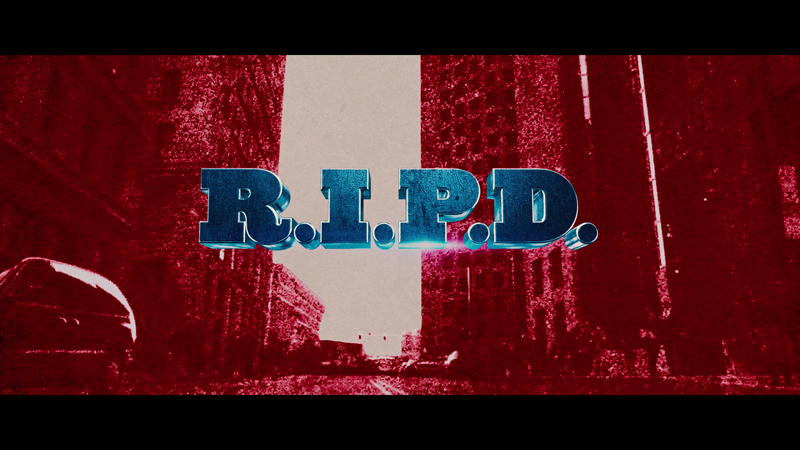 Nick (Ryan Reynolds) is a Boston cop with a loving wife (a situation that's laid out in one of the most telegraphed pieces of exposition ever), but he's also been up to no good in conjunction with his partner Hayes (Kevin Bacon.) When a raid goes wrong, he soon finds himself as a member of the R.I.P.D., under the leadership of Proctor (Mary-Louise Parker) and with his new partner, a western sheriff named Roy (Jeff Bridges.) Roy is no-nonsense, and doesn't have much patience for training the newest member of the force, but they have a job to do, so they form an uneasy alliance. During their efforts to track down the "deados," a larger plot reveals itself, and the fate of the world is put into peril. Meanwhile, Nick has trouble letting go of his former life, whether it's his wife or his former partner. 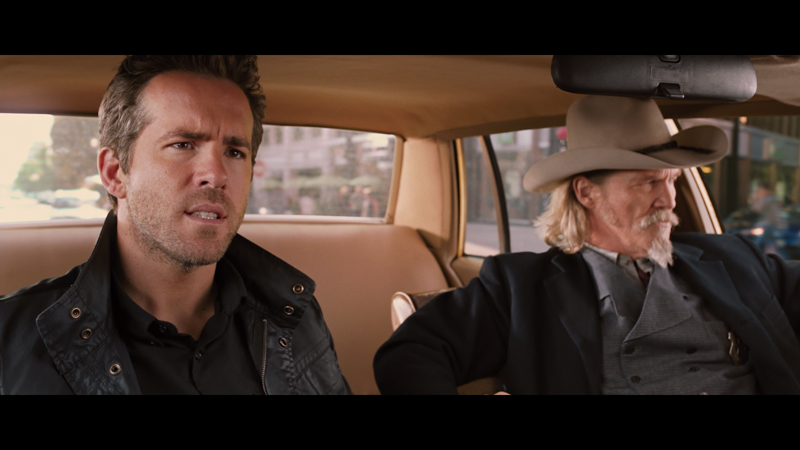 The sci-fi action makes up the core of the film, which consists of several big blow-out battles between the R.I.P.D. and the baddies, but the film has a decent sense of humor as well, with Reynolds doing his usual wiseass act and Bridges being his awesome self as the gruff frontier cop obsessed with the fate of his remains at the hands of some scavenging animals (Bacon even gets to chase some laughs, even if he doesn't quite succeed.) The main comedy conceit of the film though is the idea of the avatars. While investigating amongst the living, Nick and Roy don't look like themselves. Instead, they look like an elderly Chinese man (James Hong) and a blonde supermodel (Marisa Miller). It seems like an entirely simple sight gag that wouldn't work beyond their first appearance, but somehow it keeps getting laughs by raising the stakes and making their appearances even more ridiculous. Perhaps it just feels funnier by comparison though with the rest of the film.

The main problem (among several) with R.I.P.D. is the pacing. The start of the film is so long and frankly boring that you can't help but figure out where it's going before you're supposed to, which makes it seem even slower than it is. Then, once the action really gets started in earnest, it just piles the shootouts and chases on top of each other, to the point where it becomes pointless overkill. There's no reason why insane action can't work (Shoot ‘Em Up and Crank are certainly good times) but there's an attempt at blending the silly comedy represented by Hong's appearance as a cop with high-octane action and a legitimately emotional storyline involving Nick and his wife, and it all ends up in a mish-mash. The problem is, it's fun to watch Bridges, so you can't dismiss this movie entirely, despite how enticing the opening scenes make that seem. 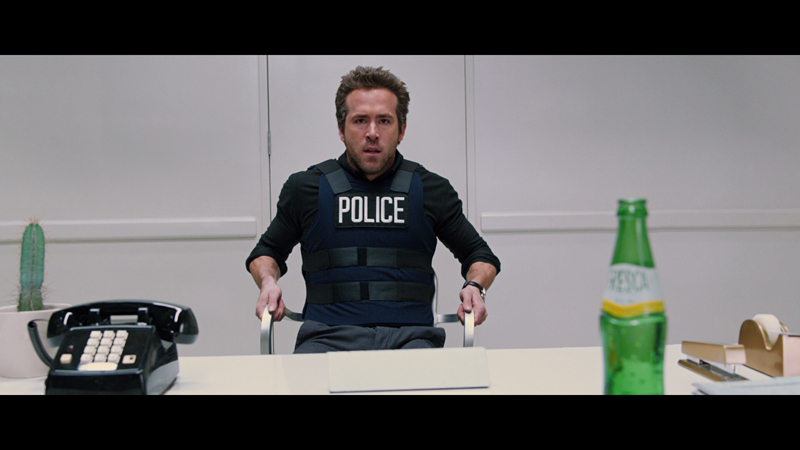 The Discs
This set includes discs, one Blu-Ray and one DVD, which are packed in a standard-width dual-hubbed Blu-Ray keepcase, inside a foil-embossed slipcover. The Blu-ray sports the standard Universal curve menu, offering options to watch the film, select scenes, adjust the set-up and check out the extras. Audio options include English DTS-HD Master Audio 5.1 and French and Spanish DTS 5.1, while subtitles are available in English SDH, French, Spanish.

The Quality
The 1080p, AVC-encoded transfer is loaded with fine detail and boasts appropriate color throughout, though the overall image is just south of perfect, thanks to a picture that features some minor imperfections, including some very slight digital distractions. The clarity of the transfer does have a bit of a downside, as the frequent CG work is overly obvious in many places. The issues are mainly going to be a problem for nitpickers though, as the fast-paced film doesn't let your eyes linger anywhere too long.

The 5.1 DTS-HD Master Audio track is also an excellent complement to the film, delivering a complex mix that brings crisp, clean dialogue in the center channel, and then layers in a dynamic mix in the surrounds that includes excellent panning and positioning on the special effects, a great, energetic score and some immersive atmospheric effects that fill out the soundstage well. The low-frequency effects could have a bit more oomph considering the level of action in the film, but the mix has enough going on to overcome any shortcomings in the bass.

The Extras
The extras start with a pair of alternate opening scenes (4:37 and 5:29), which are slight variations on one idea, jumping right in with Roy on the beat (with one featuring rough, unfinished CG work, showing how motion capture was utilized.) This was a better way to start the film, though it does nothing to solve the slow follow-up scene. Considering how different it is from the start of the finished film, down to different title styles, it smacks of a focus-group decision.

Four alternate/deleted scenes (running a combined 7:15) are mostly slight variations on what is in the actual movie, but not different enough to be very interesting. Again, there's some unfinished animation in one scene, so the opportunity to see some rough footage is the main reason to check this out.

A 3:48 gag reel, featuring a lot of raw greenscreen footage, is a lot of fun, largely thanks to Bridges, who just seems like a blast to work with. Meanwhile "Nick's New Avatars" is a quick one-minute reel of alternate avatars that's actually funny. It's stuff like these bits that are a big part of why the extras are actually more entertaining than the movie itself.

Four featurettes make up the bulk of the extras, starting with "Anatomy of a Shootout" (7:59), which goes behind the scenes of the film's climactic final battle. It's a surprisingly tech-heavy piece, focusing on the camera rigs used, the greenscreen work and the motion capture done for the monsters. The camera gear is particularly interesting, while there's more on the film's heavy special effects, particularly the big action scenes, in "Filming the Other Side" (6:29).

"Transferring R.I.P.D." is the longest featurette by a few seconds at 8:18, spending the time mainly on the translation of the original comic books to movie, via plenty of interviews and on-set footage. Putting a cap on the behind-the-scenes portion of the extras package is "Walking Among Us: Deados & Avatars" (7:25) which spends some time highlighting the actors portraying Roy and Nick's alternate looks and the creepy creatures they hunt.

There's also a set of motion comics that run 6:08, but all this is is a selection of scenes from the movie done with limited animation, showing the scenes the way people would have seen them, thus it's all the guys' avatars. The joke worked better in the movie.

Wrapping things up, there's also a code for a Digital Copy, as well as a code for a discount on the R.I.P.D. video game on Steam. 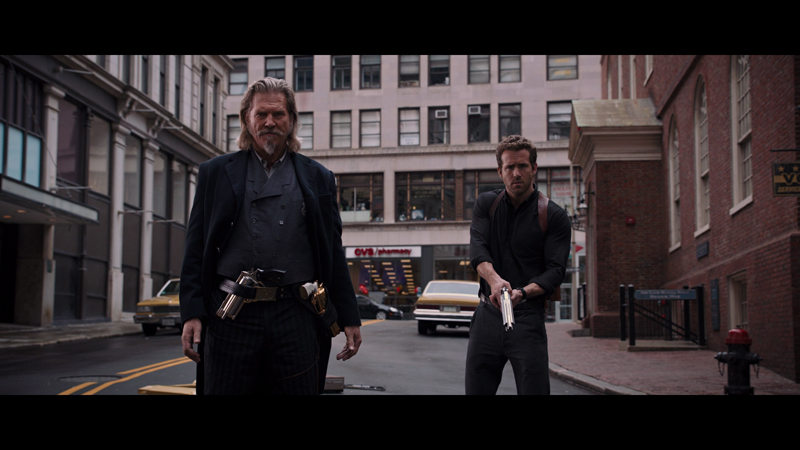 The Bottom Line
I really wanted R.I.P.D. to be good, considering the trailer looked great and the film stars two actors I really enjoy, but it just didn't come together outside of Bridges' character, which is likely just Bridges. On the other hand, the quality of the presentation is excellent and there are some entertaining extras. It's not a terrible film, but there are just so many better options out there, so you owe it to yourself to be judicious with your time.