Anchor Bay Entertainment // Unrated // November 12, 2013
List Price: Unknown [Buy now and save at Gateway-films]
Review by Francis Rizzo III | posted November 1, 2013 | E-mail the Author
Note: Ricky Roxburgh, the screenwriter of Saving Santa, attended Hofstra University with me, and he was one of my writers when I served as editor-in-chief of Nonsense, the school's only intentional humor magazine. I attempted to not hold that against him as I wrote this review. After watching the film, I am just thankful I don't have to worry about hurting his feelings.

It's that time of year when more new Christmas movies attempt to stake their claim on the holiday season and become another classic pulled out for repeated viewings when the weather gets cold. The last one I remember with any fondness is Arthur Christmas, a British production from Aardman, about Santa's youngest son trying to keep his dad's yearly mission fully complete. Now we have Saving Santa, another Brit-heavy film, which. from the title, sounds like another "help Santa do his job" adventure. Instead, this film takes place before Santa can even leave the ground, thanks to the misadventures of Bernard D. Elf (voiced by hobbit extraordinaire Martin Freeman.) 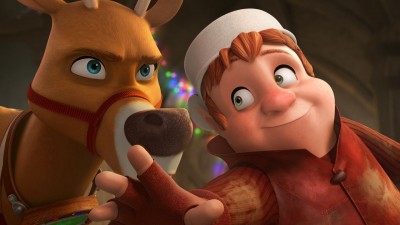 Bernard is a wannabe inventor elf working for Santa as a reindeer pooper scooper. He has come up with some impressive gadgets that would be of great help to Santa, like a memory eraser for when kids spot him, but they tend to have a flaw that puts others in harm's way, so he is stuck in his dead-end job. However, when one of his inventions catches the big man's eye, he is let in on a secret. The way Santa is able to deliver all those toys in one night is his timeglobe, which lets him bend time. Getting Santa's confidence boost's Bernard's, but he's pushed into duty quicker than expected, when air-delivery adventurer Neville Baddington (Tim Curry) sneaks up on the North Pole and takes Santa captive, forcing Bernard to use the timeglobe to escape and go back to warn Santa.

As with most things involving time travel, and certainly most things involving Bernard, it does not go smoothly, and soon time paradoxes become a major concern. Aided by famed reindeer Blitzen, whom Bernard has outfitted with a faulty, unintelligible voice translator, Bernard manages to frequently screw up his mission, leading to an array of calamitous attempts to stop the siege. That's pretty much the extent of the plot, but when you involve time travel, you end up with a lot more happening in a compressed space.

Written by first-time feature scribe Ricky Roxburgh and co-directed by animation vets Leon Joosen and Aaron Seelman, the plot moves well for most of the film, thanks to Freeman's ultra-likable elf and a clever, well-plotted script with a steady stream of gags in the dialogue (including a classic Christmas-lights joke that I would be praising even if I didn't know the writer since I was a teen). There are only a few places where the film gets off track, and that's normally where musical numbers have seemingly been wedged in, including a rather unnecessary song by Ashley Tisdale, who plays an elf in the film. That's not to say all the music is off, as the first number, sung by Freeman, somewhat out of nowhere, strikes a proper balance between story and song. But with the flow of action, the songs are more roadbump than anything else.

The cast is solid across the board, with Freeman and Curry playing their roles with just the right tone, as they are wont to do, and Tim Conway (who based on cast lists online, replaced Tom Baker) turning in a pitch-perfect Santa; authoritative, yet warm. Meanwhile, in one of the more unusual animation casting choices in recent memory, Joan Collins (seriously, Joan Collins) as Neville's mother, gets to be her trademark, soapy brand of evil, in her first role in almost three years. The voices are complemented well by the stylishly-designed animation, provided by Prana Studios (Hoodwinked!, Planes). So often, independent animation looks like it's something less polished than the big boys, but Bernard and friends are impressively rendered, and done so with cinematic style and a fresh look that doesn't fetishize photo-realism. Perhaps it's because I watched this after Alpha and Omega 2, but this is a solid-looking animated film.

Saving Santa is unlikely to earn an annual spot in your Christmas viewing line-up, mainly because it's actually not hugely focused on traditional Christmas matters (though the ending neatly ties several throughlines it all together, like any good holiday film should.) It's a Christmas film the way Die Hard is a Christmas film, if John McLane was an Elf, and Reginald VelJohnson was Santa (and how do we know that's not the truth?) However, between the time travel, Christmas vibes, funny jokes and pop tunes, there really is something for everyone in the room, which is all we really want around the holidays.