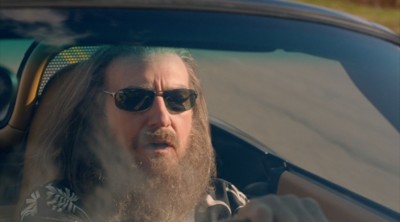 Actors are sometimes accused of playing themselves over and over again, but Larry David has literally played the character "Larry David" for over a decade on HBO's Curb Your Enthusiasm. It should come as no shock then that, even though David is playing a different character in his new HBO film Clear History, with a different name (two, in fact), he still seems to be playing Larry David. Hey, technically, Jerry Lewis played a lot of "different" characters too.

The premise of Clear History is a doozy, though, and perfectly suited to David's cringe-comedy sensibilities. Nathan Flomm (David, unrecognizable in long brown hair and nearly ZZ Top-length beard) is co-founder and head of marketing for a California electric car company run by Will Haney (Jon Hamm, who seems to spend all his time away from Mad Men flexing his wicked sense of humor). Haney is fond of Ayn Rand and has named his son after her Fountainhead character Howard Roark. In fact, Haney decides to name his company's new car the "Howard." Flomm refuses to market a car called Howard and quits the company and sells his shares. The Howard becomes a phenomenon on par with the iPhone, and Flomm becomes infamous for being the guy who gave up a billion-dollar stake in a major corporation. 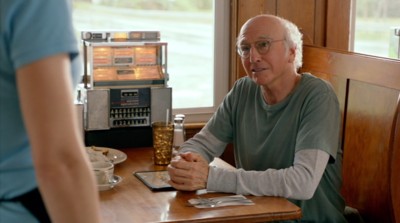 Years later, Flomm has cut his hair (so he resembles the Larry David we all know), moved all the way across the country to Martha's Vineyard, and has taken on a new identity as Rolly, a simple man who works as a caretaker for an old woman named Tibby. He's well-liked by his neighbors, who just think of him as a nice man and don't know who he actually is (a fun running gag in the film has the proprietor of a local diner gradually coming to realize - at the same time that Rolly's fake identity falls apart - that he is also not a nice man after all). It's at this moment that Will Haney - the bane of Rolly's existence - buys a home on Martha's Vineyard with his beautiful wife Rhonda (Kate Hudson). When he is confronted with the horrifying news, Rolly figures he'll just have to move away again, but then the film version of The Fountainhead pops on TV while he's packing. Rolly suddenly takes the story to heart and makes the twisted realization that he needs to enact revenge. Of course, since this is a Larry David comedy, he ends up thwarted at pretty much every turn, often by his own actions and attitudes.

David and his long-time writing team of David Mandel, Alec Berg, and Jeff Schaffer (responsible together for EuroTrip and separately for TV's The League, the Clerks cartoon, and much more) perfectly structure the comedy, managing to make seemingly pointless character moments actually come back to stir up trouble for Rolly in key moments later. Director Greg Mottola (Superbad, Paul) is used to working with auteur comedy writers, and he gets the laughs out of scenes mostly by getting out of Larry David's way.

The ensemble supporting cast of Clear History is uniformly tremendous. Danny McBride, who is usually a turn-off for me, offers a charming performance as Rolly's only friend to know the truth. Curb's J.B. Smoove, as Jaspar, is once again a perfect tormentor for David's character, after Rolly tells Jaspar's fiancee (Eva Mendes) that she should sow some wild oats, thus ending their engagement. Amy Ryan (The Office) is Rolly's adorable ex, whose love of the band Chicago goes deeper than he would have any reason to suspect. A hammy Michael Keaton and Bill Hader show up as goofy demolition experts, interested in helping Rolly get back at Will Haney. That's not to mention smaller appearances by Philip Baker Hall, Lenny Clarke, Peter Farrelly (who put David in his version of The Three Stooges), and an uncredited Liev Schrieber as a Chechen criminal intent on making Rolly half a eunuch. 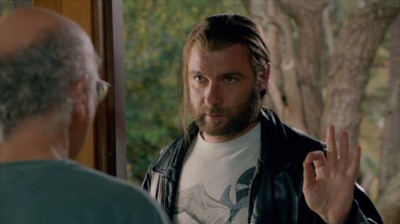 The Video:
The 1.78:1 image is pretty much exactly what you would expect from a brand-new HBO production. The image is occasionally a little soft, but nothing to significantly distract from the enjoyment of the comedy.

The Audio:
The disc offers English 5.1 and Spanish 2.0 tracks. The movie is pretty talky, so the surround channels mostly come into play during appearances by those classic Chicago songs and the very Curb-like musical score by Ludovic Bource (The Artist). There are a few big sound effects moments that resonate nicely, and otherwise the rear channels mostly highlight general atmosphere (birds chirping outside, etc.)

Special Features:
Nothing, apart from a few forced previews when you pop in the disc. 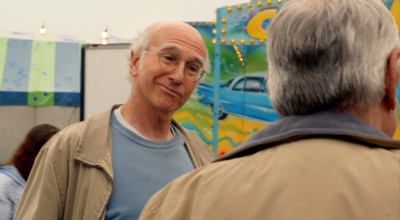 Final Thoughts:
The strong cast, led by Larry David, is easily the biggest asset here. If, in the end Clear History is a little too lightweight to warrant repeated viewing, it offers enough solid belly laughs to make viewing it once truly worth it. Recommended.