"How about a nice game of chess?" Since the inception of computers, a popular use for computer hobbyists has been to program them to play chess. While they were able to do this graphically by the 1980s, they started out by simply computing and displaying the moves via text onscreen, which is how it's done in Computer Chess which takes place in 1980. The focus is on a tournament at a hotel, where several computer scientists gather their equipment in the conference room and have one program play against another, with the humans keeping score by moving the actual chess pieces. The winning programs are played against other winning programs until the ultimate winner is then pitted against the event's organizer, chess champion Pat Henderson (Gerald Peary). The participants continuously ponder the concept of a computer being able to beat a human at chess, and speculate that it probably won't be possible until 1984. 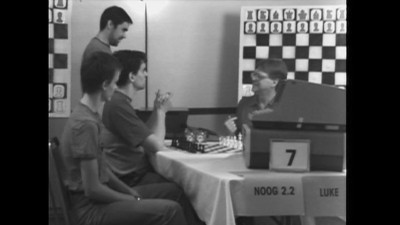 Computer Chess is done in a unique "mockumentary" style- the first thing viewers will notice is that it's shot on black and white video. The tournament is being videotaped with a Sony camera and over-the-shoulder open-reel video recorder- near the beginning we see some footage of the outside of the hotel until Pat Henderson yells at the cameraperson not to point the camera at the sun as it will burn the tube out and orders him to only shoot indoors. However the movie breaks from strictly using this documentary footage as several characters are followed to different rooms and the cameraperson himself is seen with his equipment. While the production usually tries to look authentic, there's many signs of post-production editing such as cuts between characters as they speak and of course many scenes where the cameraperson wouldn't have been there to shoot them.

Still, Computer Chess for the most part plays everything straight, to make anyone unfamiliar wonder if they're watching actors or footage of something that really happened. Most of the details are dead-on, including the fashions and hairstyles. I loved the ‘art' in many of the hotel rooms as well, most of it framed line designs that were common then. While almost everyone these days has some type of computer, in 1980 they obviously weren't as sophisticated as they are now and were used mostly by "nerds" who were interested in their inner workings and how to make them do new things, not just type their papers or follow celebrity gossip. Thus there's a lot of tech-speak, including scenes where characters hang out in their rooms talking. Stereotypically computers were primarily a male-dominated interest, with just one female participant here (Shelley, played by Robin Schwartz) whom the others awkwardly try to hit on. Adding to the fun is another group also at the hotel for a spirituality gathering, where African guru Keneiloe (Tishuan Scott) leads participants in a variety of bizarre meditation and relaxation exercises. They conduct their meetings in the same conference room where the chess tournament is held, and the two groups clash when it turns out they've been booked for the room at the same time. There's a hilariously awkward scene where one married couple invites introverted graduate student Peter (Patrick Riester) into their room and tries to get him to join in on their own exploration. There's also a large number of cats hanging around the hotel, which isn't explained. 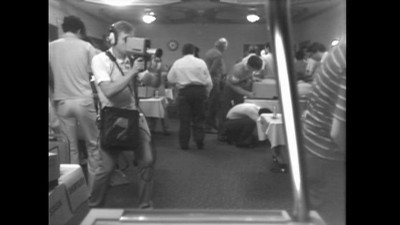 Sometimes it's fun when something is intentionally made to look less than great. Although I was not able to find exact details on the production, at least some of it was shot with a black-and-white Sony AVC-3260 video camera made in 1969. These of course were too primitive for professional productions even back then but were used by early video hobbyists and smaller organizations. Having seen some older footage shot with these, much of Computer Chess looked just a bit less primitive- while bright objects still cause a bit of a smear as the camera moves, the effect isn't as pronounced as it is typically. The frame rate here is also processed at a more film-like rate. There are a few glitches throughout where the picture cuts to black for a split-second and there is also some interference, which I'd be interested to know whether that was added in post-production or actually occurred during shooting. My one criticism is that these cameras were already quite old in 1980 when Computer Chess takes place, and while black and white cameras were still available and cheaper than color ones, it seems that a real event of this type would have been shot in color then. I personally would have kept the video at its native 30 frames per second as well.

The sound mix is a bit too good for this production, as it's in true stereo (in 2-channel Dolby Digital on the DVD.) Most of the location audio keeps voices in the center but spreads ambient sound to the front left and right- an actual production of this type shot in 1980 certainly would have been in mono using only one microphone. There's also a slight electronic music score along with a few folk guitar songs accompanying some scenes. 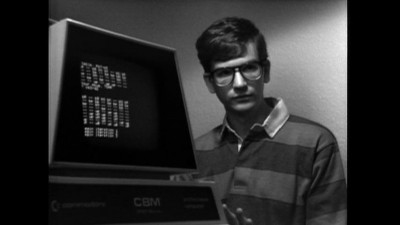 Two commentary tracks accompany the movie. The first is with Murray Campbell, a long-time computer scientist who helped to program "Deep Blue," the first computer chess program that actually did beat a human player in a game. He makes a few comments on the movie's authenticity, including that real chess competitions usually had a friendlier and less competitive atmosphere than the one depicted here. The second commentary is a bit of a joke, listed as "an enthusiastic stoner" who introduces himself as Ken Osborne. I did not have time to listen to all of this one, but he acts as if he has never seen the movie before and tries to guess what's going on.

A "Crowdfunding Plea Video" shows director Andrew Bujalski trying to pitch Computer Chess to a major studio executive who doesn't understand the concept, and saying "We aren't going to raise funds this way!" and asking for donations to fund the production. A Sundance Film Festival promo, shot in the same black-and-white style as the movie, shows Bujalski explaining the movie to a computer voice, and animations of some actual computer chess games that were referenced during the movie's production are shown along with a section of "Hot Old Personal Computers" where we see some color shots of some of the vintage computers used in the movie. I had hoped the "1969 Sony AVC-3260 video camera tutorial" would be an actual piece shot back then, but it's a recent production shot on color 16x9 video where director of photography Matthias Grunsky shows us the camera and a few tricks he did with it to get the brightness levels the way he wanted them. (I still wish more technical info about the movie's production had been included.) Finally there are three trailers for the movie.

The DVD's cover mimics the style of the third generation of Sony's blank Beta tapes, and although there is no insert inside I laughed at the DVD's label which makes the disc look like an old videotape reel. 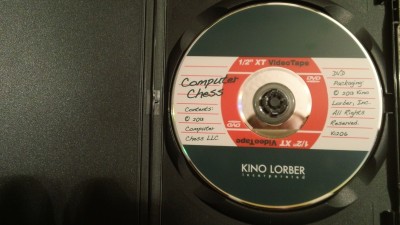 Computer Chess is certainly a daring production that not everybody will "get", but will be a lot of fun for those who do. It's always fun to revisit the dawn of personal computers (my dad bought an Apple II in 1981 so I was exposed to them rather early, although nowadays I'm not so computer-literate with the last few generations of technology), and being a fan of older video equipment I certainly enjoyed the use of the vintage camera to shoot it. I'd certainly like to see more productions use still-working older equipment and try to recreate the time when they were new technology- perhaps a recreation of home movies with the 1972 Cartrivision system?